Give a Rouse: Meet Erin Klein, Dartmouth Class of 2013

As with many new arrivals, Erin Klein ’13 of Park Ridge, Ill., came to Dartmouth unsure of what she wanted to study. However, she knew she was interested in health care. Forging ahead, Klein immersed herself in the sciences—physics and chemistry followed by biology courses. 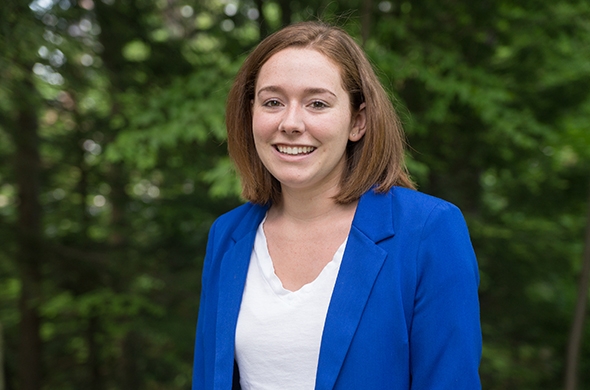 Erin Klein ’13 has taken the Medical College Admission Test as a prelude to medical school. In the interim, she will work as an analyst for a health care consulting firm in Boston that has an extensive diabetes practice. (Photo by Eli Burakian ’00)

During her first two years, she worked as a laboratory research assistant. “I was even included as an author on a paper in Clinical Cancer Research, looking at the role of microRNA in pancreatic cancer,” Klein says. “However, my time in the lab taught me one thing—that I did not want to pursue a career in research.”

But Klein has not totally abandoned the sciences, having taken the Medical College Admission Test (MCAT) as a prelude to medical school. In the interim, she will work as an analyst for a health care consulting firm in Boston that has an extensive diabetes practice.

When not engaged in science or health care, Klein has truly accepted the ethos of a liberal arts education, having taken classes in 16 different departments. But, she says, “I have learned as much outside the classroom at Dartmouth as I have in my classes.”

A theater minor, Klein participated in a production of The Vagina Monologues as part of V-Week, Dartmouth’s yearly campaign to end violence against women.

“I met many amazing women through working on V-Week, and I wanted to create a space to continue the conversations we began in rehearsals,” says Klein. She went on to found the Women’s Forum, a weekly discussion group that brings together women from all over campus to share experiences.

“I have gained so much at Dartmouth through engaging with thoughtful peers, faculty, and staff members over the past four years,” says Klein. “I’ve learned how to think critically and how to be a thoughtful activist in advocating for women and improving our campus climate. I have learned a lot from the amazing people around me—about both academics and the kind of person I want to be.”

Read another profile of a member of the Class of 2013: