Give a Rouse: Meet Jacob Hickson, Dartmouth Class of 2013

Jacob Hickson '13 will miss this year's Commencement due, in part, to last year's event. In the spirit of the 2012 Commencement speech by Teach for America (TFA) founder Wendy Kopp, he will be off to Tulsa with TFA. The organization is a nonprofit national teacher corps that enlists top college graduates to teach in under-resourced urban and public schools, with the goal of raising the quality of education in poor school systems. 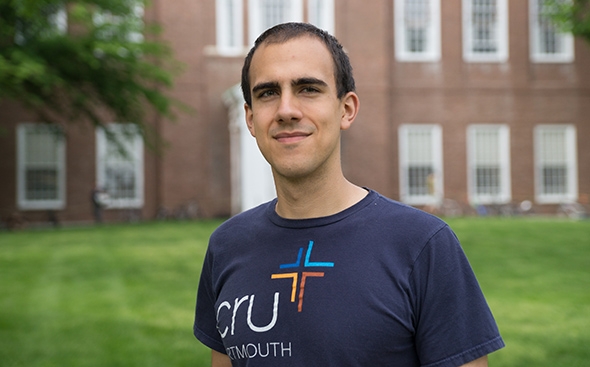 "Dartmouth has provided me a measure of technical skill in statistical analysis, computer programming, and critical writing, as well as the ability to speak Chinese," says Jacob Hickson ’13. (Photo by Eli Burakian '00)

Hickson came to Dartmouth from the relatively mild climate of Lebanon, Tenn., but New Hampshire reawakened memories of the snow-filled Michigan winters of his early youth. In addition to his desire for colder climes, he says that he was drawn by Dartmouth's "prestige, phenomenal program opportunities, and generous financial aid."

A major in economics—with minors in public policy and Chinese—guided Hickson to the Nelson A. Rockefeller Center for Public Policy and the Social Sciences at Dartmouth, where he entered its First-Year Fellows Program. The fellowship enabled him to intern with the U.S. Department of Education Office of Postsecondary Education in Washington, D.C., Hickson also took advantage of the center's program in management leadership and development, and Rocky Voxmasters, which focuses on public speaking.

"My time at the Rockefeller Center taught me a great deal about professionalism and how to integrate my passions into my work," Hickson said. "I have learned to communicate and have learned the value of listening and attending to the needs of others."

Hickson has a deep commitment to Cru (Campus Crusade for Christ), a campus ministry focused on fostering spiritual conversations and being a caring community that is passionate about the person, teaching, and works of Christ. His enthusiasm also extends to volunteer social programs, including the Upper Valley Haven shelter in White River Junction, Vt., the Haven's After School Program for children, and LEAD—a mentoring program under the aegis of the William Jewett Tucker Foundation.

Hickson explains that LEAD pairs Dartmouth students with children from a local low-income housing community. "The program provides opportunities to explore the world beyond their neighborhood and inspire college aspirations."

"Dartmouth has provided me a measure of technical skill in statistical analysis, computer programming, and critical writing, as well as the ability to speak Chinese," Hickson says. "Perhaps more importantly, I have learned the crucial nature of a supportive community and the value of building meaningful relationships in that context."

Read additional profiles of members of the Class of 2013:

Give a Rouse: Meet Erin Klein, Dartmouth Class of 2013

Give a Rouse: Meet Mahmud Johnson, Dartmouth Class of 2013

Give a Rouse: Meet Gurveen Chadha, Dartmouth Class of 2013

Give a Rouse: Meet Greg Buzzard, Dartmouth Class of 2013

Give a Rouse: Meet Marina Villeneuve, Dartmouth Class of 2013

Give a Rouse: Meet Rachel Abendroth, Dartmouth Class of 2013