Give a Rouse: Meet Mahmud Johnson, Dartmouth Class of 2013

When Mahmud Johnson '13 came to Dartmouth from Monrovia, Liberia, he took the words of the College's 12th president to heart. 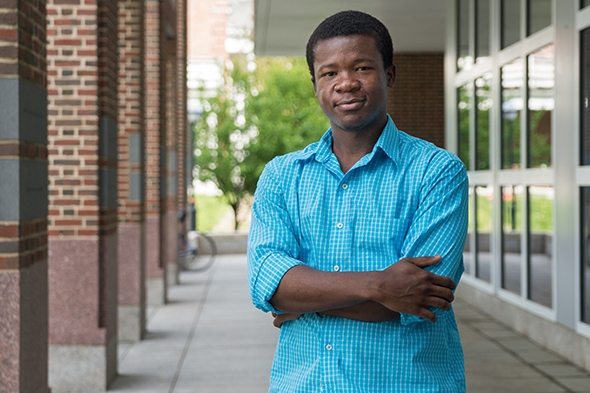 Mahmud Johnson chose economics as his major based on his interest in understanding the economic development process and how poor countries can become economically better off. These interests are particularly relevant to his native Liberia, he says. (Photo by Eli Burakian '00)

John Sloan Dickey '29, in his 1946 Convocation Address, said, "The world's troubles are your troubles ... and there is nothing wrong with the world that better human beings cannot fix."

"I look upon President Dickey's pronouncement as a call to action," Johnson says. "Making the world's problems our own is actually possible, and this is the first step toward solving them."

Johnson chose economics as his major based on his interest in understanding the economic development process and how poor countries can become economically better off. These interests are particularly relevant to his native Liberia, he says.

"In support of my economics studies, I challenged myself to take classes in other disciplines that approach the issue of long-term growth from different perspectives."

The study of human geography was a priority for Johnson. This is the study of components of culture and how they change as people move about, a crucial factor in considerations of large-scale development processes.

Government classes also provided him with a needed background. "I have learned about how different political systems constrain economic decision making, and how the politics of reform factor into economic policy making," says Johnson.

He took an engineering class, "Principles of Systems Dynamics," in which he learned about feedback loops—systems that self-correct, based upon differences between the actual output and the desired output. For instance, the scarcity and competition (the supply) for real estate today feed back into the system, raising prices and making it difficult for buyers. Johnson saw how feedback loops work in complex environments where certain policies might end up having the opposite effect from what was intended.

Johnson is the recipient of a Richard D. Lombard '53 Public Service Fellowship, administered by the John Sloan Dickey Center for International Understanding and the William Jewett Tucker Foundation. "This will support my return to Monrovia to launch the eAcademy for Conscious Social Change," says Johnson. "This is a web-based platform that offers tools for marginalized women and youth in post conflict to start their own micro-NGOs, addressing social issues in their communities."

Johnson says his studies at Dartmouth have helped him develop an ability to approach problems from multiple perspectives. "I am confident that with a great liberal arts education and the connections I have made here at Dartmouth, I am ready to take on President Dickey’s call to action."

Read another profile of a member of the Class of 2013: