Amid a series of dramatic civil rights rulings on voting access, college affirmative action and gay marriage this week, the U.S. Supreme Court rejected a biological father’s custody rights under the Indian Child Welfare Act to the young daughter he has been raising for nearly two years, a decision that N. Bruce Duthu, chair of Native American Studies at Dartmouth, says has limited reach but troubling undertones.

Congress passed the Indian Child Welfare Act (ICWA) in 1978 to end longstanding adoption practices that placed 25 to 35 percent of all American Indian children with non-Indian families. The law states that tribes must participate in adoption proceedings before children of tribal members are adopted outside the tribe. 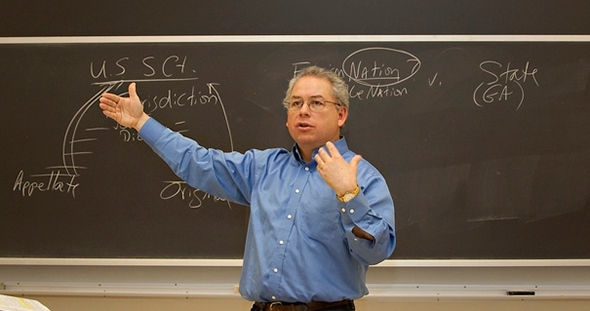 While the Justices ruled 5-4 in the “Baby Veronica case” that father Dusten Brown, a citizen of the Cherokee Nation, could not invoke the protections of ICWA because he revoked his custody rights before the child was born, the majority opinion, written by Justice Samuel Alito, focused from the start on the child and father’s blood percentages, Duthu says.

“In essence, the majority took pains to highlight the biological father’s tenuous ties to Indian identity and refused to allow his ‘drop of Indian blood’—my words—to thwart the claims of the adoptive white couple to the child,” says Duthu.

This is troubling, he says, because the law was written to recognize tribal sovereignty and to keep adoption agencies and courts from meddling in questions of racial characteristics. In fact, membership in the Cherokee Nation has nothing to do with “blood quantity,” but is based on descent from enrolled tribal members.

Federal Indian law assigns rights and privileges based on membership in a sovereign nation, not based on race or blood percentage, says Duthu, a lawyer and the Samson Occom Professor of Native American Studies.

This case, viewed alongside the Voting Rights Act and the college affirmative action decisions issued this week, shows a “growing discomfort with racialization,” Duthu says.

In other words, the conservative justices are signaling opposition to racial classification in the law. The Voting Rights Act ruling lifted the requirements on states with a history of racial discrimination at the polls to clear voting-law changes with the Justice Department, saying, in effect, racism is done with, Duthu says.

While the Baby Veronica ruling is not likely to “do much damage beyond the parties involved in the case,” Duthu says,“I do have concerns that the majority’s insistence on racializing the case may mean that future ‘marginal Indians’ will similarly find it difficult to invoke rights under ICWA.”

And in a broader sense, the work of racial and social equality is not done. “It is not time to say ‘mission accomplished,’ ” Duthu says.