Joel Sternfeld’s Montgomery Fellow lecture takes on a sharp urgency as the renowned photographer arrives in Hanover direct from the tumult of Istanbul’s Taksim Square in Turkey.

Sternfeld ’65, widely recognized as the man who made color photography an art form, began his Montgomery Fellowship residency at Dartmouth on June 19, with the studio class “Word and Image.” He delivers his fellowship lecture, “Letting the Landscape Speak: Utopia and Dystopia in Pictures,” on Tuesday, June 25, at 4:30 p.m. in Filene Auditorium. The event is free and open to the public. 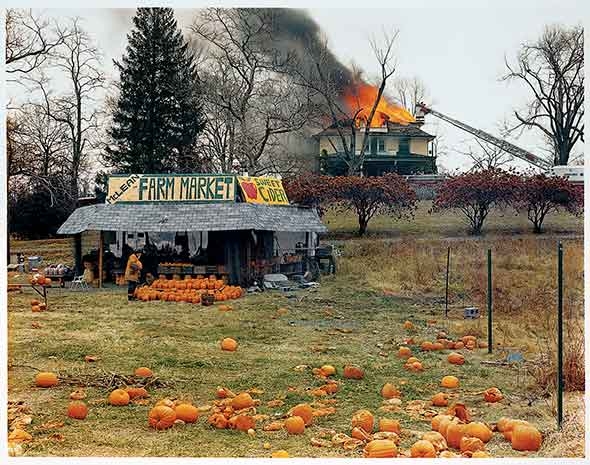 Last week, just before leaving for Turkey, Sternfeld said he was in contact with people close to the anti-government protests in the square who told him about a gathering place for the demonstrators.

“On this trip there is one particular thing that I’m interested in. It is a truck on which people have pinned pieces of paper with their wishes,” Sternfeld says. “This is for a new body of work that I’m doing, but in a way it threads to all my work and to the title of this lecture because my work is about utopia and dystopia and about possibilities.”

In recent days, Turkish authorities have clashed with demonstrators in the square and in other cities and dozens have been arrested as the government tries to put down weeks of protest that started with an “occupy” movement to save an Istanbul park.

Sternfeld, who returned to his family in New York City last weekend and arrived in Hanover on Wednesday, was living on the brutal line between utopia and dystopia just days ago. He says he will tell some stories about that at his lecture next week.

Throughout his career, Sternfeld has explored an uncomfortable line between harmony and discord, utopia and dystopia, man and nature. The poster for the lecture shows “McLean, Virginia (Pumpkins),” from perhaps his best known work, American Prospects (1979 to 1983). In the image, a fireman enjoys an autumn afternoon picking out his pumpkin at a farm stand. Just beyond a sweet cider sign, a house is engulfed in flames as a fire department ladder truck is positioned above it. In his Sweet Earth series (1993 to 2005) he shows the scraps of failed utopian communities such as a faded and dirty geodesic dome on a weedy hillside titled “Ruins of Drop City, Trinidad, Colorado.” This series also makes explanatory text an integral part of the work.

Sternfeld says he expresses these ideas in his photographs through a combination of scene setting and serendipity. In “Pumpkins,” the house was scheduled for demolition and was being burned as a fire department drill, so Sternfeld was there and ready. Late in the day the chief stepped away to pick out his pumpkin. It was that chance moment that made the photograph.

“It didn’t happen utterly by accident, but it didn’t happen by intelligent behavior on my part either,” Sternfeld says. “There is an element of you set your sails, and if you know what you’re doing, the wind comes and fills them.”

Next week he will talk about the voyage that began when he graduated from Dartmouth in 1965.

At Dartmouth, Sternfeld is interacting with students and professors on campus throughout the summer term and he will be teaching “Word and Image” in studio arts—a class he says is also for non-photographers.

Sternfeld says he has a growing interest in the interplay of word and image in the digital era. His series On This Site, for example, is full of mundane images, such as a ratty movie theater seat, that are highly charged through words: “Lee Harvey Oswald was sitting in this seat when he was arrested by Dallas police at 1:50 P.M., November 22, 1963. The double feature playing that day was Cry of Battle and War Is Hell.”

“Almost everybody can make a pretty decent picture these days, even with their iPhone, and there are 275 million decent pictures that are posted on Facebook every day,” Sternfeld says.

“I think in the future, a photographer will be a person who looks at an interesting group of things and adds other information to it, like words or artifacts or other materials, and that we’ll turn to photographers in the same sort of way we turn to other artists for their entire viewpoint.”

Kenneth (’25) and Harle Montgomery established the endowment that bears their name in 1977 to “provide for the advancement of the academic realm” of Dartmouth. Montgomery Fellows, who reside on campus for varying lengths of time, are distinguished figures from academia and outside of it. Fellows have included writers Kurt Vonnegut and Louise Erdrich ’76 and politicians Gerald Ford and J. William Fulbright.