Dozens of students, faculty, and alumni gathered today for the commissioning of four Dartmouth students as officers in the United States military.

At the Army ceremony at the Dartmouth Outing Club House, guest speaker Mahlon Apgar ’62, who was a Dartmouth ROTC member and served as assistant secretary of the Army for installations and environment, talked about service.

“You are taking an oath for a calling,” said Apgar. “You are entering an honorable profession that ennobles the individual while it enables the team. There may be no greater virtue than individual service to others.”

Two students who completed leadership training for the Marine Corps during summer terms, received their Marine commissions at a ceremony in a standing room only Loew Auditorium after the Army commissioning.

“I found, and I hope you will find, that the preparation that you received at Dartmouth will help you do that,” said Fick.

Fick also noted the contributions of President Emeritus James Wright, a former Marine who has written about and advocated for veteran issues, to Dartmouth’s commitment to the military. “When I was commissioned here 14 years ago, the room was not full in the way it is today,” said Fick.

Here are profiles of the four students who received their commissions: 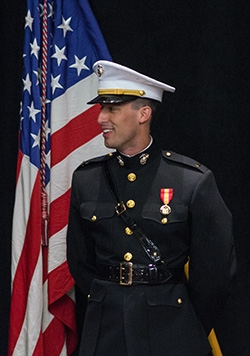 Jack Boger received his commission as a second lieutenant in the Marine Corps.

A history major, Boger has been a James O. Freedman Presidential Scholar and a War and Peace Fellow and has interned in the Sustainability Office. Boger also served as co-president of the Bait and Bullet Club.

Boger, a native of Sandy Springs, Ga., spent the summers after his first year and junior year in Quantico, Va., enrolled in the Marine Corps’ Platoon Leaders Class at Officer Candidates School (OCS). OCS, which lasts six weeks per session, is an intense process that screens and evaluates candidates who are hoping to become officers.

“They’re basically seeing if you have the potential to lead Marines into combat,” says Boger.

Often on little sleep and in hot weather, candidates march up to 12 miles in full combat gear and complete rigorous courses and tactical exercises. They are drilled in the classroom as they learn about navigation, strategy, and the organization of the Marine Corps. Boger says OCS was transformative.

“I’ve had an absolutely wonderful, life-changing experience at Dartmouth,” he says. “But I’ve never felt the sense of purpose and mission that I felt at Officer Candidates School.”

The number of Dartmouth students involved in the military increased during his time on campus, Boger says, and he’d like to see those numbers continue to grow. “Dartmouth has a really storied military tradition,” he says, noting the presence of the College’s large Navy V-12 unit during World War II.

Boger is pleased to become a part of that tradition, and to have “incredible access to Dartmouth alumni,” including many veterans.

Boger will spend this summer taking courses in conflict studies at the American University in Kosovo before enrolling in the Marine Corps’ Basic School, a six-month training program to give officers the skills to lead Marines. 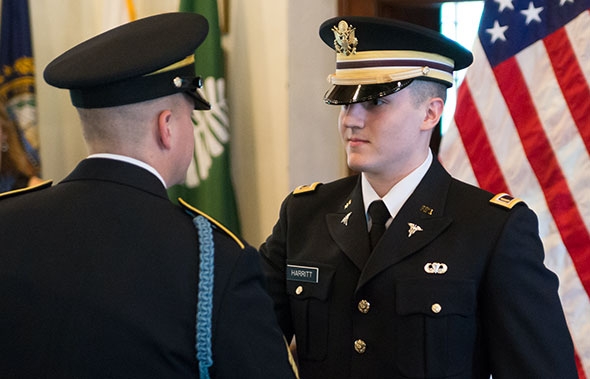 Daniel Harritt received his commission as a second lieutenant in the Army.

Growing up, Harritt wanted to join the Air Force—after all, his father flew bombers for that branch. After being accepted into Dartmouth and the ROTC program, though, that changed. And yet, his career is still in aviation: Harritt will become a helicopter pilot in the Army.

Harritt, who grew up in Hopkinton, N.H., says he had wanted to go to Dartmouth for a long time.

“Growing up in the state,” he says, “I always had a dream of going to Dartmouth.”

On campus, Harritt majored in biomedical engineering, went on an Alternative Spring Break trip, and earned certification from the Army Airborne School at Fort Benning, Ga.  Harritt calls his Dartmouth experience “awesome,” noting that he liked the balance between ROTC training and the rigorous academic environment.

“I think Dartmouth prepares you to think critically,” says Harritt. “As an officer in the military, you are going to have to make tough decisions quickly, and the right answers can’t be found in a textbook. You have to be able to think on your feet.”

Harritt has been accepted into the Army Medevac program. The program accepts only about 20 applicants every year, says Harritt, and he will serve as a pilot of the unarmed medical helicopters. This summer, Harritt will help instruct college ROTC students at Fort Knox, Ky., before heading to Medevac training and enrolling in aviation school.

“I really couldn’t be more proud or more excited to get started,” he says. 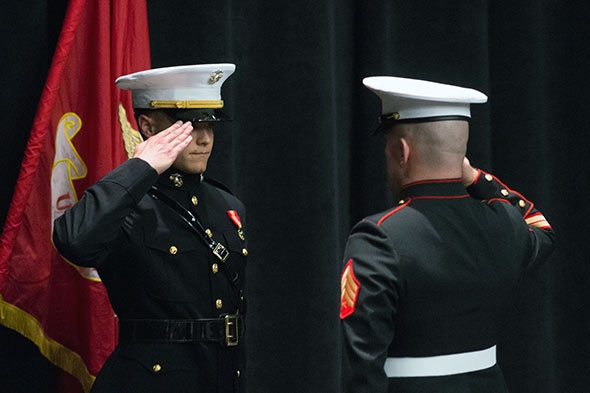 “The diversity and quality of individuals you meet at Dartmouth creates an exciting environment,” says Malkin. (Photo by Eli Burakian ’00)

Joel Malkin received his commission as a second lieutenant in the Marine Corps.

At Dartmouth, Malkin volunteered with students in nearby Thetford, Vt., was a Rufus Choate Scholar, and won the Dartmouth chapter’s Phi Beta Kappa Sophomore Prize for the highest grade point average. This week, he was named one of Dartmouth’s five valedictorians. As busy as he was during the school year, though, Malkin found that summers were even more challenging.

“I don’t know if I’ve experienced anything as demanding as Officer Candidates School,” says Malkin, referring to the Marine Corps’ summer program for college students. Malkin says he found the most difficult part of the training was operating at peak performance with only four to six hours of sleep a night, though as a classics and linguistics double major, Malkin likely had a few late nights at Dartmouth as well.

Malkin came to Dartmouth in part because he wanted to learn about another region of the country.

“I think Dartmouth has given me a perspective I wouldn’t have gotten otherwise,” says the Scottsdale, Ariz., native. “Experiencing New England culture has been an education in its own right.”

While Malkin has enjoyed local culture, he has also appreciated getting to know the diverse group of students at Dartmouth.

“The diversity and quality of individuals you meet at Dartmouth creates an exciting environment,” says Malkin, who finished his 110-page classics thesis this spring. “Dartmouth has been very formative in developing me as a free thinker.”

Malkin hopes to become a helicopter pilot in the Marines. 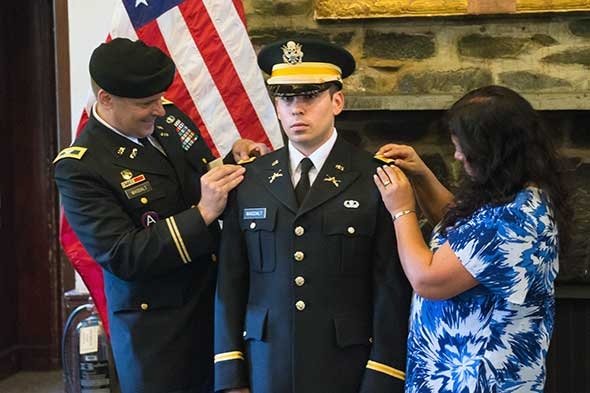 “Dartmouth’s been great, I wouldn’t have had it any other way,” says Wagdalt. (Photo by Eli Burakian ’00)

Paul Wagdalt received his commission as a second lieutenant in the Army.

For Wagdalt, whose father is a colonel in the Army, service is a family affair. But Wagdalt wasn’t always sure he would go into the military. Growing up, he says, it was tough living in eight states and five countries.

“There was never any pressure to join from my father,” says Wagdalt. “Over time, I saw how important the military was, and I knew I wanted to do an ROTC program.”

He felt Dartmouth offered a great combination: an ROTC program and a world-class liberal arts education. Dartmouth’s scenic location in New Hampshire was also a bonus, he says, “The wilderness aspect of Dartmouth appealed to me.”

At Dartmouth, Wagdalt majored in history, was a member of Order of Omega, and served as secretary for the group Por Latinoamerica. During summers, he completed the Army Airborne School at Fort Benning, Ga., and participated in the Drill Cadet Leader Training at Fort Leonard Wood in Missouri.

Wagdalt is thankful for his Dartmouth experience, and says he especially appreciates having gotten to work with “a lot of brilliant professors.”

“Dartmouth’s been great, I wouldn’t have had it any other way,” says Wagdalt. “The academics have definitely helped prepare me for the decision making I’ll need as an officer in the Army.”

In November, Wagdalt will attend the Army’s Basic Officer Leader Course. His father is retiring from the Army in July, and Wagdalt looks forward to spending time with him before he enrolls in the six-month course. Wagdalt will go into the armor branch, which handles tanks and cavalry. He hopes to eventually work in military intelligence.

And so the Wagdalt family tradition of service continues.

In addition, Brian Holekamp ’12, Alessandra Slayton ’13, and Charlotte Williams ’13 will receive their commissions after successful completion of Army or Marine Corps leadership training courses this summer. 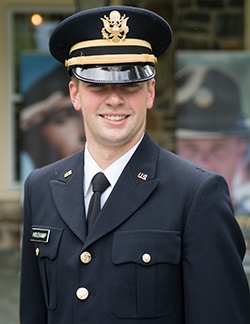 “I’m looking forward to it. I like the organization, the structure,” says Holekamp. “I’ve always wanted to be a part of the military.” (Photo by Eli Burakian ’00)

Brian Holekamp has been accepted into the U.S. Army’s Leadership Development and Assessment Course (LDAC). Upon successful completion of the course, he will receive his commission as a second lieutenant.

At Dartmouth: Holekamp is a fifth-year senior who majored in engineering and economics. In addition, he was president of the club lacrosse team and a member of the Bait and Bullet Club. Holekamp participated in Dartmouth’s ROTC program since his junior year. After his junior year, he completed the Army Leader’s Training Course in Fort Knox, Ky.

This summer, Holekamp will report to LDAC at Joint Base Lewis-McChord outside Tacoma, Wash. Holekamp, who is committed to four years of active duty, hopes to become a combat engineer.

“I’m looking forward to it. I like the organization, the structure,” he says. “I’ve always wanted to be a part of the military.” 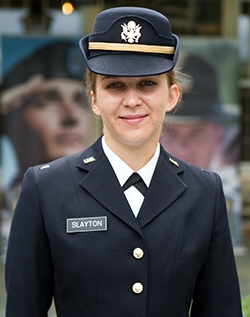 “I think the Dartmouth experience has really helped me come into my own,” says Slayton. (Photo by Eli Burakian ’00)

Alessandra Slayton has been accepted into the U.S. Army’s Leader Development and Assessment Course.  Upon successful completion of the course, she will receive her commission as a second lieutenant.

At Dartmouth: Slayton has been a member of the ROTC program all four years, helped start the online publication Mouth, and wrote for The Dartmouth. “I think the Dartmouth experience has really helped me come into my own,” says Slayton.

The history major says she looks forward to reporting to Joint Base Lewis-McChord in July.

“I know it’s going to be a challenge and I’m looking forward to that,” says Slayton. “I know this will provide a foundation and also give me latitude to go in many different directions career-wise.” 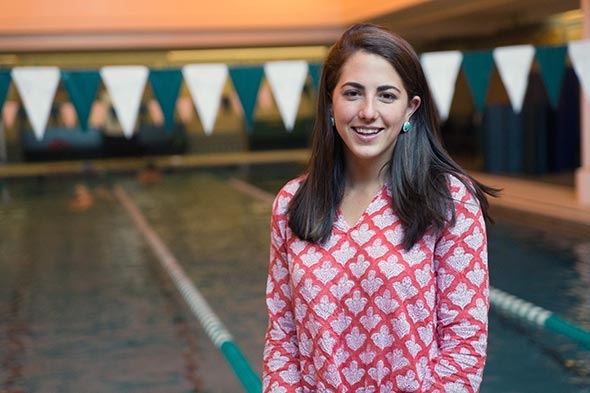 I’d like more women at Dartmouth to consider the military as an option,” says Williams. (Photo by Eli Burakian ’00)

Charlotte Williams has been accepted into the Marine Corps’ Officer Candidate Course (OCC). Williams reported to OCC in Quantico, Va., on June 3.

At Dartmouth: Williams, a history major, was a member of the swim team and set four school records, led three DOC First-Year Trips, and interned at the Department of Justice. “Academically, Dartmouth has done the world for me,” she says. “Dartmouth gives you great opportunities and you have to take advantage of them.”

Williams enjoyed being a leader of the swim team; she hopes the experience will translate to being an officer in the military. “I asked myself, am I really ready to give up that camaraderie?” says Williams. “I realized that I really wasn’t.”

She says her decision often is met with surprise.

“As a female, I’ve heard a lot of ‘You can’t do this, you can’t do that,’ ” says Williams. “My response is, why can’t I? I’d like more women at Dartmouth to consider the military as an option.”