For Robbie Cholnoky ’13, Kevin Dahms ’12, Robbie Moss ’12, and Annie Saunders ’12, four Thayer Engineering BE students who will graduate in less than a week, a good portion of their final year was spent focusing on an unlikely place—rural Haiti. 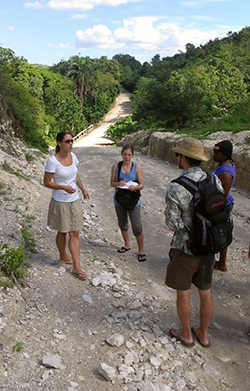 The student team took on the task of attempting to a fix an inefficient water system in rural Haiti as part of the two-term senior course, ENGS 89/90: Engineering Design Methodology and Project Implementation.

With support from Thayer School of Engineering, The Dartmouth Center for Health Care Delivery Science (TDC), and the Dartmouth Class of 1980, Cholnoky, Dahms, and Saunders spent two weeks of the extended winter break in Fond des Blancs, Haiti, a rural town on Haiti’s southern peninsula. There they studied various aspects of the unreliable water distribution system that serves as the main municipal water source for roughly 4,000 people in the community.

The engineering problem was presented in an engineering class at the beginning of fall term as a potential project, which Cholnoky, Dahms, Moss, and Saunders ultimately chose to take on in the hope that it would lead to sustainable improvements in water, sanitation, and the health of the community. Thayer Assistant Professor of Engineering Solomon Diamond served as the team’s faculty adviser for the project. Studio Art Senior Lecturer Jack Wilson and Associate Professor of Engineering Vicki May, both who have spent time working in Haiti in the last three years, also provided guidance during the project and accompanied three of the students to Fond des Blancs in December.

In collaboration with TDC, the faculty connected the students with one of Dartmouth’s partner organizations in Haiti, St. Boniface Haiti Foundation, based in Fond des Blancs, which had requested Dartmouth’s help in fixing the water system. Since the devastating 2010 earthquake in Haiti, Dartmouth faculty and students have been engaged in initiatives and projects in Haiti that encourage interdisciplinary, collaborative solutions to the challenges of health care delivery, education, and community development in Haiti.

Conor Shapiro, CEO & director of St. Boniface, explains the dire circumstances of the current situation. “Without a functioning water system in Fond des Blancs, people are forced to walk to a spring miles away at the source of the water system. Unfortunately, women and children usually bear the brunt of daily hikes to get water.”

This harsh reality is one of the reasons the student team was interested in the project.

“It was a combination of different things that drew me to the project,” Cholnoky says. “For one, it was the fact that it appeared to be a well-put together project, and while there were a lot of other good projects to choose from with interesting engineering challenges to solve, I wouldn’t feel as fulfilled spending two terms on them whereas this project is addressing a real-world problem.”

Dahms and Saunders, who were actively involved in the Dartmouth Humanitarian Engineering student group, agreed that the development aspect of the project was particularly appealing.

“The international component of the project made it stand out,” Saunders says. “It added a whole other dimension of complexity to the project. Generally, there is little opportunity to deal with the challenges you face when you have to integrate an engineering solution into a community.”

During the fall term, the team analyzed numerous photos and video clips of the pump, and consulted with employees at Hanover Water Works. The group also connected regularly with leaders at St. Boniface to better understand the pump system and its problems. The students’ goal was three-fold: address technical issues of the water pump, consider alternative energy sources to decrease the pump’s dependency on diesel fuel, and address inefficiencies of the larger water system to make the intervention sustainable.

After researching these problems in Hanover, the team decided it would be valuable to spend time on the ground in Fond des Blancs, as Dahms and Cholnoky both emphasize the need for accurate data, which had been challenging to gather remotely.

Wilson adds that the opportunity to live within a small, rural Haitian community for two weeks and to intensively research the possibilities for a real project during that time was unlike anything the students might have experienced in Hanover or during a more traditional foreign study program.

While in Fond des Blancs, the students saw firsthand how the gravity-fed water pump functioned. They walked the water line, collected real-time solar, wind, and hydropower data, and tested the system. They also met with the key individuals in charge of maintaining the water distribution system and talked with community members about how they collected water regularly and what challenges they faced in accessing water.

“It’s impossible to fully understand all the challenges without seeing it firsthand,” Saunders says. “I think it is also important to ensure good collaboration with the partner organization and to have as much personal interaction as possible. For us to meet with St. Boniface staff in-country and to work with them is very helpful for both parties.”

Molly Klarman, Assistant Education and Community Development Coordinator at St. Boniface, served as the liaison between the students and the community, during their time in Fond des Blancs. She says she was very impressed by the way they looked at the system in a holistic manner.

“Not only did they evaluate technical issues regarding the installation of an alternative energy source but they also collected information from users about their water consumption, observed workers fixing pipes, and talked extensively with those who run the day-to-day operations,” Klarman says.  “All of this information was invaluable to make an informed decision on the best way to update the aging water system.”

Since the students’ time in Haiti, they have completed the second term of the senior capstone course. The team’s final project involved developing recommendations for a cost-effective solar-powered water pump, preparing a comprehensive instruction manual, and putting together a preliminary grant proposal for St. Boniface to submit to funding agencies for the improved water pump system.

Most recently, one community development foundation has shown interest in the proposal and asked the group to prepare a more detailed application that could be funded.

The new system will now be able to deliver water much more reliably to the distribution lines. Additionally, the students’ solar-powered design will eliminate the high cost of diesel gas from the existing system, ensuring that the system is more cost-effective for the community.

Shapiro praises the fantastic job the students did conducting research, listening to the community, designing an appropriate system, and crafting a realistic proposal. He acknowledges that without their technical assistance, St. Boniface would not have had the expertise to come up with an appropriate design for the new system.

“It was inspiring to experience the enthusiasm and insight that they brought to the project and I was particularly impressed with the comprehensive view and the discipline with which they approached their work,” Wilson says. “The outcome is a great tribute to the broad-based engineering education that they have received at Dartmouth.”