Two Graduates to Work for Canada at Harlem Children’s Zone

For two Dartmouth seniors, Geoffrey Canada will be not only their Commencement speaker, but also their new boss. 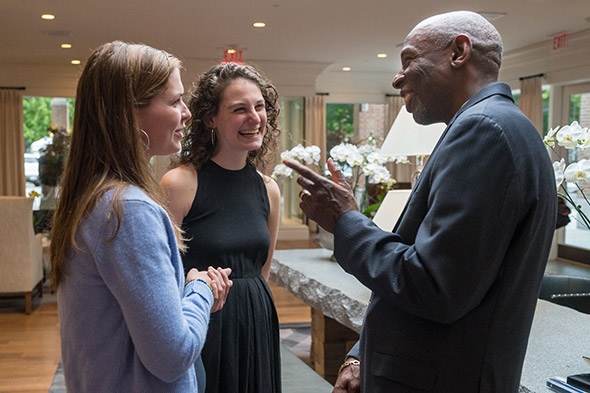 Kate Kranenburg ’13 (left) and Zoe Kopp ’13 talk with Geoffrey Canada at the Hanover Inn on the day before Commencement. (Photo by Eli Burakian ’00)

Zoe Kopp ’13 and Kate Kranenburg ’13 will work next year at Harlem Children’s Zone (HCZ), where Canada serves as president and chief executive officer.

“I think his speech will serve as a great bridge for us from Dartmouth to the real world,” says Kranenburg. “I heard him speak at Dartmouth a few years ago and he was a great speaker, really charismatic.”

Kopp and Kranenburg are looking forward to Canada’s speech, but are even more eager to start work with him.

“I really like the holistic perspective to youth development that they provide, from health to social services to education,” says Kranenburg, who majored in psychology.

Since 1990, Canada has led the organization that The New York Times Magazine called “one of the biggest social experiments of our time.”  Harlem Children’s Zone, Inc., is a nonprofit organization that provides educational opportunities to children from underprivileged areas in New York City’s Harlem neighborhood. The program supports students, and their families, from early childhood all the way through high school. Kopp and Kranenburg will be working as part of HCZ’s Healthy Living Initiative, which fights obesity and promotes wellness.

Kopp says that Dartmouth gave her the chance to pursue her interests, which include researching the factors that contribute to obesity. For example, while traveling on a Foreign Study Program in southern Africa, Kopp studied a possible connection between obesity and asthma.

“You really have to assess the environments people are in,” says Kopp, who is from New York City.

As they begin work for HCZ, Kopp and Kranenburg say they will draw on the skills they learned at Dartmouth.

“Dartmouth has allowed me to understand and combine my interests, which include obesity and the environment,” says Kopp, who majored in environmental studies.  “Classes I’ve taken at Dartmouth have been quite eye opening.”

“Dartmouth has been an awesome place with so many resources,” says Kranenburg. “That Dartmouth and the Tucker Foundation are giving us this opportunity to work for HCZ is really, really amazing.”