VoxFest Joins a Bumper Crop of Summer Theater at the Hop

Vox Theater, a new network of Dartmouth theater alumni, brings together Dartmouth students, faculty, and alumni from all over the United States to produce the inaugural VoxFest, a 10-day long “laboratory” festival for the development of innovative new works by Dartmouth alumni.

The festival comprises six performances, from July 3 through July 6, including a new musical about the Oneida community and a play about spiritual growth through transcendentalism, yoga, and UFO encounters. All performances are free and open to the public. VoxFest is presented in collaboration with the Dartmouth Department of Theater. 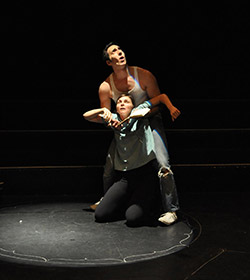 Vox Theater’s Hannah Chodos ’06 and Matthew Cohn ’08 star in By So Falling. Written and directed by Thom Pasculli ’05, the play explores themes of spiritual growth through Transcendentalism, yoga, and UFO encounters. (Photo courtesy of Vox Theater)

Participants will gather at Dartmouth starting Saturday, June 29, to workshop and then present these new projects in a series of readings and site-specific performances. More than 30 alumni will return to campus to team up with students and other artists to research, experiment, and explore these new works.

“The plays we’re producing in Hanover are ambitious, smart, and engaging. They explore politics, sexuality, health care, philosophy, war, psychology and the nature of community, and reflect Dartmouth’s dedication to the liberal arts and a real artistic inquiry,” says Kate Mulley ’05, Vox Theater president and co-founder, and a New York-based theater artist.

“We are delighted to continue this collaboration with Vox, a vital part of our ongoing effort to strengthen ties between theater students and our alumni,” says Professor Jamie Horton, the theater department’s director of theater. “VoxFest will be a wonderful kickoff for this summer dedicated to new work.”

Vox Theater was founded in 2012 by Mulley, Thom Pasculli ’05 and Matthew Cohn ’08 as an ensemble dedicated to making new work and facilitating exchange among Dartmouth artists. The company has partnered with the Dartmouth Department of Theater four times in the past year to host week-long intensive retreats for alumni artists. In August 2012, Vox produced Mulley’s The Reluctant Lesbian at the Cherry Lane Studio Theater as part of the New York International Fringe Festival.

VoxFest is the newest addition to a summer theater line-up at Dartmouth that has long emphasized new work. From Friday, July 26, through Sunday, July 28, the theater department puts on the  2013 Eleanor Frost & Ruth and Loring Dodd Play Festival, which each summer presents three prize-winning new plays by Dartmouth undergraduate playwrights. On Saturday, August 3, 10, and 17, the Hop presents six works-in-progress by the New York Theatre Workshop, in its 22nd Dartmouth summer residency.

For more information on the works being presented visit www.voxtheater.org/voxfest.
Written by
Office of Communications
Share this
FacebookTwitterEmail
In the News