Many fire companies will display tributes in Fourth of July parades this year to the 19 young men killed June 30, 2013, in Arizona fighting the Yarnell Hill wildfire.

Firefighters, very much a part of our civic celebration of independence, are ever mindful of the sacrifice of their own. And in the elite corps of Smoke Jumpers and Hotshots, the blowup that consumed 19 lives in Arizona recalls the 1949 Mann Gulch fire in Montana, when fire turned and took 13 men. The victims were just kids, really, as the mourners in Montana and now Arizona have said. 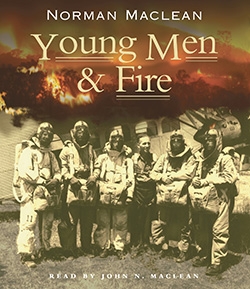 Norman Maclean ’24 told the story of the Mann Gulch fire in Young Men and Fire, a work of elegy and obsession by a survivor, says Professor Donald E. Pease, the chair of the Master of Arts in Liberal Studies program at Dartmouth.

Toward the end of his life, Norman Maclean ’24 turned to tell the story of the Mann Gulch fire in Young Men and Fire, a work of elegy and obsession by a survivor, says Professor Donald E. Pease, the chair of the Master of Arts in Liberal Studies program.

Maclean spent the summers before he came East to Dartmouth fighting fires with the U.S. Forest Service. He called it “one of the great outfits that he’d been privileged to be associated with in his life,” Pease says, along with Dartmouth and the University of Chicago. Found among Maclean’s papers after his death was an essay, “Black Ghost,” that recounts his own moments on the edge of death by wildfire. The writing became the prologue to Young Men and Fire.

In the book, Maclean writes: “first, considerably ahead of the fire, you reach the verge of death in your boots and your legs; next, as you fail, you sink back in the region of strange gases and red and blue darts where there is no oxygen and here you die in your lungs; then you sink in prayer into the main fire that consumes.”

When Maclean retired from teaching Romantic poetry and Shakespeare at the University of Chicago in 1973, “he decided he could invest his gifts as an interpreter of Romantic poetry by taking figures in his life who needed to be memorialized, and wrap those figures in the honor and dignity that his knowledge of the great Romantics would enable him to do,“ says Pease, who received his doctorate from the University of Chicago and who was in attendance at Maclean’s final lecture.

Maclean was a survivor, Pease says. He survived his brother Paul, whose art as a fly fisherman he memorialized in A River Runs Through It. In Young Men and Fire, he resolved to ”render each of those boys’ lives memorable, and thereby remove them from the condition of being impossible to grieve—how do you grieve for a group? He needed to produce a sense of the value for each of those boys’ lives.“

Over more than 10 years, until his death in 1990, Maclean struggled to find the stories of that loss and to write it down.  ”It’s the work of a survivor who justifies his longevity by producing ways of remembering those whose lives were cut off when they were young,“ Pease says.

In Young Men and Fire, Maclean explains the mission of rendering meaning from loss:

”Even so, there may somewhere be an ending to this story, although it might take a storyteller’s faith to proceed on a quest to find it and on the way to retain the belief that it might both be true and fit together dramatically. A story that honors the dead realistically partly atones for their sufferings, and so instead of leaving us in moral bewilderment, adds dimensions to our acuteness in watching the universe’s four elements at work—sky, earth, fire, and young men."