Two years ago, as she worked in low-income schools in Hyderabad, India, Averil Spencer ’10 began to understand that most of her bright-eyed, elementary-school-aged girls—with dreams to become doctors or computer engineers—would not reach the 10th grade. Some couldn’t afford it; many would be forced to marry. But for nearly all of them, Spencer says, opportunities had nothing to do with drive or ability. 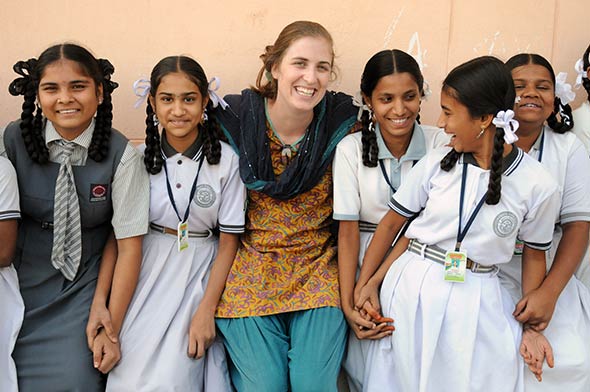 “There was overall limited expectations for these girls, in addition to a lack of exposure to information, including women’s health issues,” says Spencer, who was in India as a fellow with a social enterprise organization called IDEX. “It’s heartbreaking.” Spencer told the story of one girl experiencing her first period who locked herself in a room, thinking she was dying of cancer, because no one told her any differently.

Rather than simply accept the status quo, Spencer chose to do something about it. In May of 2011 she held a camp, VOICE 4 Girls, for a few hundred students. She enlisted local college-aged counselors and educators from the schools to teach the girls three key things: English speaking, leadership, and critical information regarding health and safety. It didn’t take long for the innovative camp to catch the attention of parents, teachers, and organizations such as the Nike Foundation’s Girl Effect, which lent its financial support.

Today, just two years later, the camp remains devoted to those core educational values but is now supporting 2,000 participants a year, 250 local counselors and lead teachers, and 10 full-time employees, including Spencer, the chief executive. In a recent article about the camp, “Giving Them Wings to Soar Higher,” in India’s newspaper The Hindu, Spencer said her hope for the girls is that they “go back to their schools, hostels, and homes and be harbingers of change.”