James Tengatenga, diocesan bishop of Southern Malawi and chair of the Worldwide Anglican Communion’s Anglican Consultative Council, has been appointed the Virginia Rice Kelsey ’61s Dean of the Tucker Foundation. 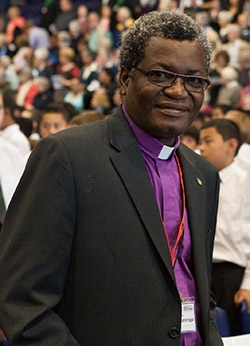 James Tengatenga was ordained an Anglican minister in Malawi in 1985, when he began his career as a parish minister and diocesan youth worker. (Photo courtesy of Anglican Communion Office)

Tengatenga brings a wealth of experience as a mentor, educator, and spiritual leader to his new role running the center, which supports the spiritual and moral work at the College.

“James Tengatenga is a person of international stature and extraordinary perspective,” says Interim Provost Martin Wybourne. “His accomplishments and leadership make him an outstanding choice to lead the Tucker Foundation.”

Tengatenga was ordained an Anglican minister in 1985 in Malawi and began his career as a parish minister and diocesan youth worker. Since then he has continued to focus on mentorship, training in England as a youth and community worker, and serving as a mediator.

In the role he has held since 1998, Tengatenga, as part of a civil society organization team in Malawi, has negotiated with the government on matters of governance, human rights, and the economy.

“I am very excited to join the Dartmouth community of talented students, faculty, and staff,” says Tengatenga.

A native of Zimbabwe, Tengatenga earned a diploma in theology from Zomba Theological College in Malawi and a master of divinity at Seminary of the Southwest in Texas. He has done post-graduate work at the University of Birmingham in England and obtained a PhD at the University of Malawi in 2002.

“The Search Committee found in James the personification of the spirit and mission of the Tucker Foundation,” says committee Chair Irene Kacandes, The Dartmouth Professor of German and Comparative Literature. “We are confident his wisdom, experience, and commitment to service will strengthen the Tucker Foundation’s support of our diverse community.”

Tengatenga joined the faculty of Zomba Theological College in Malawi in 1993 and the University of Malawi in 1997, lecturing in theology, pastoral counseling, and other aspects of religious studies. He continues to teach in Malawi and has been a visiting scholar in the United Kingdom and the United States, where he taught courses at the General Seminary in New York and the Seminary of the Southwest in Texas. He has also served on the boards of governors of three academic institutions.

“Tucker is one of Dartmouth’s treasures, and attracts students to our campus every year,” says Dean of Admissions and Financial Aid Maria Laskaris, a member of the search committee. “As we seek to instill in our students a commitment to service and meaningful contribution, James will be a great leader of a great Dartmouth institution devoted to doing just that.”

Tengatenga has been deeply involved in HIV ministry as a member of the Malawi National AIDS Commission, which coordinates the national response to the disease. He has also authored books and manuals aimed at increasing the national dialogue about AIDS and reducing the spread of the virus.

Tengatenga, will report to Interim Vice Provost Lindsay Whaley. He succeeds Richard Crocker, who has served Dartmouth for 10 years, first as college chaplain and then as dean of the Tucker Foundation. Crocker will remain in this position through the end of August, at which point Randall Balmer, the Mandel Family Professor for the Arts & Sciences and chair of the Religion Department, will serve as interim dean until Tengatenga’s anticipated arrival in Hanover in the spring of 2014.

Balmer, a member of the search committee and also an Episcopal priest, says, “Since I arrived at Dartmouth, I’ve been impressed by the unique value of the Tucker Foundation. In addition to its service outreach, it is a place for widely different groups from around our community to engage the central issues facing society. James brings to Dartmouth knowledge of the world, extensive administrative skills, and moral authority. He is a superb choice.”

Founded in 1951, the William Jewett Tucker Foundation educates Dartmouth students for lives of purpose and ethical leadership, rooted in service, spirituality, and social justice. The foundation provides opportunities for community service, exploration and expression of faith, and leadership and reflection, as well as off-campus fellowships and internships, cross-cultural programs, and special speakers.