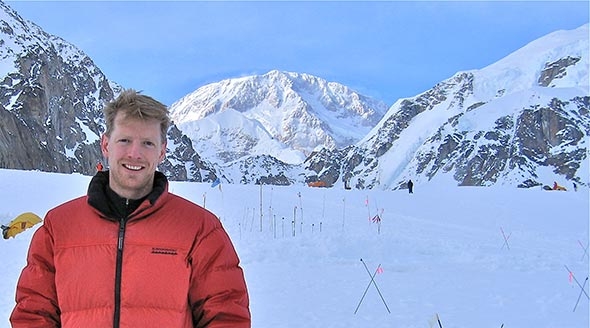 “This project is part of a new push in our field to narrow the focus down on our understanding of climate change,” says Erich Osterberg. (Photo by Seth Campbell)

“We drilled two 700-foot, 4-inch-wide holes to bedrock through the glacier on Mount Hunter, the third highest peak in the Alaska Range and Denali’s closest neighbor,” says Osterberg, an assistant professor in Dartmouth’s Department of Earth Sciences.  An unusual lack of storms allowed the team to complete the ice core drilling and an array of supporting field research quickly and efficiently. “Alaska’s exceptionally warm summer this year also drew attention to the shifting climate picture,” he adds.

While the changing climate contributed to the field season’s success in Alaska, in other venues the climate interfered. Osterberg cites research he conducted with Dartmouth’s Professor Meredith Kelly in Thule, Greenland. “The Thule research team now has to carry rifles and hire guards for polar bear protection,” Osterberg says. “As the sea ice hunting grounds melt faster and further each summer, it forces hungry bears to travel inland in search of food. Polar bear sightings were rare in Thule until just a few years ago.”

Last year the strongest summertime Arctic storm since 1979 ravaged the researchers’ camp at the edge of the Greenland Ice Sheet with hurricane-force winds, destroying most of their tents. Research suggests that decreasing sea ice from warmer temperatures is contributing to the stronger storms. The same region of Greenland is now inundated with mosquitoes each summer, when only a decade ago colder summer temperatures kept the mosquitoes in check.

In the Alaska project, the weather was far more cooperative. With a $1.1 million grant from the National Science Foundation (NSF), Osterberg collaborated with Professor Cameron Wake of the University of New Hampshire (UNH) and Professor Karl Kreutz and Professor Sean Birkel of the University of Maine (UMaine) on the project. Also participating were the National Park Service, the U.S. Ice Drilling Program Office, and students from Dartmouth, UNH, and UMaine.

The field season started at the beginning of May with Kreutz, Wake and their crew flying to the glacier via ski plane. Osterberg and his student arrived in short order. The team first climbed 14,000 feet up Denali to acclimatize to the altitude. Equipment and supplies were then helicoptered in to the drill site and drilling began. In response to a request from the National Park Service, all of the power for the drilling was supplied by renewable power—in this case, a combination of solar and wind.

“This project is part of a new push in our field to narrow the focus down on our understanding of climate change,” Osterberg says. He says large scale projections such as those released by the Intergovernmental Panel on Climate Change (IPCC) are not finely focused enough to account for changes in specific regions such as central Alaska, which has been warming dramatically in recent decades. “To understand how fast the glaciers in the Alaska Range are going to melt in the future, we need to understand how much the glaciers responded to past changes in temperature and snowfall specifically in central Alaska. These ice cores will provide our first annual record snowfall in this region.”

Like tree rings, the cores can provide data from their annual layers. Studies of the ice cores will concentrate on the chemistry of the ice—how much dust is in it, how much sea salt is in it—and determine the relative amounts of chemical elements. “If we can assess temperature, snowfall, and storminess, we can get a really good understanding of how the climate of central Alaska has varied in the past,” Osterberg says.

In mid-June, all the ice cores, drilling personnel, and equipment were flown from Mount Hunter via helicopter and ski plane and the cores were then packed in freezer trucks and driven to the National Ice Core Laboratory in Denver, Colo., where they are in frozen storage. “We will go there in October to cut the cores into slabs that will then get shipped to Dartmouth for sampling, using our ice core melting system,” says Osterberg. Samples will be analyzed at Dartmouth, UNH and UMaine.

This summer was the culmination of six years of work to find the best spot to collect the longest record of climate possible from this area, going from glacier to glacier throughout the park with ice-penetrating radar. The radar data collection was led by UMaine PhD student Seth Campbell in collaboration with Steve Arcone at the U.S. Army Cold Regions Research and Engineering Laboratory in Hanover, N.H. The team also had maintained weather stations in the area for the last five years, with the goal of relating the weather in the mountains to the snow chemistry.

Studies that focus on the movement of the glacier over time will be conducted in collaboration with UNH Professor Joseph Licciardi. “What is neat about this project is that we are using ice core data and combining it with this very different sort of data to get a complete picture of not just how the climate in central Alaska changed in the past, but how the glaciers responded,” Osterberg says.

The collaborative project has also been marked by student participation. “This year we had two Dartmouth students, Dominic Winski ’09, an incoming PhD student, and Samuel Streeter ’13, who expects to graduate with an AB in the fall,” Osterberg says. Streeter received funding to participate in the Denali expedition from a Dean of Faculty undergraduate research grant and through a Stefansson Fellowship from the John Sloan Dickey Center for International Understanding at Dartmouth. Graduate students Seth Campbell and Tim Godaire from UMaine, and Elizabeth Burakowski from UNH were also key participants in the field research. Over the past few years, graduate students Seth Campbell and Dom Winski have been lead authors on four publications on this research, with two more under review.

The NSF-funded effort has a long time line, with at least two years ahead in the laboratory. “We have to melt 682 feet of core twice and sample it, with thousands of samples going to the mass spectrometers, ion chromatographs and all these other instruments that we use here at Dartmouth and at UMaine and UNH. And that’s just to get the data,” says Osterberg. “Then we have to interpret the data using statistical analyses, compare it to other records, and incorporate all this into our glacier and climate models.”

Winski will be working in the lab, melting the core and conducting a lot of the analyses along with Osterberg, lab technician David Ferris, and undergraduate Sarah Caughey ’15, who presented research at the 2013 Wetterhahn Symposium. Osterberg notes that almost every year since 2008, a Dartmouth undergraduate has gone to Denali as part of the expedition.