Nearly 500 staff members were honored at the annual Service Awards Banquet on June 18 for their combined service of more than 10,000 years to Dartmouth.

Hosted by the Office of Human Resources, the event recognized staff members who have worked at the College from 10 to more than 45 consecutive years. The festivities included a reception, dinner, and ceremony at Leverone Field House. 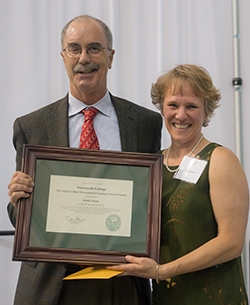 The highlight of the night was the presentation of the 2013 Sheila Culbert Distinguished Employee Award to Keely Ayres, who has worked at Dartmouth for more than 12 years. Ayres is the senior production manager of the Hopkins Center for the Arts.

“In a year when many staff went beyond the call of duty to make the Hopkins Center’s 50th anniversary and the Year of the Arts such resounding successes,” said President Phil Hanlon, “Keely Ayres still distinguished herself in her extraordinary contributions to these efforts.”

“Part of what makes Keely such an exemplary employee is her 100 percent commitment to the work at hand, at Dartmouth and beyond,” said Rahmann. “Everyone involved in an event she oversees benefits from her wise, sensitive guidance and seemingly endless energy.”

Established in 2008, the Culbert Award recognizes a Dartmouth staff member for exemplary work performance, unwavering commitment to Dartmouth, and relentless pursuit of excellence. Nominations for the award are submitted by Dartmouth colleagues. Culbert was an employee who served Dartmouth from 1989 to 2008 in several roles, including as an adviser to former President James Wright. Culbert is now Head of School for the Loomis Chaffee School in Windsor, Conn. 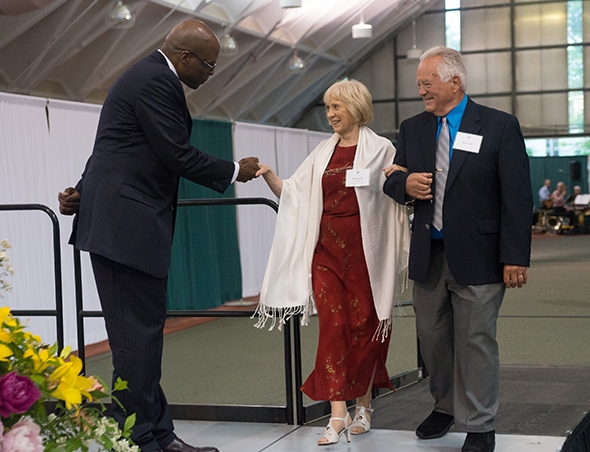 Myron S. McCoo, vice president of the Office of Human Resources, congratulates Ellie Smith, who is accompanied by her husband, Wil Smith, at the awards banquet. Ellie Smith has worked for Dartmouth for 46 years. (Photo by Eli Burakian ’00)

Also honored was Ellie Smith, assistant to the vice president in the Office of Alumni Relations, who is Dartmouth’s longest-serving employee. Smith has worked at the College for 46 years.

Myron McCoo, vice president of human resources, read remarks about Smith from Martha Beattie ’76, vice president for alumni relations, who was unable to attend the event.

“Ellie knows just about everything there is to know about the activities in Blunt,” McCoo said. (The Office of Alumni Relations is in Blunt.) “Her relationships with alumni over the years have been warm and helpful. It’s been a genuine pleasure to start each day with ‘Good morning, Ellie.’ ”

Hanlon thanked the hundreds of employees present for their work preparing college students to become leaders.

“I can clearly see what makes Dartmouth so transformational—the people who work here,“ he said. “You’ve set a high standard for the way Dartmouth is run and maintained, and for the way our students are engaged, supported, and inspired. The work that you do toward this end is critically important to Dartmouth and to it’s mission, and I am truly honored to join all of you in being part of that work.”

Following the Culbert Award presentation, each honoree walked across the stage, shook hands with Hanlon, was presented with a gift and certificate, then posed for a photograph.