In 2004, almost a year into his PhD program in Public Affairs at Indiana University, Dartmouth Professor Michael Cox had a problem.

“I knew something needed to change,” he says. His interests were diverging from the program’s standard curriculum. 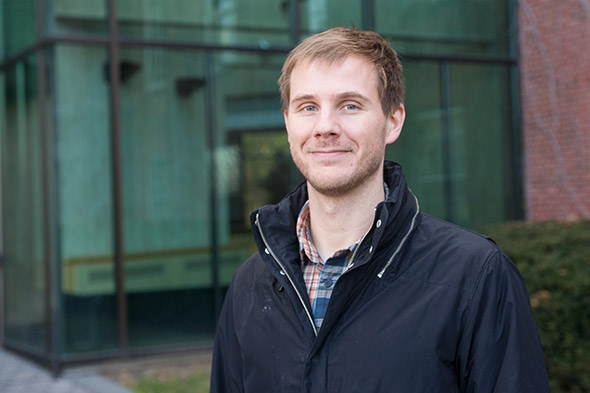 “Ultimately, with policy, what you are trying to do is to change human behavior,” says Professor Michael Cox. “In order to do that, you have to understand people’s incentives and the information they have available.” (Photo by: Eli Burakian ’00)

Soon thereafter, he enrolled in a course taught by the innovative political scientist Elinor Ostrom. The class served as the start of an eight-year relationship, as Cox became her student and later her postdoctoral fellow.

Ostrom, who died last year, was the first woman to win the Nobel Prize in Economic Sciences, doing so in 2009. Cox, an assistant professor of environmental studies, recently received an award of his own: an inaugural Elinor Ostrom Award on Collective Governance of the Commons. Commons is term that describes the use of  natural resources by many individuals.

“The environmental studies program is delighted to have Michael Cox’s scholarship recognized with this prestigious honor,” says Anne Kapuscinski, the Sherman Fairchild Distinguished Professor of Sustainability Science and chair of the environmental studies program. “We know Michael will carry on the distinguished legacy of his mentor, Elinor Ostrom.”

“I’m honored,” says Cox, leaning back in his chair as sunlight beams through the large windows in his office in Fairchild. “The award means a lot to me.”

“It’s still strange to think of the world without Lin,” he says.

Cox, though, works to keep Ostrom’s legacy alive in both his research and his classrooms.

Ostrom was known for her studies on how people manage common resources such as fisheries, water, and forests. She put a heavy emphasis on fieldwork, traveling long distances to interview fishermen or lobstermen, for example. Ostrom’s research often looked at how groups regulate their own resources when governments do not intervene. According to The New York Times, her work “overturned the conventional wisdom about the need for government regulation of public resources.”

Ostrom’s commitment to fieldwork during a time when her type of research was done mostly by anthropologists illustrates the kind of pioneer she was, says Cox.

“I think the values that Lin embodies are that you have to take circumstances and context seriously,” says Cox. “Researchers shouldn’t just devise blueprints and prescriptions for what is best for others without visiting a place and talking with people. It takes a nuanced approach.”

Cox has employed that nuanced approach on trips to Colorado, New Mexico, Kenya, and Peru, where he studies the water management of irrigation systems. Like his mentor, Cox spends much of his field research talking to people—in his case, farmers.

“One thing I want to see is: How well can these farmers respond to droughts?” he says. “I want to know how farmers in different places self-organize to manage water, and how the management is affected by markets and public policy.”

In order for policy to succeed, Cox says, researchers have to look beyond their offices.  That is why it is crucial to reach out and talk to people, he says.

“Ultimately, with policy, what you are trying to do is to change human behavior. In order to do that, you have to understand people’s incentives and the information they have available.”

‘His Door Is Always Open’

One way Cox has tried to carry on Ostrom’s teaching style is through a deep investment in his students. Cox has a quick smile and an easy-going demeanor, and his blue eyes light up when he talks about his students.

“You have this great privilege of working with talented young people who have lots of ideas, and you get to help them navigate their ideas and try to assist their research,” says Cox. “I’ve really enjoyed working with Dartmouth students. They are just a really wonderful bunch of young people.”

Lisa Rennels ’14 has taken two of Cox’s classes, and says he has been an invaluable resource.

“When Professor Cox realized my personal interest in conservation easements and water policy, he was quick to connect me with a local land trust and not only give me their contact information, but also set up a meeting for me,” says the environmental studies major.

“He is keenly interested in students’ work and experiences outside the classroom,” says Rennels. “I know his door is always open for discussion about my academic plans and career interests.”

Emily Blackmer ’13 is grateful she had the opportunity to work as Cox’s research assistant. She also audited one of his courses.

“In the classroom, he is dynamic and engaging,” says Blackmer, an anthropology major. “He’s exactly the kind of professor that Dartmouth prides itself on.”

In 2009, as Cox was preparing to defend his dissertation, Ostrom was the surprise winner of the Nobel Prize in Economic Sciences. It was a surprise, after all, because Ostrom was trained as a political scientist, not as an economist.

“Things basically went crazy,” Cox says. “The phones rang off the hooks for months and months.”

With Ostrom suddenly famous, she had numerous requests for interviews and speaking engagements. But due to her advanced age—she was in her mid-70s at the time—and busy schedule, she couldn’t commit to all of the requests. Instead she asked Cox, then her postdoctoral fellow, to speak at some of the presentations and conferences, in places as far away as Bolivia and Norway.

“How can you turn that down?” Cox says with a smile.

Despite the obvious benefits, Cox observed that the newfound attention likely brought new challenges as well.

“Lin handled it really well,” says Cox. “But I wonder if she struggled with this idea that somehow she had a solution to every problem, now that she was the Nobel Prize winner. She would walk into a room and everyone wanted to hear her solution.

“But she always preached that we need to work together to consider a diversity of solutions for each problem.”

He recently founded a collaborative project called the Social-Ecological Systems Meta-Analysis Database, or SESMAD. While it sounds complicated, the mission of SESMAD is actually fairly simple: to connect scholars and create a database of their research on large-scale environmental governance.  This project was inspired by similarly synthetic work that Ostrom conducted on small-scale systems.

Twice a year, SESMAD has brought together a group of 15 scholars from institutions across the world. Last year the scholars gathered at Dartmouth and at Arizona State University. Cox hopes the scholars will be able to develop strategies to deal with a variety of environmental challenges.

“We are sort of following in Lin’s footsteps,” says Cox. “I think collaboration is where science needs to go.”