Four First-Year Fellows with Dartmouth’s Nelson A. Rockefeller Center for Public Policy and the Social Sciences earned prime seats for a landmark moment for the nation after camping out all night on the sidewalk outside the U.S. Supreme Court in Washington, D.C. 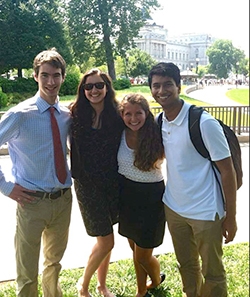 Moved by the chance to witness history, Theodore Owens ’16, Susanna Kalaris ’16, Maureen Mentrek ’16, and Karna Adam ’16 braved thunderstorms, improvised meals, and chatted with Washington politicians and throngs of others from all perspectives as they waited for tickets to enter the Supreme Court, where the justices on June 26 struck down the Defense of Marriage Act (DOMA), opening the way for same-sex couples to receive marriage benefits.

Adam, an economics and computer science double major interning at the National Science Foundation, describes on the Rockefeller Center blog finally getting his “golden ticket.”

“With it, I gained access, not to Willy Wonka’s chocolate factory, but to the Supreme Court of the United States, where I heard the justices pronounce, explain, and dissent some of the most important human rights rulings since the Civil Rights era.” 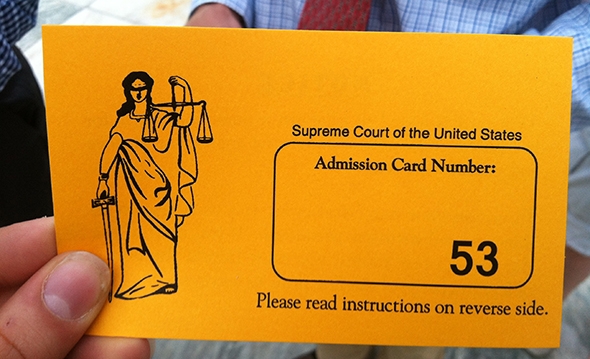 The scene outside the court was almost as exhilarating as the scene inside, all four Dartmouth students say.

“My most vivid impression of my time spent at SCOTUS was actually before the hearings even began,” says Kalaris, a government major and French minor who is working at the Center for Environment and Peace at Conservation International. “I had long conversations with Marines, Mormons, college freshmen, and lobbyists, and despite our differing ages and political leanings, we all knew we were there to bear witness to history. Sleeping in the shadows of the most hallowed buildings in our nation impressed the magnitude of the day ahead upon us.”

Mentrek, a prospective government and history double major who is working at the Center for Perinatal Advocacy at Providence Hospital in Washington, recounts running into Sen. Paul Ryan walking down the street, ordering a pizza for delivery outside the Supreme Court building, and “making friends with an eclectic group as we camped outside together.”

But what went on in the court was profound, she says.

“Listening to Kennedy, Roberts, and Scalia grapple with and explain some of the most contentious issues of our time was awe inspiring, and for me no moment will ever rival the ripple that went through the courtroom as hands flew to cover mouths that hung agape as each person realized that Justice Kennedy had just deemed DOMA unconstitutional,” Mentrek says.

Owens, a double major in economics and computer science who is working at Conservation International, says the fellowship offers an incredible opportunity to live and work in Washington, to learn about public policy from the inside, to network with Dartmouth alumni in the field, and to be able to witness important events like the ruling of the U.S. Supreme Court.

The First-Year Fellows Program pairs about two dozen Dartmouth students who have excelled at the Rockefeller Center’s introductory public policy course and completed its intensive Civic Skills Training with Dartmouth alumni mentors in the public and non-profit sectors in the summer after their first years.

“The opportunity to immerse themselves in public policy is why the Rockefeller Center runs the First-Year Fellows Program in Washington, D.C.,” says Rockefeller Center Deputy Director Sadhana Hall, who oversees the program jointly with Professor Ron Shaiko, a senior fellow and the associate director for curricular and research programs.