In the Office of Alumni Relations current installment of “Good Reads,” 13 Dartmouth faculty members share their summer book recommendations. The faculty picks include A Farewell to Arms, suggested by Chair of the Department of French and Italian Graziella Parati, as the department anticipates the 100th anniversary of the start of World War I; Pineapple Culture, a story of migration and globalization recommended by Richard Kremer, an associate professor of history; and the Orvil E. Dryfoos Professor of Geography and Public Affairs Richard A. Wright’s choice of Netherland, a look at the lives of “a cricket-playing, street-wise immigrant dreamer” and a “Dutch-born apolitical equities analyst.” 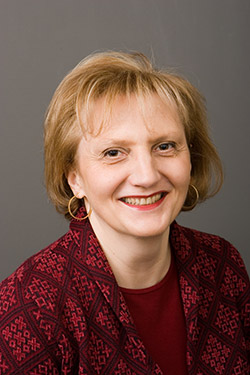 Graziella Parati, the chair of the department of French and Italian, says, “If you are only interested in one seminal book about Word War I, I would recommend a masterpiece: Erich Maria Remarque’s “All Quiet on the Western Front.” (Photo by Joseph Mehling ’69)

Below, Parati, the Paul D. Paganucci Professor of Italian Language and Literature, shares her thoughts on three books: The Swerve: How the World Became Modern by Stephen Greenblatt; A Farewell to Arms by Ernest Hemingway; and All Quiet on the Western Front by Erich Maria Remarque.

“If the idea that the humanities don’t change the world has ever crossed your mind, you must read The Swerve, published in 2011. It is a very legible book that won the National Book Award. It is the story of a poetry and philosophy manuscript that Poggio Bracciolini rediscovered, changing the course of western culture.

In one year we will be remembering at Dartmouth the beginning of WWI with a conference organized by the Department of French and Italian. It is time, therefore, to re-read the novels that conflict has engendered.

Ernest Hemingway’s A Farewell to Arms, published in 1929, is one of those books. Against the backdrop of the war, the novel narrates the love story between the American Frederic Henry, who is serving as a lieutenant in the ambulance corps of the Italian Army, and the English (at times she is defined as Scottish) Catherine Barkley.

If you are interested in only one seminal book about WWI, I would recommend a masterpiece: Erich Maria Remarque’s All Quiet on the Western Front, published, as was Hemingway’s book, in 1929. The book narrates the hardships and mental stress (shell shock) that soldiers experienced during the conflict. It demystified heroic notions about that conflict, violence, and killing and became one of the books banned by the Nazis.”