Jodie Mack: Searching for Questions Rather Than Answers

Jodie Mack is a whirlwind. She blew into a Hanover restaurant for an interview about her research and recent exhibit at the Hopkins Center, “No Kill Shelter,” with a burst of energy. Mack is an assistant professor of film and media studies, teaching animation theory and history. The show was part of her research, which asks the question: Is it possible to make a figurative or subjective abstract film? 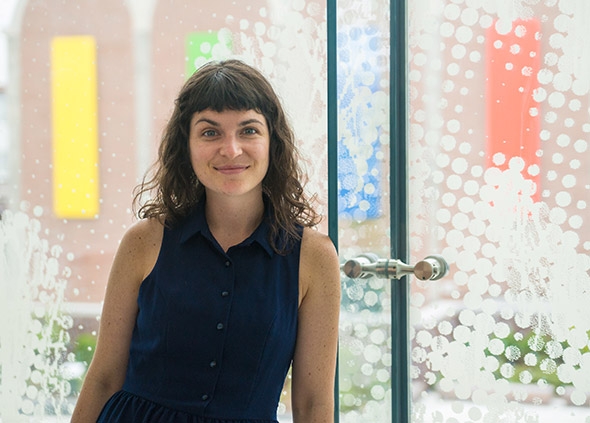 “The question that interests me is how abstract animation can inform and add meaning to a film,” says Jodie Mack. (Photo by Eli Burakian ’00)

“I’ve spent 10 years on these specific inquiries,” she says. “This exhibit was geared towards my ongoing questions related to the role of abstraction in contemporary society and the definition of experimental animation.”

Mack began making 16 mm experimental abstract films while still a student. Because she could not afford a camera, she made some of her films by creating images directly on the film. She has made a number of films (from 30 seconds to five minutes long) in this manner—sometimes scratching images onto the celluloid, sometimes pasting bits of discarded materials to create an image.

“My films are very strange,” Mack says. “I concentrate on the study of form and meaning in contemporary cinema. At the center of all my films are materials; they are all about stuff. It starts with objects. The question that interests me is how abstract animation can inform and add meaning to a film.”

Mack explains that most of us experience abstract animation in our day-to-day lives only in the form of screen savers, images that flash in the background and often go unnoticed; or in a commercial context, such as with fireworks, motion graphics on television or laser shows, used to sell a product rather than to be enjoyed as pure art.

In her recent show, Mack brought abstract animation to the forefront, literally. The artwork featured in the show consisted of a collection of old discarded screens, televisions, and computer monitors, wrapped in bright paper, flashing vivid abstract images on their respective screens.

“These items had all been thrown away,” she says. “I’m trying to get at how rapidly technology has become obsolete. As soon as you buy something, it’s obsolete.”

When asked about the significance of the wrapping paper, Mack says that she used wrapping paper because it’s a readily available material geared toward women, oftentimes made to be thrown away—a product produced for disposal.

“I’m not trying to convey one thing or the other,” she says. “I am personally interested in wrapping paper and scrapbook materials—things geared towards conventional women as a means of making art.

“It’s the fine line between art and craft that interests me; this is not a feminist critique. I’m calling attention to the notion of abstract art among the conventional nonartist.” 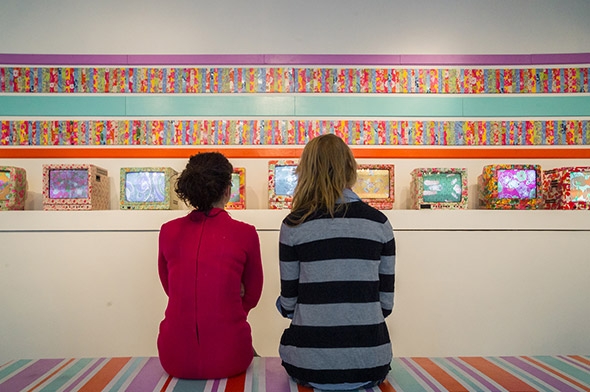 The show had nine television screens and eight computer monitors (five Macs, one Mac Mini, and two laptops), each with its own brilliant flower-patterned wrapping on the exterior, and abstract films running on a continuous loop, or cycle. Every cycle was unique, and varied in length from 30 seconds to 10 minutes, but they were not random. Mack relied on artistic intuition to find the rhythm of each cycle, and while the patterns repeated, there were variations within the cycles. The films shown on the televisions were made with algorhythmic transparency stop motion animation, the rest were made with computer animation.

While the work and exhibit were part of Mack’s research, she is not looking for a conclusion. It’s a continuum. The final result will not be answers, but more questions.

“The focus of my research is to encourage people to question abstraction’s role in society themselves, think about constantly obsolescing technology, the role of products made for disposal, and the role of experimental animation.” 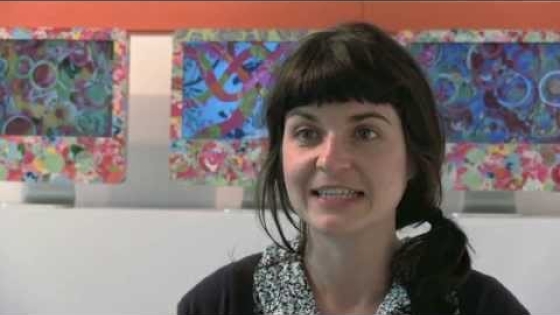