From Kuwait to Dartmouth: Students Learn About Cybersecurity

Fidgeting with his hands, Khaled Al-Qahtani took a deep breath as he gathered the words to describe his experience at Dartmouth this summer.

As a spring ’13 graduate of computer science at the American University of Kuwait (AUK), Al-Qahtani had a lot of experience in worldwide technology-related competitions. He’d participated in the Microsoft Imagine Cup 2012, in which he received first place in the software design competition and won Microsoft’s Mobile Development Award. 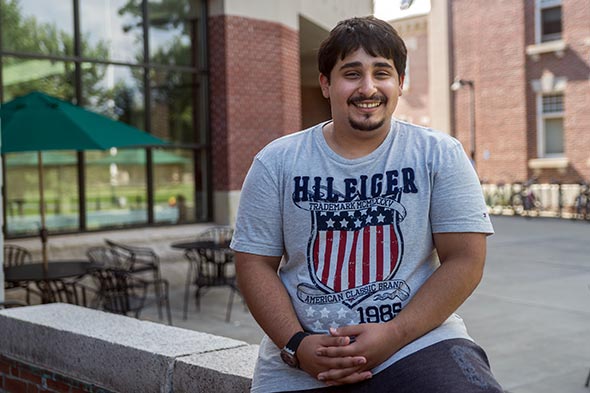 “SISMAT broadened my perspective and allowed me to understand how others have different methods of operating computer systems,” says Khaled Al-Qahtani. (Photo by Eli Burakian ’00)

The Secure Information Systems Mentoring and Training (SISMAT) program seemed like the perfect next step for him. SISMAT is run by Dartmouth’s Institute for Security, Technology, and Society (ISTS). This year’s program is the sixth SISMAT program, and the third in which students from AUK have been involved. There were 15 students in the program this year, from colleges and universities across the United States, India, and Kuwait. Because of the partnership between Dartmouth and AUK, the program is made available to AUK students by ISTS at no charge; they need only pay for their travel expenses. (Leaders from Dartmouth and AUK met earlier this year to reaffirm their partnership, which deepens and expands the liberal arts experience on both campuses, by signing a third memorandum of understanding between the institutions.)

Al-Qahtani applied, and eventually, he was on a plane to Boston, eager to plunge into the SISMAT program. “I remember when I was on the Dartmouth Coach—I didn’t know whether to feel nervous or excited,” he says. “I think it was a little bit of both because I really didn’t know what to expect.”

What he did know was that he was going to be part of a training program for cybersecurity tools. He would learn about cryptography, network security, and other topics that provide the necessary support for him to participate in future internships.

Having just left the desert landscape of Kuwait, Al-Qahtani noticed a big difference in environment when he arrived in Hanover. His first impression of Dartmouth’s campus was that it was “green—just very, very green.”

He immediately felt welcomed. “Everyone is so outgoing here at Dartmouth,” says Al-Qahtani. “They smile and even stop their cars when I want to cross the road. It made me wonder if people were plotting to run me over or were just being really nice.”

He describes the SISMAT program as “hard to get used to at first, but toward the end, you grasp the concepts that they’re trying to deliver.” He stresses that the program isn’t for students to absorb every piece of information given during the training and mentoring. Instead, it’s about “giving students the skills to point out flaws in cybersecurity.”

Michael Locasto, a SISMAT program instructor and an assistant professor in the Department of Computer Science at the University of Calgary, notes that “SISMAT is really intensive. Students have eight-hour days and so it’s a fire hose of information. Students kind of get a culture shock in security.”

Al-Qahtani says the SISMAT program is a great opportunity because “it teaches you how to hack into computers, which isn’t something that is taught at many academic institutions.” SISMAT instructors Locasto and Sergey Bratus developed the “hacker curriculum” to help students understand how a hacker would try to gain access to a computer system. With this knowledge, the students can then better understand how to secure systems.

Locasto says the aim of SISMAT isn’t to turn students involved into professional hackers or security experts. Instead, “the real benefit is opening their eyes to different areas of information security such as networking security, host security, privacy, and so on, just to give them an idea of how large the field is.”

Another benefit of SISMAT is the interaction with the other students, Al-Qahtani says. “SISMAT broadened my perspective and allowed me to understand how others have different methods of operating computer systems.”

“I learned a lot of stuff, like how to use a Linux operating system and how to use commands at terminals to do different things,” Al-Qahtani says. Most importantly, he says, he learned how to read information from a single network and got to see the way information flowed.

As Al-Qahtani immersed himself in the SISMAT program, he made new friends and was enjoying his stay. “One of the things I always did when I met up with a couple of friends was play billiards. Things were just going great.”

He was having a memorable time. However, there were times when Al-Qahtani felt out of place. Some social norms that he was accustomed to, such as smoking, weren’t widely accepted in Hanover.

“I guess you can say I was going through a bit of a culture shock,” Al-Qahtani says.

Despite that, Al-Qahtani says his time at Dartmouth College was extraordinary. “I’ve made great friends, gotten to know and respect a different culture, studied, and had a lot of fun. I’m glad I got the opportunity to be part of the SISMAT program and enjoy Dartmouth’s campus life.”

Stephanie Khalil is a student at the American University of Kuwait (AUK), majoring in communication and media. This summer, she worked in the Office of Public Affairs and the Hood Museum of Art as an intern with the Dartmouth College–AUK Program. 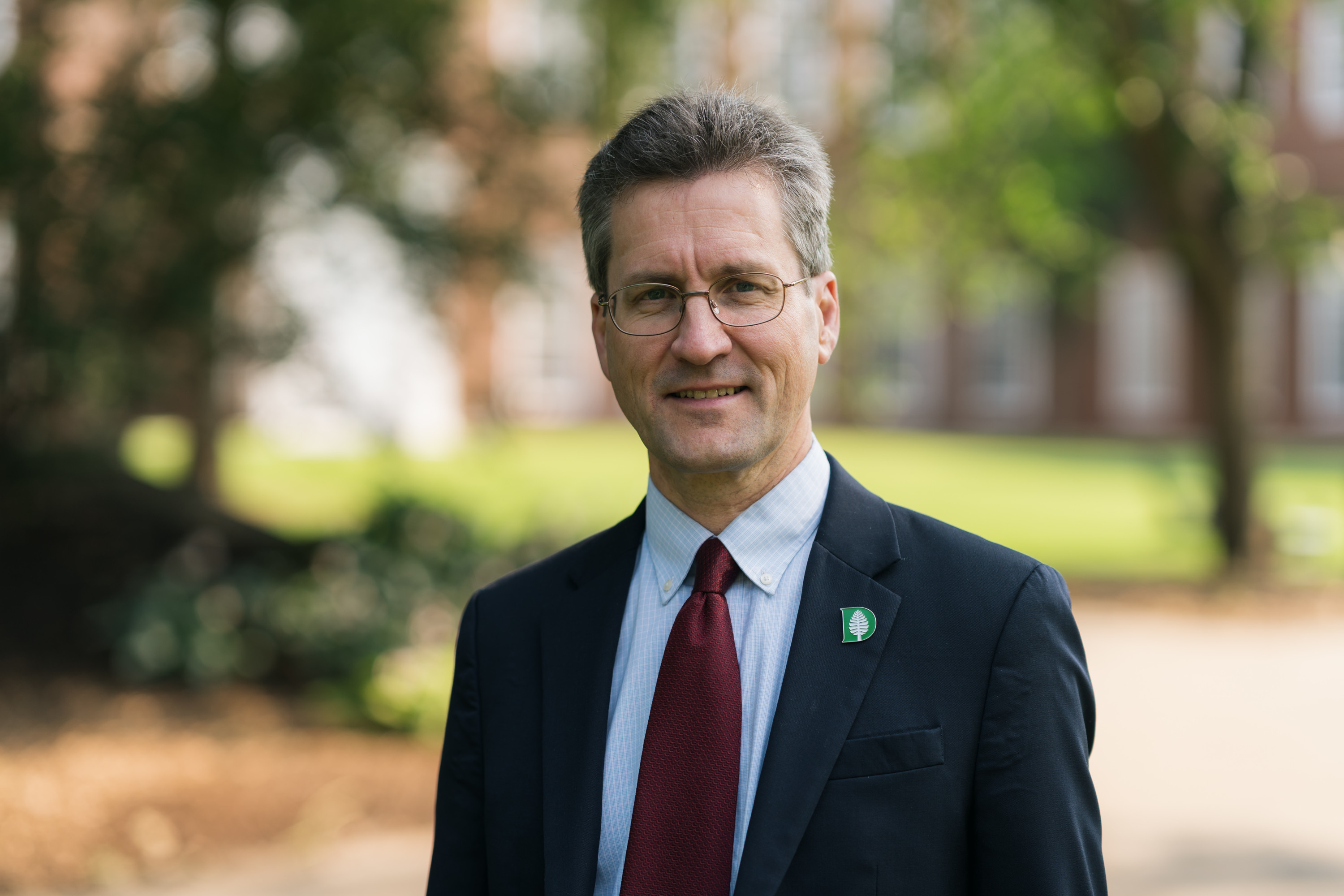 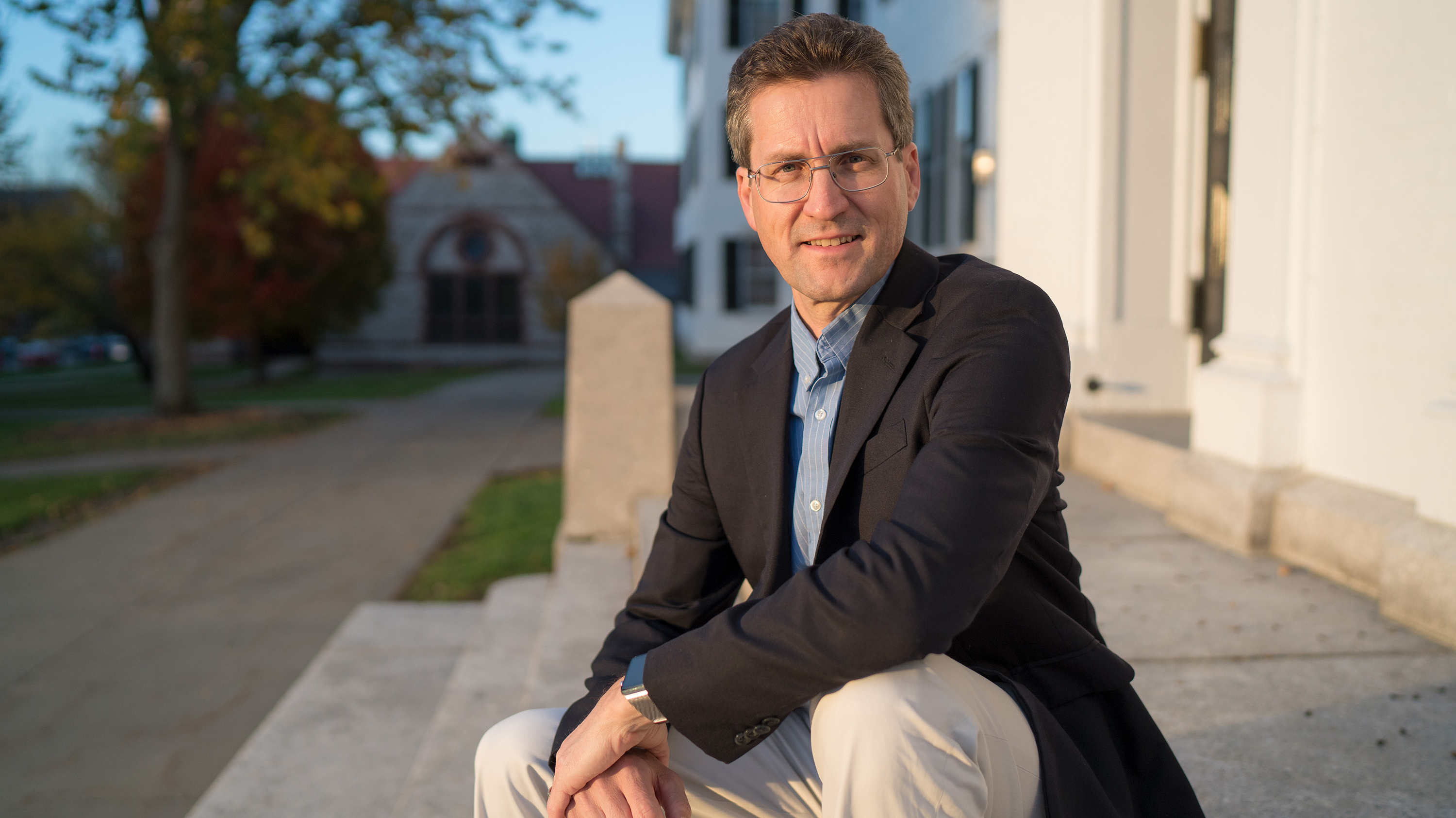