What happens when you send your creative nonfiction students out into the Upper Valley of Vermont and New Hampshire and ask them to write about what they find? And then publish those articles in a new online magazine of literary journalism that you launch with your students? 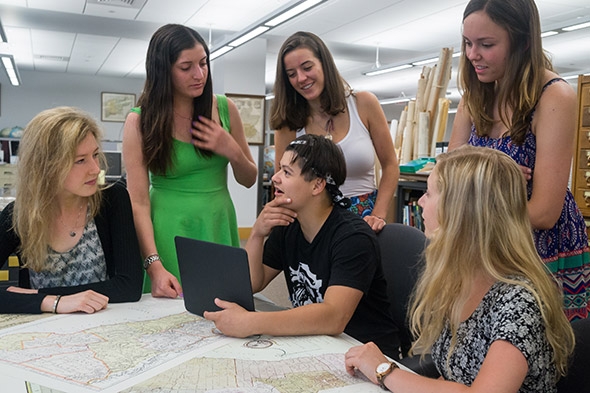 As Mellon Assistant Professor of English Jeff Sharlet and his spring term “English 83” class discovered with 40 Towns, readers take notice. Since going live on June 17, the 40 Towns website has garnered more than 13,000 page views and received positive comments from writers and editors from a wide range of publications, including National Geographic, Rolling Stone, Wired, Harper’s, Mother Jones, and The New Republic. And two articles have already won acclaim from online literary magazines.

“The Shady Lady,” by 40 Towns Assistant Editor Danny Valdes ’13, was Longreads’ College Pick of the Week on June 20, and “Tiny Birthday” by Laina Richards ’14 was selected for the “Women We Read This Week” column by Vela magazine on June 27. Richards’ article is about David’s House, the “home-away-from-home for the families of children receiving treatment at Dartmouth-Hitchcock Hospital,” while Valdes explored the Shady Lawn Motel in White River Junction, Vt.

Editor Eva Xiao ’14 and Valdes are thrilled by the response to 40 Towns, which is supported by the Dartmouth College English Department Class of ’54 Fund. “Whatever goals I had, we surpassed them. The feedback has been absolutely incredible,” says Valdes, a recent graduate who majored in history modified by women’s and gender studies. “I never imagined it getting this much praise, this much readership. Now, I only wish it to go further!”

Xiao says, “For many of the student contributors of 40 Towns, this is their first published piece. I hope this experience has encouraged them to see their work as work that should be published and read by the world instead of simply a piece for English class.”

Richards had never taken a Dartmouth creative writing course before “English 83,” in which Sharlet preaches the power of multiple revisions and students read and discuss each other’s work in a workshop style. An English and psychology double major and a French minor, Richards calls it “one of my favorite classes that I have taken at Dartmouth. I think the concept of the class —going out into towns you aren’t familiar with and finding subjects and stories that mean something to you—really pushed me out of my comfort zone and allowed me to learn quite a lot.” 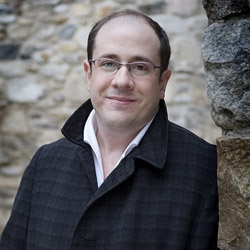 “In all my classes I emphasize the high stakes of writing—especially nonfiction writing in which you’re telling stories about other people’s lives,” says Mellon Assistant Professor of English Jeff Sharlet. (Photo courtesy of Jeff Sharlet)

Sharlet knew he wanted to start a literary publication for his creative nonfiction writing students when he was hired by Dartmouth in 2010. “I worked on something similar with the writer Michael Lesy when I was an undergrad (at Hampshire College), and it was transformative,” says the author of the bestseller The Family, and of C Street and Sweet Heaven When I Die. “But it wasn’t until this past winter, when I saw a student (Catherine Treyz ’13) turn a story about a bead shop in White River Junction—just a bead shop—into something amazing that I realized 40 Towns was the way to do it.”

Xiao and Valdes, who had taken two of Sharlet’s writing classes, designed and created the website during the 2013 spring term for an independent study project class with Sharlet. Xiao, a computer science major and creative writing minor, saw 40 Towns as a way to explore the editorial side of writing, and says she also “wanted to continue reading the incredible stories my peers had written on the Upper Valley. Some of the worlds they described seemed as exotic and fascinating as the distant countries many of my peers at Dartmouth have had the privilege of visiting.”

The name “40 Towns” refers to the towns of New Hampshire and Vermont’s Connecticut River Valley. Sharlet thought it important that his students learn more about the local community, so the class subscribed to the daily Valley News newspaper and set off into the towns surrounding Dartmouth to find stories.

“A regional frame allows the stories to complement each other in interesting ways, making 40 Towns not just a grab bag but a collective endeavor by young writers thinking about that first character, place,” says Sharlet. “And what a place this is! The Upper Valley defies so many of the stereotypes of quaint New England that many students bring to Dartmouth. They think they know what they’re going to find. Instead, they’re stunned. So many of our students have traveled the world, but they’ve never been to White River Junction.”

Xiao was one of those students who had never been to White River Junction before writing “A Lonely X,” about a speed dating event in the Vermont village of nearly 3,000 residents. She also has a forthcoming piece about the Upper Valley Vixens, a female roller derby team. “Previously, I never thought my work to be remotely on par with ‘real writing’ done by ‘professional’ writers,” says Xiao. “This experience has shown me that student writers have a lot to contribute and don’t have to wait for a career to start considering their work seriously.”

Which is exactly what Sharlet hoped his students would learn by writing for 40 Towns. “In all my classes I emphasize the high stakes of writing—especially nonfiction writing in which you’re telling stories about other people’s lives. Working toward publication makes those high stakes brilliantly clear. You’re not just writing for a grade, or for the teacher, or for your own entertainment. Your story about someone else’s life is going to be public. People are going to read it. You’d better put everything you have into it.”

40 Towns offers a place for students to showcase their work, and Sharlet hopes this will lead to future publishing opportunities. “Young writers can no longer get on a ladder that begins with a local paper or a 200-circulation literary journal and climbs up to novels or The New Yorker,” he says. “Instead, they can begin with amazing stories. And people will read them.”