Shedding New Light on the Brightest Objects in the Universe

Quasars are among the brightest, oldest, most distant, and most powerful objects in the universe. Powered by massive black holes at the center of most known galaxies, quasars can emit enormous amounts of energy, up to a thousand times the total output of the hundreds of billions of stars in our entire Milky Way. 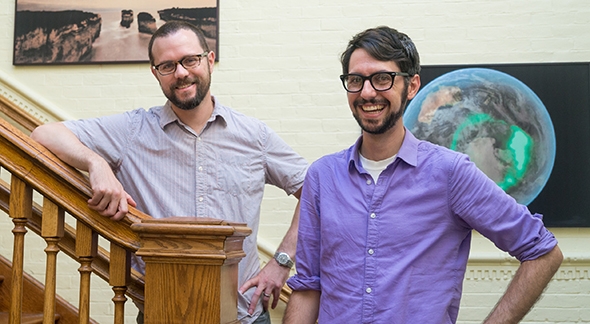 Astrophysicists Ryan Hickox (left) and Kevin Hainline are able to see the extent to which quasars and black holes can affect their galaxies. (Photo by Eli Burakian ’00)

Dartmouth astrophysicists Ryan Hickox and Kevin Hainline and colleagues have a paper scheduled for publication in The Astrophysical Journal, detailing discoveries based upon observations of 10 quasars. They documented the immense power of quasar radiation, which reaches out for many thousands of light years to the limits of the quasar’s galaxy. (The paper is now available to the public through the Cornell University Library.)

“For the first time, we are able to see the actual extent to which these quasars and their black holes can affect their galaxies, and we see that it is limited only by the amount of gas in the galaxy,” says Hainline, a Dartmouth postdoctoral research associate. “The radiation excites gas all the way to the margins of the galaxy and stops only when it runs out of gas.”

The radiation released by a quasar covers the entire electromagnetic spectrum, from radio waves and microwaves at the low-frequency end through infrared, ultraviolet, and X-rays, to high-frequency gamma rays. A central black hole, also called an active galactic nucleus, may grow by swallowing material from the surrounding interstellar gas, releasing energy in the process. This leads to the creation of a quasar, emitting radiation that illuminates the gas present throughout the galaxy.

“If you take this powerful, bright radiation source in the center of the galaxy and blast the gas with its radiation, it will get excited in just the same way the neon gets excited in neon lamps, producing light,” says Hickox, an assistant professor in the Department of Physics and Astronomy at Dartmouth. “The gas will produce very specific frequencies of light that only a quasar can produce. This light functioned as a tracer that we were able to use to follow the gas excited by the black hole out to large distances.” 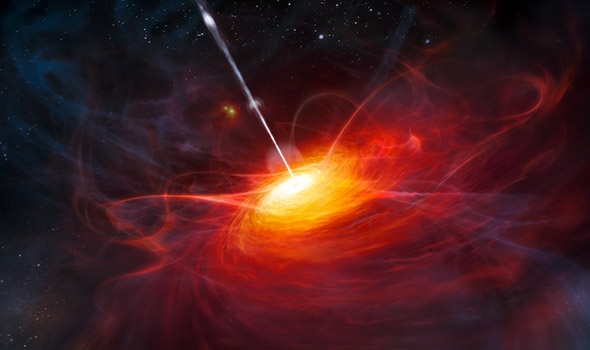 Artist’s rendering of ULAS J1120+0641, a quasar powered by a black hole with a mass 2 billion times that of the Sun. (Photo by ESO/M. Kornmesser)

Quasars are small compared to a galaxy, like a grain of sand on a beach, but the power of their radiation can extend to the galactic boundaries and beyond.

The illumination of gas can have a profound effect, since gas that is lit up and heated by the quasar is less able to collapse under its own gravity and form new stars. Thus, the tiny central black hole and its quasar can slow down star formation in the entire galaxy and influence how the galaxy grows and changes over time.

“This is exciting because we know from a number of different independent arguments that these quasars have a profound effect on the galaxies in which they live,” Hickox says. “There is a lot of controversy about how they actually influence the galaxy, but now we have one aspect of the interaction that can extend on the scale of the entire galaxy. Nobody had seen this before.” 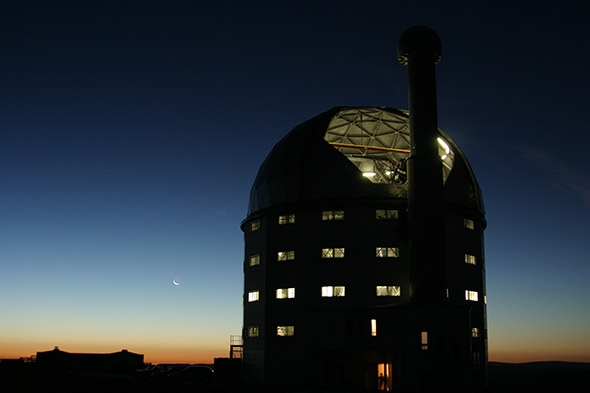 Hickox, Hainline, and their co-authors based their conclusions on observations made with the Southern African Large Telescope (SALT), the largest optical telescope in the southern hemisphere. Dartmouth is a partner in SALT, giving faculty and students access to the instrument. The observations were performed using spectroscopy, in which light is broken down into its component wavelengths. “For this particular kind of experiment, it is among the best telescopes in the world,” says Hickox.

They also used data from NASA’s Wide-field Infrared Survey Explorer (WISE)—a space telescope that imaged the whole sky in the infrared. The scientists used observations in infrared light because they give a particularly reliable measure of the total energy output by the quasar.