Size and Memory Both Matter in Quantum Computing

With their promise of unimaginable speed and huge capacity, quantum computers stand to revolutionize the world of information processing. They have the potential to be vastly more powerful than our current digital devices, with the ability to solve important computational problems and simulate complex physical systems with unprecedented efficiency. 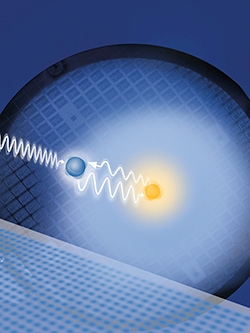 Like Dartmouth’s Lorenza Viola, physicists at the University of California, Berkeley are working toward a quantum computer storage solution. This image shows how they have processed information in the electron spin (blue) and stored it in the nuclear spin (yellow) of phosphorus atoms through a combination of microwave and radio-frequency pulses. (Photo courtesy of Flavio Robles, Berkeley Lab Public Affairs)

Quantum computing operates at the subatomic level, where the familiar laws of classical physics don’t apply. A different set of rules—quantum mechanics—comes into play to explain the behavior of matter and energy on the atomic and subatomic scale—in essence, a different reality from the everyday, observable world.

Unlike today’s silicon-based microprocessors that manipulate ones and zeros as bits and bytes, quantum computing uses quantum physics to represent and process information that is stored in quantum bits or “qubits.” A qubit can be a one, a zero, and everything in between, simultaneously, and can be utilized by physical systems as different as the “spin” of an electron in a trapped atom and a semiconductor quantum device.

As Dartmouth Professor of Physics and Astronomy Lorenza Viola notes, these concepts can be mind-boggling. “We are so big, this is so microscopic, and we just don’t have enough imagination to visualize things at this level.“

In the drive to build a useful quantum computer, the simple-sounding job of effectively preserving quantum information in a quantum memory is one of the more daunting tasks. The very same physics that makes quantum computers potentially powerful also makes them prone to errors.

Professor of Physics and Astronomy Lorenza Viola is the director of the Quantum Information Initiative at Dartmouth. (Photo by Joseph Mehling ’69)

”Quantum systems inevitably suffer from noise due to their interaction with the surrounding environment, and this noise tends to rapidly degrade or distort quantum information,“ Viola says. ”With this degradation, the quantum information loses its precious quantum properties, even when it is just being stored idly in memory. Keeping quantum information alive for long periods of time, while still making it accessible to the computer, is thus a key challenge.“

Viola and former Dartmouth research professor Kaveh Khodjasteh, in collaboration with Michael Biercuk’s team at the University of Sydney in Australia, have developed a new way to design a practically useful quantum memory, bringing quantum computers a step closer to reality. News of this achievement was reported in the June 19 issue of the journal Nature Communications.

The new method is based on techniques to build in error resilience at the level of the quantum memory hardware, says Viola, who is director of the Quantum Information Initiative at Dartmouth. The basic idea is to exploit suitable quantum control techniques—so-called ”dynamical decoupling“, which Viola has been investigating for more than a decade—to stabilize the quantum data in the presence of environmental noise.

Dynamical decoupling techniques based on carefully crafted sequences of ”pulses“ have long been used to improve resolution in nuclear magnetic resonance, for instance, in the analysis of protein structure. These techniques have also been shown to protect quantum information in quantum systems by filtering out noise.

What the team figured out is how to break a complicated sequence of control pulses into a series of simpler, carefully chosen segments in a way that prevents errors from increasing beyond a certain level even after long storage times.