Dartmouth Associate Professor of Studio Art Soo Sunny Park’s Unwoven Light has captivated the art and design blogosphere, been featured in Time magazine, and is number one on BuzzFeed’s list of “22 Dreamy Installations You Want To Live In.” 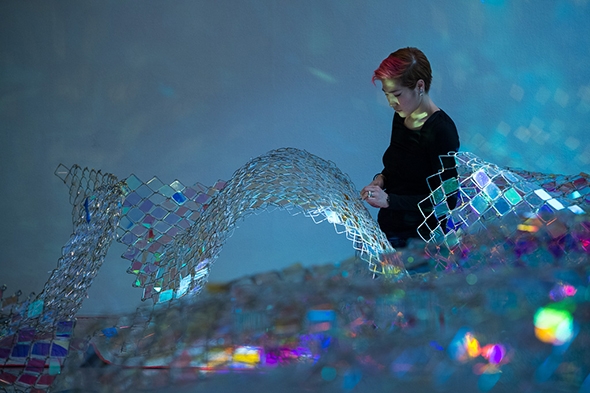 On display at Rice University Art Gallery in Houston, Texas, through August 30, Park’s latest exploration into the ephemeral qualities of light is composed of 37 sections of chain link fencing. Each section took seven hours to weld and then an additional 87 hours per section to fabricate by affixing thousands of pieces of iridescent Plexiglass to the fencing. Suspended from the walls and ceiling of the gallery, the piece is described by the Houston Chronicle as looking like “a flock of shimmering birds, the rippling waters of a creek, a net dripping with water or a galaxy about to explode.”

Unwoven Light has also inspired a video by filmmakers Mark and Angela Walley, a musical performance by students in Rice’s Shepherd School of Music, and a video lecture by Rice physics professor Jason Hafner entitled “A Physicist Gets Art (For the First Time).”

Rice Gallery Director Kimberly Davenport says, “Professor Hafner’s popular talk speaks to how Unwoven Light has engaged all parts of our campus from the humanities to the sciences.”

Davenport has been impressed by the response of gallery visitors, who “have filled our guestbook with comments thanking Soo Sunny Park for creating an installation that is inspiring for its ingenuity and rewarding for its experiential power. One visitor’s comment—‘magical, mesmerizing, magnificent!’—sums up how many people have responded. I’ve seen Rice students so struck by the installation’s presence that they have stopped midway between classes to photograph Unwoven Light.” 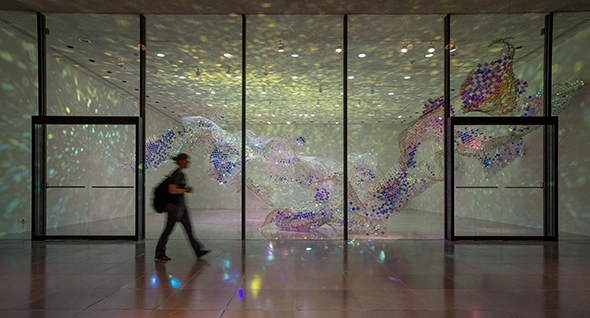 Park first visited the Rice Gallery in July 2012 to begin envisioning her piece and how best to utilize the space and the combination of artificial lighting and the natural light that pours in through the front glass wall. Then she had to figure out how to build the challenging piece she had imagined. The Korean-American artist was ultimately assisted by two people, including Jennifer Gouge ’10, in Park’s Lebanon, N.H., studio.

“The welding was painful and time-consuming, but straightforward,” says Park, who bent each section of fencing and then welded the corners to hold the shape. “Working out how to cut, sand, drill, and then tie the Plexiglass diamonds to the fencing was very difficult. Not many people had worked with that specific kind of Plexi before. I finally figured out how to laser cut it, which made the process a lot smoother.”

The piece was inspired in part by a Styrofoam cup that Park once saw stuck in a fence. She began pondering ways to explore the simultaneous porosity and rigidness of chain link, while also incorporating the reflective properties of Plexiglass that has been coated with a dichroic film. “Like a net, the sculpture is a filter that is meant to capture the light that is already there and force it to reveal itself,” she says. “Now we can see it, the light, in purple shadows and yellow-green reflections that both mirror the shape of the fence and restructure the space they inhabit.”

Studio Art Professor Esmé Thompson, chair of the department at Dartmouth, says Park’s fellow studio art faculty members are “very proud of the recognition Sunny’s work is receiving. It is important to our students to realize that faculty in the Studio Art Department have active lives in the studio and are exhibiting their work in national venues. Sunny is a great example of this pursuit.”

Park, who is currently in Finland on an artist’s residency called the Ateljé Stundars at the Stundars Museum in Solf, says she is “overwhelmed” by the positive feedback and supportive emails she has received. “It is amazing how fast mass media can spread information, and how freely individuals can express and exchange their interests,” she says. “It is wonderful to get such a positive response from so many people.”

Unwoven Light next heads to Dayton, Ohio, in September, and may travel to other galleries after that. So far, Park says, there is no plan to show the work at Dartmouth, but adds that “perhaps there will be an opportunity.” Her next major New England installation will be at the New Britain (Conn.) Museum of American Art in February 2014.