When a farmer and a climate scientist talk about the weather, they’re not just passing time—it’s serious business.

Climate change, including shifts in average temperature and precipitation as well as the probability of extreme events such as drought, floods, and heat waves, are not abstract political questions to the farmer; they are matters of economic life and death. 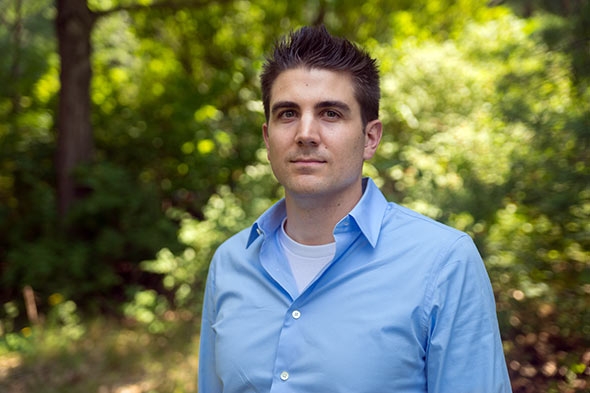 Assistant Professor Jonathan Winter, a climate scientist hired this month by the geography department, talks about his research on climate change and its effect on agriculture. (Photo by Eli Burakian ’00)

This is a reality climate scientist Jonathan Winter knows well. He did his post-doctoral work in hydroclimatology at the NASA Goddard Institute for Space Studies and Columbia University with agronomist Cynthia Rosenzweig, a pioneer in the study of climate change and agriculture. The Department of Geography hired Winter this month as an assistant professor.

“We’re thrilled that Jonathan Winter will be joining the geography department,” says department chair Susanne Freidberg. “Besides working at the cutting edge of one of the key areas of climate change modeling, he’ll be teaching courses related to agriculture, which are in high demand at Dartmouth.”

Winter did his PhD work at the Massachusetts Institute of Technology in hydroclimatology, focusing on high-resolution regional climate modeling. He simulates the atmosphere and land surface on a fine grid, from 60 kilometers down to 10 kilometers wide, which makes possible the analysis of local climate variability and change. Winter works throughout the world, with an emphasis on Central America, the American Midwest, California, and the Lake Champlain Basin in Vermont.

Global climate models, with grid scales of 120 kilometers or more, can lack details in topography and coastlines, and omit local atmospheric processes. In contrast, high-resolution regional climate models like the ones Winter works with operate at much finer scales of space and time, making them ideal for exploring precipitation patterns in Costa Rica or temperature variations across the Green Mountains, Winter says.

And because these projections are regional, they can play a critical role in economic and social decision making, such as water resources management, land use, and crop planting times and irrigation, he says. When the effects of climate change become a debate about who will have access to dwindling water supplies or how much farmers must pay for crop insurance, access to accurate, local, climate information is critical, Winter says.

“Climatology has always been an important part of physical geography,” Winter says, “But what’s exciting about climate science in contemporary geography is the emphasis on blending social and physical disciplines.”

Climate science is the ideal area to benefit from this type of interdisciplinary research, he says, “because of how dramatically humans have modified the Earth system, and the extent to which climate drives human activity on Earth.”

Winter is developing a course for the winter term called “Climate Change and the Future of Agriculture,” which explores the physical geography of agricultural production around the world, looking at interactions between crops, climate, water, and technology.

In the spring, he will teach “Global Climate Change,” an overview of the Earth’s climate system and the physical basis, impact, and social dimensions of climate change. The class was previously taught by Laura Conkey, a longtime geography professor who is transitioning toward retirement.

Winter says he is excited about working with Dartmouth students to explore key issues at the interface of climate and society.

“How does the perception of climate change influence willingness to mitigate greenhouse gas emissions? What will be the global distribution of croplands by the end of the century? Where will water scarcity cause human migration? Can climate change adaptation be leveraged to promote equity? These are the exciting questions we face in climate science today,” Winter says.