Dartmouth students Jordan Terry ’15, Renee Scott ’13, Danielle Moore ’15, and Taylor Stevens ’15 were part of the 50th Anniversary March on Washington on Wednesday, August 28, 2013, marking the historic march for jobs and justice that culminated in Martin Luther King Jr.’s “I Have a Dream” speech.

Terry, president of the Dartmouth chapter of the National Association for the Advancement of Colored People (NAACP), says the trip was both a celebration and a renewal of the fight for social and economic equality that the 300,000 who marched in 1963 were demanding. 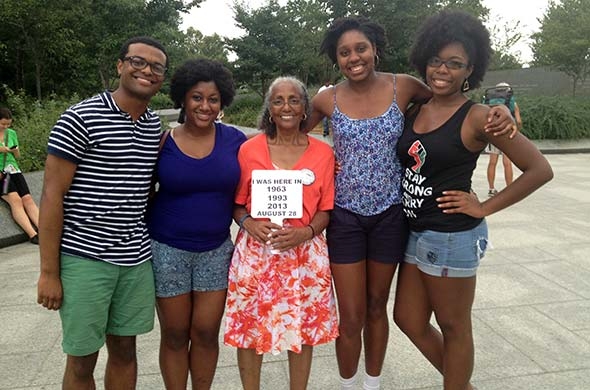 On the 50th Anniversary March on Washington, on Wednesday, August 28, 2013, marchers, from left, Jordan Terry ’15, Renee Scott ’13; veteran civil rights activist Betty Waller Gray of Richmond, Va.; Danielle Moore ’15; and Taylor Stevens ’15 visited the Martin Luther King Jr. Memorial. Terry says Gray “was delighted to take a photo with us, but only if we agreed to ‘keep up the movement, because her generation is getting old.’ ” (Photo courtesy of Jordan Terry ’15)

“Walking in the same footsteps of those who marched 50 years ago was a deeply humbling and moving experience,” Terry wrote in a message when he returned from Washington. “The speeches by Presidents Carter, Clinton and Obama were inspiring as they noted the many gains, but also the many struggles our country faces in fully realizing Martin Luther King Jr.’s dream.”

After the speeches at the Lincoln Memorial, the three walked to the Martin Luther King Jr. Memorial, added to the National Mall just last year. On the way they met Betty Waller Gray of Richmond, Va., a veteran civil rights activist who was carrying a sign that read “I was here in 1963  1993  2013 August 28.”

“As we stood admiring the monument we noticed Mrs. Gray’s sign and introduced ourselves. She was delighted to take a photo with us, but only if we agreed to ‘keep up the movement because her generation is getting old.’ ”

Terry, Moore, and Stevens, all members of the NAACP, received funding for the trip from the President’s Office, the Office of Pluralism and Leadership, and the Office of Black Student Advising.

At Dartmouth, about 100 people attended a commemoration of the march, gathering on the Green for a moment of silence and the ringing of the Baker-Berry bells 50 times, followed by a bell chimes rendition of “We Shall Overcome.” The bells rang at precisely 3 p.m. in concert with communities all over America, including on the steps of the Lincoln Memorial, to mark King’s call:

“This will be the day when all of God’s children will be able to sing with new meaning:

My country ‘tis of thee, sweet land of liberty, of thee I sing. Land where my fathers died, land of the Pilgrim’s pride, From every mountainside, let freedom ring!”