Dartmouth at Telluride: Students and Alumni Are Film Festival Fixtures

In August 1974, when Bill and Stella Pence screened two silent films at an opera house in Telluride, Colo., that they had recently renovated, they had no idea a film festival was being created. But that’s exactly what happened, and this Labor Day weekend marks the 40th year of the world-renowned Telluride Film Festival, beloved by cinephiles and known for keeping its film slate a secret until the day before the festival begins. 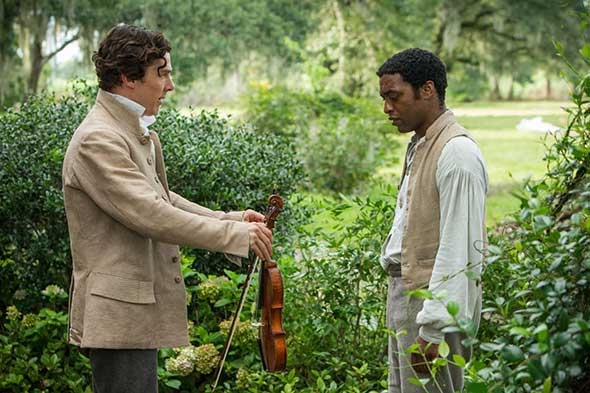 “12 Years a Slave,” based on the life of a 19th-century New Yorker abducted and sold into slavery in the Deep South, starring Benedict Cumberbatch, at left, and Chiwetelu Umeadi Ejiofor, opens the Telluride at Dartmouth festival on September 20. (Photo courtesy of the Hopkins Center)

“What we thought would be a one-time event became what our lives would be for the next 30-some years,” says Pence of the festival he and his wife founded with James Card, head of the George Eastman House’s motion picture collection in Rochester, N.Y., and Tom Luddy, then-director of the Pacific Film Archive in Berkeley, Calif. “It’s one of those things about life’s unintended consequences. You make a turn and you don’t know what it’s going to lead to.”

And thanks to Pence, who came to Dartmouth in 1983 as director of film at the Hopkins Center for the Arts, Telluride has also led to exciting opportunities for many Dartmouth students and alumni. Since 1985, students and young alumni have been interning with Pence, who was once one of the owners of the movie distributor Janus Films.

The Hopkins Center for the Arts has announced the lineup for this year’sTelluride at Dartmouth festival:

Ticket sales begin September 4 for Hop members and September 6 for the public. All shows are in Spaulding Auditorium in the Hop.

Each year, students help him screen and review the short films submitted for festival consideration, and then travel to Telluride to work at the four-day festival. (This year’s special anniversary festival is five days.) More than two-dozen alumni return every year to volunteer at Telluride.

“Alumni will be here this year stretching back to 1952,” says Chris Robinson ’86, a film major who has been working annually at Telluride since his 1985 internship with Pence. Among them will be Buck Henry ’52, one of the festival’s guest directors.

Robinson spends about three months every year working as the festival’s technical coordinator. This means getting the films to Telluride from around the world, and then helping the staff operate the digital cinema in the festival’s six venues. What keeps him coming back year after year to be a member of Telluride’s crew?

“You’re seeing the world’s best films in an incredible location, an almost impossible-to-reach town located in a box canyon in the San Juan Mountains. And for a lot of us it’s become an annual Dartmouth gathering and tradition,” says Robinson, who recently completed a PhD in film studies. “Our big hospitality tent is called Brigadoon. And the festival is a lot like that magical Irish village that only exists for one weekend a year.”

Evan Golden ’04, who likens Telluride to “summer camp,” will be working at his 11th consecutive festival this year. Like Robinson, he is a former Dartmouth Film Society (DFS) director. Golden interned for Pence for three summers and now manages the Galaxy Theater, a high school in Telluride that’s transformed into a theater for the festival. He says that Pence’s interns, most of whom were former DFS directors, share “an instant bond” at Telluride and “swap stories about late nights in Wilson Hall screening shorts.” 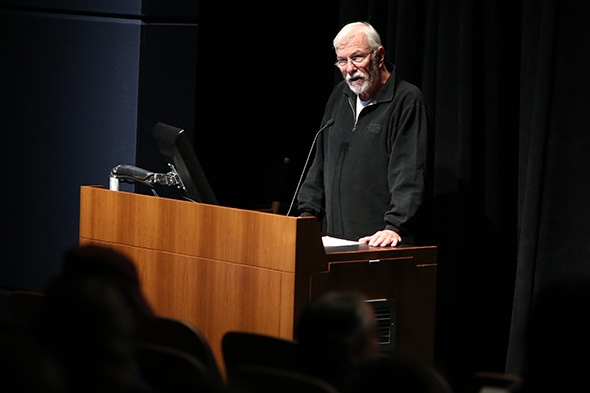 Bill Pence, director of film at the Hopkins Center for the Arts and co-founder of the Telluride Film Festival, has provided exciting opportunities for many Dartmouth students and alumni. (Photo by Rob Strong ’04)

“As a student, Telluride had so much to offer,” says Golden, a screenwriter. “For one, it exposed me to films and filmmakers that I had never heard of before, even as a film student, and on some occasions allowed me to interact with the filmmakers. I knew that I wanted to eventually work in the film industry, so to be able to see these fantastic, sometimes challenging movies and hear the filmmakers speak and discuss their processes and the challenges they overcame, it was all very inspiring.”

Communications consultant A.J. Fox ’09 has been attending Telluride since 2006, and intends “to go back every summer for as long as I can.” He enjoys the sense of Dartmouth camaraderie at the festival, and is grateful for his experience as a student intern.

“I am not aware of any other undergraduate liberal arts program in the country that offers an opportunity like this for students to be so directly piped in to an incredible film program and one of the world’s greatest festivals,” says Fox, who volunteers in theater operations at Telluride’s Mason’s Theater.

“There’s not a lot of sleep at this festival because you’re working eight to 10 hours and then trying to see as many movies as possible. I think my record is 18 movies in four days. But I always tell the new kids that everything you think is going to be great about the festival, multiply it by 30.” 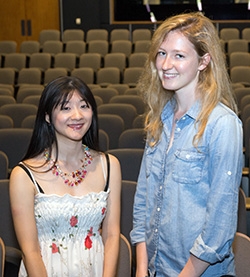 Interns Katie Kilkenny ’14 and Tien-Tien Jong ’10 helped Bill Pence, director of film at the Hopkins Center, review 1,085 short films that had been submitted to the 2013 Telluride Film Festival. (Photo by Eli Burakian ’00)

Katie Kilkenny ’14 will be one of Telluride’s “new kids” this year. In her role as a junior intern, she and senior intern Tien-Tien Jong ’10 helped Pence review 1,085 short film submissions, which they narrowed down to 60. Since retiring in 2006 from the Colorado festival, Pence has continued to review the short film submissions. The Telluride selection committee in Berkeley makes the final call on which of roughly 20 short films will be shown at the festival.

“Bill has a really good eye and I’ve learned a lot from what he chooses and what he doesn’t,” says Kilkenny, an English major who says she “was literally jumping up and down” in her room when she learned that she’d be going to Telluride this year. She’ll be working at the Werner Herzog Theater, a new 650-seat theater named for the famed director (who will be a Montgomery Fellow at Dartmouth this fall).

“It’s going to be energizing to be around so many people who love film, and to see films that I wouldn’t ordinarily have the opportunity to see,” says Kilkenny.

Jong, another former DFS director, will be returning for her third year at Telluride, where she will work as an usher at the Galaxy Theater. A Utah native, the film major grew up attending the Sundance Film Festival, where her mother volunteered. “My favorite aspect of the Sundance Film Festival was watching the short films, so it’s been a really good experience to be involved with the shorts programming through this internship.”

In addition to being the 40th anniversary of Telluride, this year’s festival will be special because the Pences will be attending for the first time since they retired from the festival.

“We’re all looking forward to having Stella and Bill back,” says Fox. “Bill is the reason we alumni are at the festival, and I hope he’s aware of the immense positive impact that he’s had on generations of Dartmouth students who have gone on to make this festival a part of their lives for decades. It’s an incredible thing.”

When Telluride Film Festival founder Bill Pence came to Dartmouth in 1983 as the Hopkins Center for the Arts’ director of film, he thought it “might be nice to bring Telluride to Dartmouth.”

So since 1985, Dartmouth audiences have gotten a sneak peak at half a dozen Telluride selections such as The King’s Speech, the 2011 Academy Award winner for best picture.

Six new films fresh from the festival come to the Hop Friday, September 20, through Thursday, September 26, well before they go into general release.