Experts Discuss the “Dark Side of the Digital Revolution”

Cyber espionage and the threat of a cyber war are two of the biggest challenges facing the U.S. government and American corporations, said Under Secretary for the Department of Homeland Security’s (DHS) National Protection and Programs Directorate Rand Beers ’64, and international security expert and author Richard A. Clarke, during a recent lecture at Dartmouth entitled “The Dark Side of the Digital Revolution.” 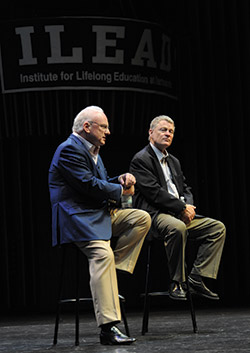 Speaking July 24 as part of the Institute for Lifelong Education at Dartmouth (ILEAD) summer lecture series “Digital Revolution: Promise and Threat,” Clarke and Beers warned of terrorist computer hackers crippling U.S. banks and public utilities, and said foreign governments that authorize hacking into American corporate computers pose a threat to the economy. “We pay billions for research and development and they get it for free by stealing,” said Clarke, who served the last three Presidents as a senior White House Advisor and is currently chairman and CEO of Good Harbor Consulting.

Clarke and Beers, who joked that he was last onstage in Spaulding Auditorium as the “Second Witch” in a 1964 Dartmouth stage production of Macbeth (performed in German), spoke with Dartmouth Now in this video interview. 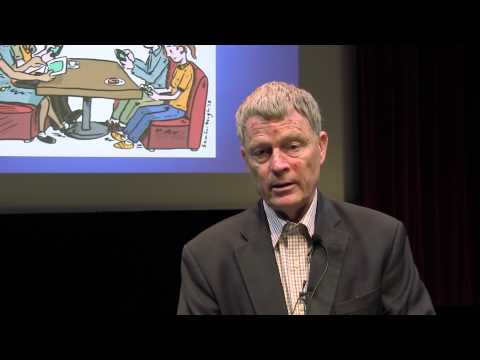 n addition to Beers’ role as under secretary, to which President Obama appointed him in 2009, he was appointed DHS’s Acting Deputy Secretary in May 2013 by DHS Secretary Janet Napolitano. When she appointed him, Napolitano said, “Under Secretary Beers has served in leadership roles under four presidents—a remarkable testament of his devotion to public service.”

The ILEAD summer lectures are held in Spaulding Auditorium in the Hopkins Center for the Arts every Wednesday at 9 a.m. The final lecture is August 21. C-SPAN, the national public affairs network, recorded ILEAD’s first summer lecture and will be televising it in August. For more information about the lecture series, visit ILEAD.

ILEAD, which has more than 1,600 members, is a self-supporting department of the College. The department has been sponsoring a summer lecture series at Dartmouth since 1990, and also offers study groups and mini-courses each term for adults in the Upper Valley.