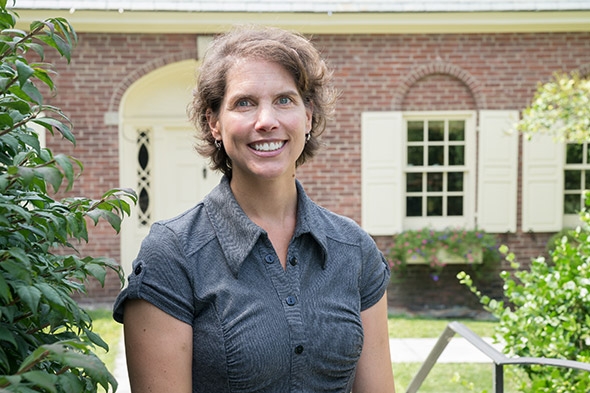 Montgomery Fellows Program Director Christianne Hardy Wohlforth is looking forward to the fall lineup of fellows. “Each offers us a different medium in which to communicate important ideas. I can’t wait to see how students will engage with each of them.” (Photo by Eli Burakian ’00)

The endowment, which invites exceptional individuals to the college to live, work and share their perspectives as members of the community, was established in 1977 through a gift of Kenneth ’25 and Harle Montgomery.

Christianne Hardy Wohlforth, the program’s new director, says the Montgomerys set up the endowment to bring internationally renowned individuals to Hanover to mingle with students and faculty and thereby enrich the Dartmouth community.

Wohlforth, an adjunct assistant professor in the Department of Government, is preparing for the arrival this fall of a succession of fellows no less inspiring: filmmaker Werner Herzog, philosopher Rebecca Newberger Goldstein, and actor and director Alan Alda.

The fellows are invited to come to Dartmouth to present a Montgomery Endowment lecture or performance, which is open to all, and to meet with members of the community. Stays vary from days to months. Those who are in residence for an extended period have use of the Montgomery House, a gracious 1920s brick home adjacent to Occom Pond that was part of the Montgomerys’ endowment.

Fellows use their time at Dartmouth in a variety of ways. Many, like current Montgomery Fellow photographer Joel Sternfeld ’65, teach a course. But the crux of the endowment as envisioned by Kenneth and Harle Montgomery is for the fellows to enrich the college through informal interactions with students and faculty, Wohlforth says.

“It is not just about content delivery,” she says. “What students really crave is engaging discussions with these inspiring individuals to help them make sense of that content. The informal quality of these interactions makes this possible.” 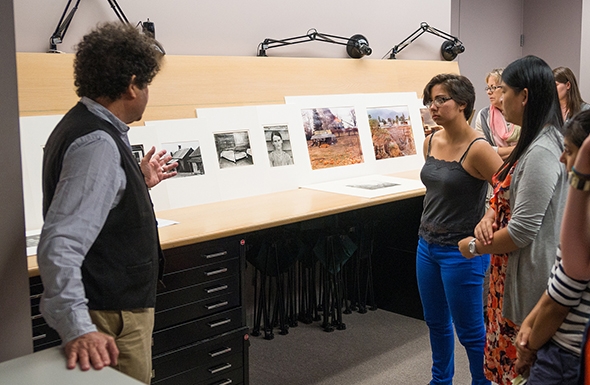 During his Montgomery Fellowship this summer, photographer Joel Sternfeld ’65, left, taught the course “Word and Image.” (Photo by Eli Burakian ’00)

Sternfeld, an innovator in the use of color photography whose keen, ironic vision is unmistakable, taught a studio art class called “Word and Image.” He and his family have hosted a cookout at the Montgomery House and met informally over lunch or after class with community members interested in his work.

According to Wohlforth, Montgomery Fellows are selected by the Montgomery Endowment Steering committee based on nominations from the Dartmouth community. Nominations require a second from another part of campus to ensure the individual will have appeal beyond a single department or program. The director will extend invitations to potential fellows and negotiates the details and schedule of the fellowships in a process that can take up to two years, she says.

Wohlforth says she is speaking to student groups, faculty, department chairs, and others to encourage people to think about candidates who may be outside the traditional fields of expertise. She hopes to boost the number of nominees in the hard sciences, for example, and is looking to students for insight into cultural icons such as athletes and new media artists who may not be on the committee’s radar screen. Because the process from nomination to appointment can be so lengthy, Wohlforth says the nominating process could use some re-thinking.

Shifting to the near term, Wohlforth says the current Montgomery Fellows lineup couldn’t be more exciting and engaging, starting with a film compilation and dialogue with Werner Herzog on September 18. The filmmaker’s visit will be followed by a three-month residency by philosopher and novelist Rebecca Newberger Goldstein, whose latest novel, 36 Arguments for the Existence of God: A Work of Fiction, has been widely acclaimed. Then, on October 10, Alan Alda will be on campus to share his latest passion—helping scientists and researchers communicate their work to a broad audience.

“It’s very exciting—there will be many opportunities for spontaneous dialogue and a chance to get to know these luminaries as real people,” Wohlforth says. “Each offers us a different medium in which to communicate important ideas. I can’t wait to see how students will engage with each of them.”

Werner Herzog is a German film director, producer, screenwriter, actor, and opera director. His films include Grizzly Man and Nosferatu the Vampyre. He has most recently been in the news for a 30-minute PSA he directed about the dangers of texting and driving, called From One Second to the Next.

Rebecca Newberger Goldstein’s work in philosophy includes Incompleteness: The Proof and Paradox of Kurt Gödel, and Betraying Spinoza: The Renegade Jew Who Gave Us Modernity. Her novels include the critically acclaimed bestseller The Mind-Body Problem. In 1996, she received the MacArthur Award, also known as the “genius prize,” for her ability to “dramatize the concerns of philosophy without sacrificing the demands of imaginative storytelling.” 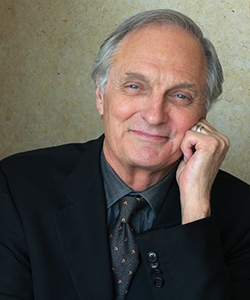 Alan Alda, an actor, director, and writer known for his TV work in M*A*S*H* and West Wing, has had a lifelong interest in science. He hosted PBS’s Scientific American Frontiers from 1993 to 2005, and became convinced that many researchers have wonderful stories to tell, but some need help in telling them. Alda founded the Alan Alda Center for Communicating Science, and has led workshops to help scientists learn to communicate more directly and effectively.