Pablo Picasso (1881–1973) was at his most ferociously inventive between 1930 and 1937, when he created a dazzling series of etchings that are known today as the Vollard Suite. The Hood Museum of Art is one of the few museums in the world to own the complete series, and is presenting the entire Vollard Suite through December 20, 2013. 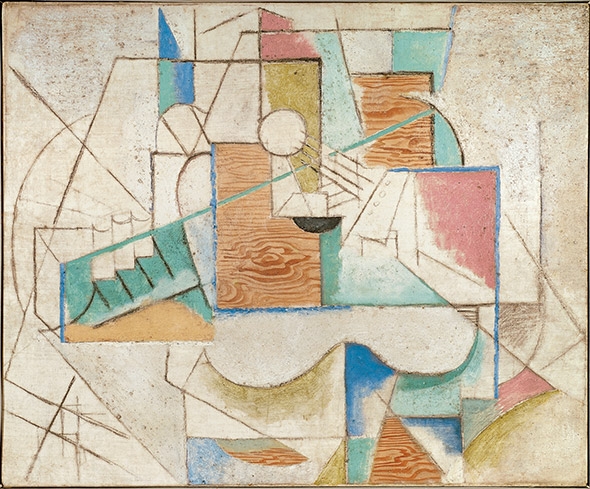 A complementary exhibition, “Cubism and Its Legacy,” drawn from the Hood’s extensive collection of modern and contemporary art, is being shown concurrently. An opening celebration for the exhibitions will take place October 2 at 5:30 p.m.

“The Vollard Suite etchings are among the most extraordinary prints ever created,  and reveal the Spanish artist’s mastery of the printmaking process,” says Michael Taylor, director of the Hood. “The Vollard Suite functions as a visual diary of the artist’s creative thinking and preoccupations during a pivotal moment in his career. These works illustrate the two worlds to which Picasso owed allegiance at this time, namely the harmony and order of classical art and the surrealist world of dreams and the imagination.”

Named after Ambroise Vollard, the famed French art dealer who gave Picasso his first show in Paris in 1901, the exhibition will showcase the 100 prints that make up this celebrated edition. The etchings will be shown alongside works by Rembrandt and Goya that inspired Picasso during the making of the Vollard Suite, including Goya’s magnificent, rarely seen series of four Bulls of Bordeaux prints.

The dominant motif of the Vollard Suite is the sculptor in his studio, a theme that had biographical overtones for the artist. In 1932, Picasso established a sculpture workshop in the stables of the Château du Boisgeloup, about 45 miles northwest of Paris. Many of these etchings were inspired by the sculptures he completed at his country house between 1932 and 1934, which present an idealized image of Picasso’s studio life. The artist appears in the guise of a classical hero—bearded, nude, and crowned with an ivy wreath—often accompanied by a beautiful young girl who resembles Picasso’s lover, Marie-Thérèse Walter. In the etchings, they relax together and gaze at his recent sculptural creations, including a composite furniture-figure inspired by the surrealist assemblages of fellow Spanish artists Salvador Dalí and Joan Miró. 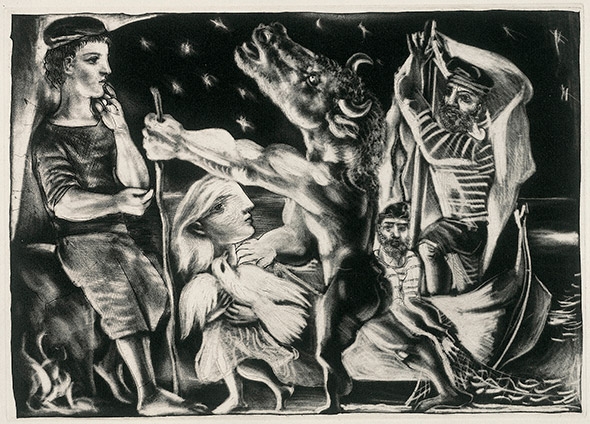 Another important theme is that of the Minotaur, the half-man, half-bull of Greek mythology. The remarkable images of the Minotaur in the Vollard Suite build upon Picasso’s earlier iconography of the bullfight to create a rich personal and political allegory. The four prints, representing a pitiful, sightless, and impotent Minotaur guided by a young girl holding flowers or a dove, are the most anguished and moving works in the Vollard Suite. Redolent of tragedy and suffering, they were informed by the darkening political situation in Europe during the 1930s, as well as Picasso’s fear of blindness, which haunted him from his earliest days as an artist.

The exhibition also includes the final and most important state (the seventh state of seven) of Picasso’s 1935 etching Minotauromachy, on loan from the Philadelphia Museum of Art. This has long been regarded as the most important of all his graphic works and arguably the greatest print made in the 20th century. In this remarkable work, Picasso portrayed the bison-headed creature as a helpless, blind figure being led by a young girl holding a candle. Picasso originally intended this print to be part of the Vollard Suite, but Ambroise Vollard determined that it was too large for the series.

To accompany “Picasso: The Vollard Suite,” the Hood is also presenting the exhibition “Cubism and Its Legacy.” In the first few decades of the 20th century, avant-garde artists sought to challenge traditional notions about pictorial representation by creating art that responded to the rapidly changing modern world that surrounded them. The most far-reaching and radical of these artistic movements was cubism, developed between 1908 and 1914 by Pablo Picasso and Georges Braque. Their artistic collaboration produced works that defied the Renaissance convention that painting should represent an illusionistic window into the world. Instead, cubism shattered preconceived notions about vision, asserted the flatness of the picture plane and the materiality of paint, and presented subjects from various perspectives and planes at the same time. “Cubism and Its Legacy” presents the vast range of work made possible by the redefinition of art that followed cubism, starting with some of the earliest experimental works by Picasso and Braque themselves.