Hooray for New Film and Media Studies FSP in Hollywood 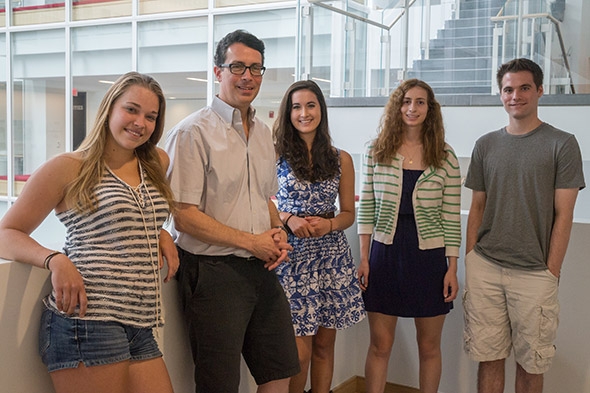 “Los Angeles is an ideal location for a Film and Media Studies FSP as it offers a wealth of opportunities for our students. It is a global and cosmopolitan nexus point of the media world, and has been the center of U.S. media production for over a century,” says L.A. FSP director Mark Williams, an associate professor in the department of film and media studies.

“There are also several notable schools in film and media studies in the L.A. area, and many of the premiere libraries, archives, and museums important to the study of film and media history. And it is home to a dynamic and supportive network of Dartmouth alumni and alumnae, who will be available for course visits, internship advice, and mentoring.”

“The L.A. FSP raises the profile of the department and provides students with an exciting opportunity to study in one of the media capitals of the world and to consider a career in the field,” says department Chair Jeffrey Ruoff, who led the summer 2013 Edinburgh Film and Media Studies FSP.

Dartmouth graduates have been making their marks in film and television for years.

The students, who signed up for the FSP during the 2013 spring term, will take three courses: Introduction to Media Industry Studies, a history course called Race and Place and Los Angeles Media, and an independent research project. The independent study component will enable students to perform original primary research under Williams’ guidance and to possibly secure an optional internship.

“We’re working with Career Services on campus and with DAEMA (Dartmouth Alumni in Entertainment & Media Association) members in L.A. to help the students pursue internships, should they choose to do so,” says Williams, adding that many students are still actively seeking internships. “And whether students participate in this FSP or not, we’d like to use this information to create a pool of internship possibilities for other students who are interested in this field.”

Kathryn H. Doughty, associate director of Dartmouth’s Career Services Office, calls the new program a “wonderful collaboration.” Over the years, Doughty says, she has been contacted by numerous alumni working in the film and television business who have been eager to mentor students and help them break into the business. “It’s great to have this formal partnership and to have DAEMA be involved. I’m thrilled that this FSP was created.”

The students are looking forward to “this pilgrimage to the center of the world’s film industry,” says Hannah O’Flynn ’15, a double major in film and media studies and studio art and a member of the Dartmouth track and field team and the Barbary Coast Jazz Ensemble.

A few of the students have worked in television news before—Spencer Janes ’15 interned on a nightly newsmagazine show at the PBS station in Springfield, Mass., and Amanda Young ’15 interned for the NBC affiliate in Cincinnati, Ohio. But this will be the first opportunity to study and work in L.A. for Janes and Young, who are active in Stories Growing Films, a student film production club that produces short films written and directed by Dartmouth students.

A double major in English and film and media studies, Janes hopes someday to “get involved with television production and writing, especially in primetime drama.” Young, agovernment major and film and media studies minor, who is a writer and editor for The Dartmouth and a James O. Freedman Presidential Scholar at Dartmouth’s Tiltfactor Laboratory, says the FSP will allow her “to continue to pursue my passion for film and television in Hollywood. I am excited to visit premiere libraries, archives, museums, and production sites, learn firsthand about the entertainment industry, and connect with alums in the field.”

The L.A. program will be Dartmouth’s second off-campus study program based exclusively in the U.S., joining the Department of Government’s program in Washington, D.C. The Department of Earth Sciences also conducts an off-campus program (known as the “Stretch”) that travels to various sites in the western United States and Canada. Nearly 60 percent of students take part in the 43 foreign study programs that Dartmouth offers in 24 countries.