Music Students Get a Chance to Wield the Conductor’s Baton

Professor of Music Melinda O’Neal acknowledged that her “Music 52” students had “a very tall order” for their final class project: They had a full orchestral score to learn and just two weeks in which to prepare to conduct 30 instrumentalists. 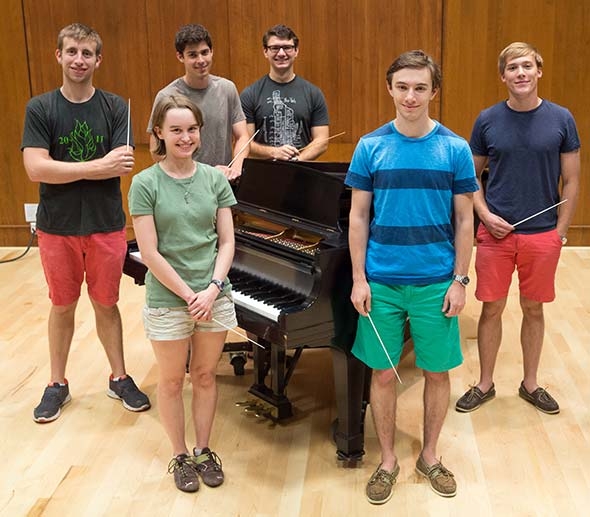 In the week leading up to the final day, each of the eight students conducted two pianists in four-hand arrangements of Schubert, Mozart, and Mendelssohn excerpts, imagining the orchestra layout and instrument timbres while in Faulkner Recital Hall. During these sessions, O’Neal frequently clapped to stop the music so that she could offer recommendations. Occasionally O’Neal, the conductor emerita for the Handel Choir of Baltimore, rose from her seat near the back row to demonstrate a gesture, providing visual guidance. She rarely doled out praise, but her directions were clear and sometimes as simple as reminding the students to check the tempo or to breathe.

“You need to set the salt on the table,” she said to one student, gesturing in a more subdued downward motion.

To another, whose nervousness was contributing to a stiff-armed conducting style, she gently advised, “Put the beat in the last three inches of the stick, not the arm.”

Following one of these “characteristically bumpy” first sessions, O’Neal said, “The students have one 10-week course in which we’ve tried to cover three courses—score preparation and interpretation, baton technique, and rehearsal procedures. And that takes years and years. They conduct vocal and instrumental music in class throughout the term. But conducting an orchestra at the end of the course is an extraordinary opportunity for the students. They know it, are grateful, and are working hard to meet the challenge.”

When the class gathered for their “final”—an orchestra rehearsal in Hartman Hall on August 17—the students were nervous but ready to conduct the nearly three-dozen musicians, including student, community, and professional players who assembled for the session. Chris Gallerani ’15, a theater major with a music minor, was the first to take the podium, conducting an excerpt from Schubert’s Symphony in C Major (D. 944), first movement. 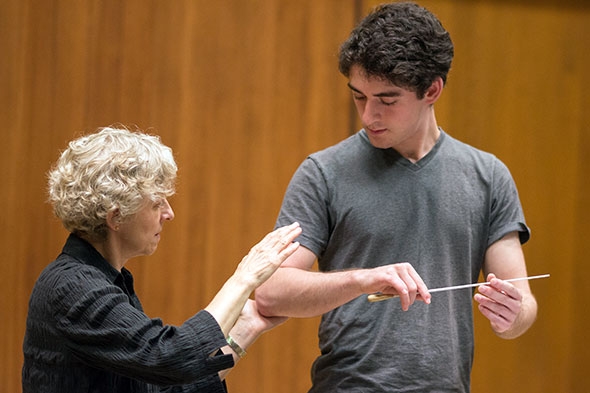 “It was my first time being in front of an ensemble of professional musicians, and also of people I hadn’t met before,” said Gallerani, who was an assistant director for his high school band. “I was pretty nervous, but overall I think my run through went well. My piece was written to be performed andante, which in traditional symphonic orchestras is often played at a relatively slow tempo. However, andante roughly translates from Italian as ‘walking pace,’ so the piece should move. My perception of a walking pace was faster than that of the orchestra’s, so at first I had some difficultly staying on top of the momentum.”

Kate Huffer ’15, a neuroscience major who plays oboe and English horn in the Dartmouth Wind Ensemble, said the final rehearsal “was incredible. I was totally blown away by the connection to the orchestra. The music didn’t sound like the neat lines on the staff; it felt like I was stirring a pot of soup with the baton. It was difficult to conduct what I wanted and not what they were doing, but when we clicked, we really clicked.”

Huffer was asked to take the conducting course as part of her new assistant drum major duties in the Dartmouth College Marching Band, in which she also plays cymbals.

Thomas Pears ’15, an economics major with a Spanish minor, also took the class in order to help him in an extracurricular activity.

“I’m in the Brovertones, an all-male a cappella group here,” said Pears. “I’m starting as music director in the fall, which requires me to lead rehearsals and conduct songs, so I took ‘Music 52’ to help prepare me for that.

“I think the most important thing I’ll take away from the course is that the conductor is not just going through the motions of conducting but actually empathizing with each member of the group because he is so familiar with every part of the score.”

O’Neal has been teaching a summer-term course in conducting at Dartmouth since 1980, and it’s known to be a demanding but rewarding class. O’Neal admitted that she’s “not lavish with compliments,” but said half-jokingly that she’d received no compliments during her tough doctoral training at Indiana University.

“Professor O’Neal is my favorite kind of professor,” said Huffer. “She is tough, but she has confidence in us. As busy Dartmouth students tend to do, I often give ‘good enough,’ but Professor O’Neal doesn’t accept ‘good enough’ because she knows it’s not ‘the best.’”

Gallerani added, “I found she guided me to always come to class prepared and eager to work on the podium. She always says that for the conductor, every time you stand at the podium, you’re performing.”

Note: Dartmouth students and community instrumentalists played in the orchestra session for “Music 52,” and the Shaw Fund, an endowed fund in the Department of Music, enabled O’Neal to hire professional musicians from Opera North.