Growing up the son of working class parents outside of Detoit, Professor Nick Reo says he didn’t envision a career in academia. In fact, he had little idea of what he wanted to do after high school. 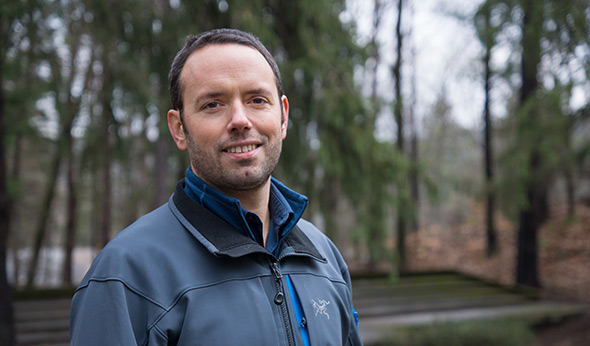 Nick Reo is one of the first Dartmouth professors to hold a joint appointment in Native American studies and the Environmental Studies Program. (Photo by Eli Burakian ’00)

“It was mow lawns, wash dishes, or go to school,” says Reo.

He chose the latter. After starting at two junior colleges, he couldn’t get enough. He went on to earn a bachelor’s and a master’s degree from the University of Michigan, and a PhD from Michigan State University.

“My wife likes to remind me that I’ve come from being a junior college student to an Ivy League professor,” Reo says with a smile.

A nontraditional route seems to suit the young assistant professor. Just last year, Reo became one of the first Dartmouth professors to hold a joint appointment in the Native American Studies Program and the Environmental Studies Program. With the dual appointment, it seems natural that one of the first papers he’s written at Dartmouth takes an interdisciplinary approach.

This summer, Reo teamed up with Native American Studies Professor Angela Parker to write “Re-thinking Colonialism to Prepare for the Impacts of Rapid Environmental Change,” which was published in the journal Climatic Change. The article was part of a special edition of the journal that focused on how climate change is affecting Native Americans.

“Angela and I had this thought that historians and environmental scientists should be working together more to study rapid social and environmental change,” says Reo. “We’re trying to crack open a door between the disciplines.”

The paper uses colonialism in New England as a case study to demonstrate how rapid environmental degradation can occur and to offer solutions to contemporary challenges. The study of environmental degradation, Reo says, can be approached through many lenses, including that of sociology, political science, anthropology, history, and other disciplines. Reo and Parker felt that by combining environmental studies research with historical analyses they could show the benefits of working across disciplines.

“Ecologists and environmental scientists benefit from seeing their conceptual frameworks populated with the complexities of historical examples,” the two write. “On the other hand, historians benefit from using the conceptual tools developed in ecology as a way to organize the analysis of complex historical information.”

While his research has helped build bridges across disciplines—in the classroom and in the lab—Reo has worked to connect across cultures, as well. He thinks it is crucial for Native people and others to learn from each other.

“So many Americans just really don’t understand what is going on on Indian reservations,” says Reo, who is Ojibwe. “And I think there is a hesitancy in trying to better understand each other.”

He hopes to give non-native students insight into contemporary tribes through his teaching and also by bringing Native and non-native students together to work on research. These efforts have benefited from open-minded and enthusiastic students, he says.

“Dartmouth students have been great,” he says. “They’ve been really engaged in our research and discussions, and willing to look at things from different perspectives.”

Reo is grateful to teach at a place where he can work in two departments. There’s just one downside.

“I want to be in both places at once,” Reo says, laughing.