Professor of Anthropology Deborah Nichols’ approach to education transcends the classroom. “For most students, college offers the first opportunity to take courses about archaeology,” she says. “For some, doing archaeology in the field will be a transformative experience,” says the anthropology professor. They learn to dig with trowels, toothbrushes, and lasers, while having a legitimate excuse to get dirty. 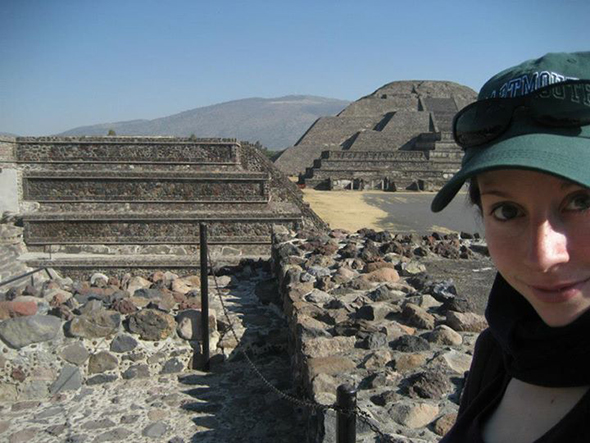 Rocio Labrador ’15 grew up in Madrid, where a love of things ancient came naturally.

“Like most Spanish children, I was inculcated with an admiration for the Roman Empire from the time I began to learn my numbers,” she says. “My parents also made a point of setting me loose in museums from a very early age.”

She developed the sense that “there was something important about reconstructing the life of people who were not able to leave a legacy.” Thus, it is no surprise that at Dartmouth, Labrador is double majoring in anthropology and classical archaeology.

“A classical studies course, ‘Alexander the Great and the Macedonian Kings,’ taught by Professor Paul Christesen during my freshman fall, sealed the deal for me,” she says. “I’ve been engrossed in ancient history and archaeology courses ever since.”

She devoted her winter term to fieldwork in Mexico, spent her spring on the Classical Studies Foreign Study Program (FSP) in Greece with Christesen, and will be attending the department’s FSP in Rome this coming fall. 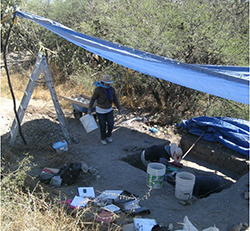 Archaeologists excavate an Aztec altar at the base of an open chapel within the archaeological zone of Tula. Rocio Labrador is deep in the pit. (Photo by Rocio Labrador ’15)

“Once it became evident that there was a very real possibility that I would pursue archaeology as a career, my next step was clear,” she says. “Graduate archaeology programs always encourage and often require fieldwork experience, if only to ensure that the students they accept know what they are signing up to do.

“Any archaeologist will tell you that you cannot hope to read remains unless you have learned how to excavate them. However, archaeology is a process of destruction, and you can only excavate a site once. Once excavated, the archaeological record is accessible to future scholars only through its documentation.”

When Labrador arrived in Mexico, permits for her initial dig had not yet been approved, so she signed on with a group that had just wrapped up the digging of a hillock near Tula, the ancient Toltec capitol. She helped analyze the findings of the season, a time-consuming and exacting task. “I spent one month with that team analyzing pottery, stone artifacts, skeletal remains, carbon, and different types of soil,” she says.

However, she was eager to get her hands dirty and do some actual digging. She joined a team working in the Tollan archaeological zone, excavating colonial, Aztec, and Toltec remains. “I was given my own pit to dig and, under the instruction of the director, I picked up a trowel and learned to dig, map, and record my findings,” says Labrador, who has clearly found her calling. “This was just like playing in the mud, only with a purpose.”