Scientists Identify an Off Switch for Bad Habits

What if the brain had a light switch that could be flipped to turn off a bad habit?

Research by Assistant Professor Kyle Smith, who joined the faculty of Dartmouth’s Department of Psychological and Brain Sciences last month, has found just that in lab rats. Smith and others have identified brain cells involved in habit formation and inhibition. Researchers introduced DNA for photosensitive molecules into the brain’s cortex to make specific neurons respond to light from a fiber optic implant. Then, by flashing a light on these key cells, researchers managed to abruptly halt habits and inhibit the formation of new habitual behaviors. 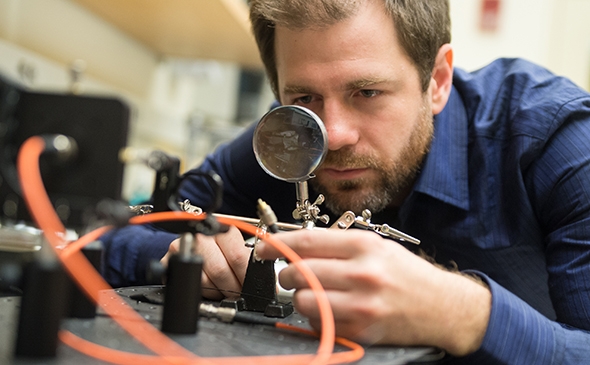 Smith and his colleagues trained rats to run a maze for a reward. They then overtrained the animals so they ran the pattern even after the behavior brought negative results—in this case, food that tasted bad. So the rats continued the habit, in a sense, against their better judgment. It is not unlike a person continuing to bite his fingernails even though he wants to stop, Smith says.

They then flashed the light on the target neurons, and the rats immediately abandoned the now negative maze pattern and behaved like rats purposefully searching for a positive reward. Smith published the results with his former postdoctoral adviser, Professor Ann Graybiel of the Massachusetts Institute of Technology, in the June 27 issue of the journal Neuron, and in 2012 in the journal Proceedings of the National Academy of Sciences.

The study also found that flashing the light on the target cells within the brain’s infralimbic cortex during overtraining prevented habitual behavior from forming in the first place.

Smith will continue the work in his new lab at Dartmouth with an eye toward how this data might apply to humans. 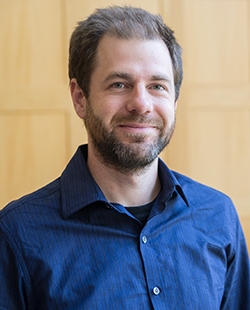 “The questions we are asking are, ‘What are the roles of these processes in states of excessive motivation and behavior, like addiction and obsessive compulsive disorder? What are the brain mechanisms of compulsive or ritualistic actions, as in autism and Tourette syndrome?’ ” Smith says.

Smith, whose PhD dissertation from the University of Michigan looked at how the brain’s limbic system makes rewards like sugar pleasurable and desirable, is broadly focused on identifying the brain mechanisms of reward and action and how motivation, learning, and action interact to make habits.

“Right now, I am setting up my lab to do all of this stuff,” Smith says. “I am eager to return to some work that was started in graduate school on reward. Perhaps we can use the same approaches to make sensory experiences like foods better or worse, or more or less desired, to get a grip on how those brain systems work.”

This fall, Smith will have two undergraduates from the Presidential Scholars program to help him, along with a graduate student in the PhD program and one post-doctoral researcher. “They are a great group of people with big ambitions,” he says. “We’ll hit the ground running.”