Professor of Anthropology Deborah Nichols’ approach to education transcends the classroom. “For most students, college offers the first opportunity to take courses about archaeology,” she says. “For some, doing archaeology in the field will be a transformative experience. They learn to dig with trowels, toothbrushes, and lasers while having a legitimate excuse to get dirty.” 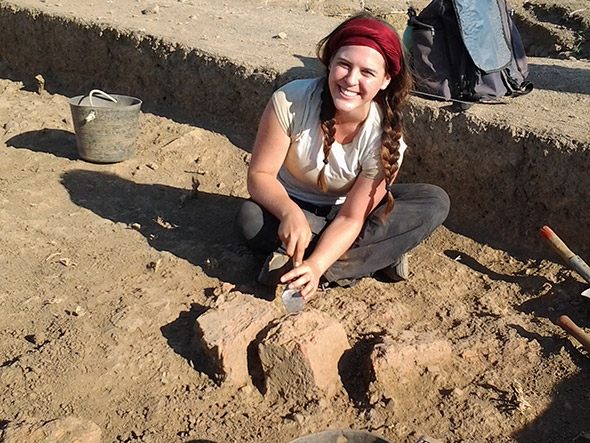 Her first taste of archaeology came from a National Geographic article on Peru. By the time Genevieve Mifflin ’14 of Greenwich, Conn., had reached the tenth grade, she’d decided to major in anthropology in college.

“I must have been a senior in high school when I thought how amazing it must be to unveil cultures lost to time,” Mifflin says. “There was something about the mystery and intrigue of discovery that captivated me.”

That early commitment to studies of the ancients took Mifflin to an archaeological dig this summer at the site of Zincirli Höyük in southern Turkey, where she spent five weeks working with Dartmouth professors Virginia and Jason Herrmann.

There were about 50 people working on the dig, from 12 universities in 11 countries. “I really enjoyed hearing everyone’s life stories, how they got involved in the dig, how they decided to do archaeology, and where their paths may take them in the future,” says Mifflin.

She says the site was first occupied in the Early Bronze Age (2500-2000 B.C.) and inhabited through the Iron Age (900-600 B.C.). In its later years, it appears to have been a large, circular city—the capital of a small kingdom—and was eventually conquered by the Assyrians, becoming the capital of an imperial province. 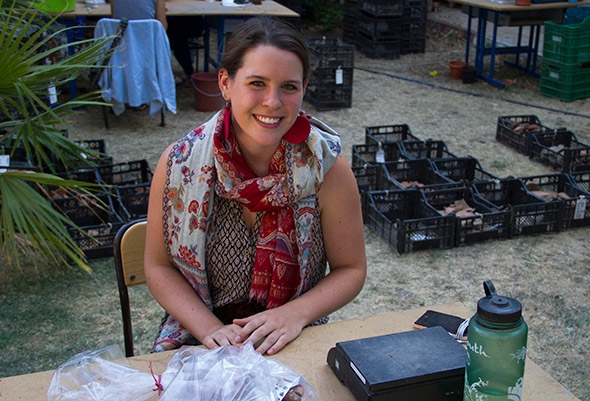 “At the location I am digging, we are primarily excavating architecture, such as the stone wall foundations and cobble pavements of a large Iron Age Assyrian administrative building,” Mifflin says, emailing from the dig. Other finds include large preserved mud bricks, pottery, flint, some charcoal, an iron arrowhead, and a bronze pin.

The goal of the work in this part of the site is to track changes in the use and organization of the residential area of the city, especially between the earlier Iron Age period of local rule and the later Assyrian imperial period, she explains.

“The expedition to Zincirli draws undergraduate student volunteers like Genevieve from around the world with the University of Chicago, Harvard, Oxford, Cambridge, Freie Universität Berlin, and Bilkent University (Turkey) normally represented,” says Jason Herrmann, Neukom Fellow in the Department of Anthropology. “Genevieve was great and we hope to draw more students like her and inspire a wider interest at Dartmouth in the archaeology of the Near East.”

“We were very pleased to have Dartmouth represented in the excavations at Zincirli this year and to give Genevieve her first taste of archaeological fieldwork,” adds Virginia Herrmann, visiting assistant professor in the Department of Anthropology. “She helped us not only in the field with excavation and recording, but also in sorting the finds, and she stayed cheerful and energetic even when the work got hot and tedious.”

Among Mifflin’s discoveries was an archaeologist’s need for patience. “You are constantly asking questions, trying to find the answers, but also accepting that sometimes we do not have the answers, at least not yet,” Mifflin says. “Some of the questions you may even have to wait years to answer.”

But this has not dampened her enthusiasm. “It is amazing to see the sorts of things you can find beneath the earth,” Mifflin says. “I think that discovery is fascinating and it is great to engage in the process of trying to figure out what a particular feature or object could represent.”