Neuroscience plays a starring role in a two-part series Brains on Trial With Alan Alda, airing on PBS Wednesday, September 11, and Wednesday, September 18, from 10 to 11 p.m., a project that Dartmouth Professor Thalia Wheatley, an expert in brain science and social intelligence, worked on as a consultant. 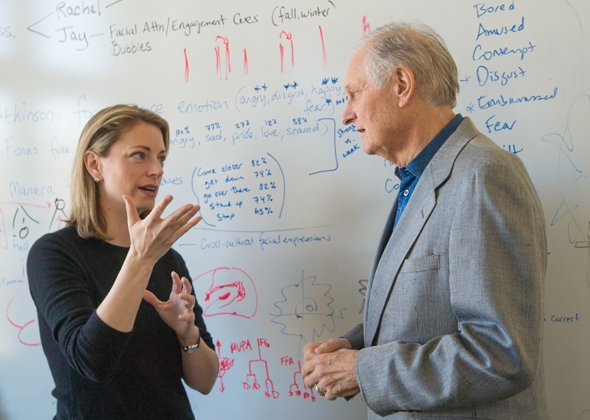 Professor Thalia Wheatley discusses her research with actor Alan Alda during his visit to campus in April 2012. (Photo by Eli Burakian ’00)

Brains on Trial centers on the trial of a fictional crime: a robbery staged in a convenience store. A teenager stands accused of the attempted murder of the store clerk’s wife, who was shot during the crime. While the crime is fictional, the trial is conducted before a real federal judge and argued by real practicing attorneys.

As the trial unfolds, Alda visits with neuroscientists whose research has already influenced some U.S. Supreme Court decisions, as well as Duke University law professor Nita Farahany, a member of the Presidential Commission for the Study of Bioethical Issues. On these visits, neuroscientists show how functional MRIs and other brain-scanning techniques are exploring lie detection, facial recognition, memory decoding, racial bias, brain maturity, intention, and even emotions.

The research Alda discovers is at the center of a controversy about how this rapidly expanding ability to peer into people’s minds and decode their thoughts and feelings could—or should—affect trials like the one presented in the program.

Alda and his film crew visited Wheatley, an assistant professor of psychological and brain sciences, in her lab in April 2012, and participated in an experiment on free will, as part of the research for the program. Although the segment did not make it into the show, Wheatley is featured on the Brains on Trial program website under “The Experts.” The page features information about the 29 scientists and academics who contributed to the program, with the introduction, “Alan interviewed some of the greatest minds in law and science to discuss implications of neuroscience entering the courtroom.”

After their April meeting, Wheatley said, “It was an amazing experience for me to meet Alan Alda and share our research at Dartmouth. I think most people know Alan as a famous actor and playwright, but he is also this incredible ambassador for science.”

Wheatley’s research focuses, in part, on free will and how an action may be determined by brain activity before a person is aware of wanting to act. In addition, she has investigated how people understand and react to other human beings and how the brain evolved to handle the computations underlying this social intelligence.

Perhaps best known for his TV work in M*A*S*H* and West Wing, Alda has had a lifelong interest in science. He hosted PBS’s Scientific American Frontiers from 1993 to 2005. He founded the Alan Alda Center for Communicating Science, and has led workshops to help scientists learn to communicate more directly and effectively.

In fact, Alda will return to the Dartmouth campus on October 10 and 11 as a Montgomery Fellow to share his thoughts on getting the message of science out to a wider audience. The details of his October 10 presentation are still being ironed out, but it will focus on Alda’s passion for “communicating science.”