In 1988, the Women’s Resource Center was founded at Dartmouth. It later became the Center for Women and Gender, and this year was again renamed. It is now the Center for Gender and Student Engagement (CGSE). As it celebrates its 25th anniversary this fall, the changes in name reflect the changes the center has undergone.

“I think the name changes show how the discussion has evolved,” says Michelle Hector, assistant director for CGSE. “We are constantly trying to expand the conversation on gender.”

“The approach we want to take is for everyone on campus to be active with gender issues,” says Kyle Ashlee, director of CGSE. 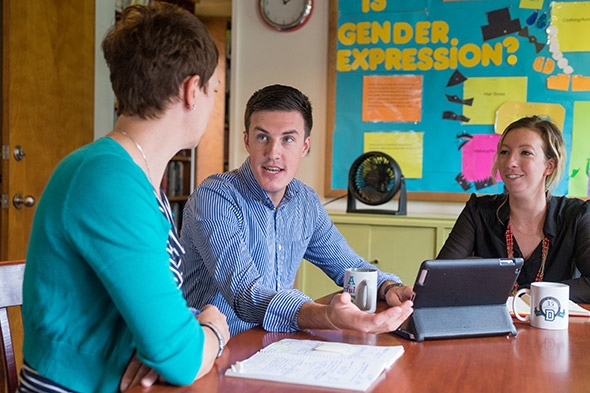 When it comes to gender issues on college campuses, Ashlee says, many people immediately think of the issue of sexual assault against women. While addressing the issue is of vital concern, he says, that is only one part of the center’s mission.

In addition, the CGSE strives to enrich the student experience through programming, including the annual V-Week events, supporting gender-neutral spaces, and facilitating mentorships between women through Link Up.

The CGSE has also emphasized the need to bring men into conversations about gender. This summer, the center brought author and sociologist Michael Kimmel to campus to talk about the limitations of traditional masculinity. In the fall, CGSE will enlist men in the fight against violence and sexual assault through the White Ribbon Campaign.

Another focus of the center is to create comfortable settings for conversations about gender issues. One of those spaces is the CGSE office, located in the Choate Cluster, which has a kitchen and a lounge. Though the CGSE office is tucked away from campus, the CGSE staff hopes that students will see the office as a safe space to retreat, Ashlee says.

“We want this to be a place where students can get away and relax,” he says. “We’re really focusing on the student experience.”

“The CGSE has been an integral part of my Dartmouth experience,” says Llopiz, who has also interned for CGSE. “It has allowed me to satisfy my intellectual curiosity, but also be part of a group of people that sees gender equality as a framework of social justice.”

In recognition of the 25th anniversary, both Ashlee and Hector say it has been fascinating to look back and see how much the center has changed since its origins. Nevertheless, they are mostly looking ahead.

“This is important work,” says Ashlee. “Everyone should care about gender.”

The CGSE will celebrate its 25th anniversary from 1 to 4 p.m. September 14 on the patio of the Collis Center.