‘The Core of Civilization’: Inauguration Panel Reflects on the Liberal Arts

Annette Gordon-Reed ’81, a Dartmouth Trustee, Pulitzer-Prize winning author, and Harvard professor, admits she is sometimes perplexed by the national debate over the value of a liberal arts education.

Moderated by Dean of the Faculty Michael Mastanduno (far left), five panelists discussed the value and future of the liberal arts on the eve of Inauguration. (Photo by Eli Burakian ’00)

“It struck me as odd that we have to make a case. The liberal arts are the core of civilization,” she said during the September 19 panel discussion, “The Liberal Arts at Dartmouth: What Lies Ahead?”

Hosted by President Phil Hanlon ’77, the discussion was the first in two days of events celebrating Hanlon’s inauguration as the 18th Dartmouth president in the Wheelock Succession.

Michael Mastanduno, dean of the Faculty of Arts & Sciences and the panel’s moderator, said Hanlon inspired the topic when asked how he wanted to mark the beginning of his presidency.

“He said he wanted a reflective discussion of the liberal arts,” said Mastanduno.

In addition to Gordon-Reed, the panelists were Stephon Alexander, a theoretical physicist and the Ernest Everett Just 1907 Professor; Associate Professor of History Leslie Butler, whose work centers on 19th-century American cultural and intellectual history; Donald Pease, the Ted and Helen Geisel Third Century Professor in the Humanities and President Hanlon’s former English professor; and Joseph Helble, dean of Thayer School of Engineering and a professor who works on issues of the environmental impacts of fossil energy.

“The liberal arts are as important as they’ve ever been,” said President Hanlon at the Inauguration panel. (Photo by Eli Burakian ’00)

Mastanduno tossed unscripted questions at the panelists that challenged the ideals of a liberal arts education. In Helble’s case, he jokingly asked why a dean of a professional school should even be on the panel.

Helble said that the liberal arts create the context for engineering problems, and that the curriculum helps future engineers understand how to ask broader questions and develop critical thinking.

He went on to argue that the discipline of engineering must inform the liberal arts as our world and technology become inseparable. Technology is integral to every aspect of modern life, he said, and an understanding of the “built environment” would be “hugely enriching, regardless of discipline.”

For Alexander, the liberal arts entail “serious engagement with students.” He spoke about how, when he brings Dartmouth undergraduate and graduate students to learn together, the exchange enriches the work of both.

Only in the liberal arts environment can this kind of exchange readily occur and, Alexander said, the curiosity and open-mindedness of undergraduates is liberating. “It brings research to another level.”

A question sent via email to the panel was whether the cost of higher education would delegate the liberal arts into an exclusive and elite pursuit.

Butler offered the historical perspective of Gilded Age criticism of liberal arts as useless in a time that needed industrialists and captains of industry. It was against this backdrop that the great reforms of the late 19th- and early 20th-centuries conceived the democratization of higher education as the foundation of an informed and active citizenry. The comparison with the present is not difficult to make, she said, and the importance of the liberal arts mission is no less central.

Pease carried the thread with a rhetorical elegy to the “liberating arts,” as John Sloan Dickey, Dartmouth’s president from 1945 to 1970, often called the pursuit. He said that learning “the art of listening, the art of patiently deliberating—not turning it into a Twitter line, but patiently deliberating,” over great works of art and literature remains central to the educational mission.

At the close of the session, Mastanduno invited President Hanlon to share his own perspective.

Hanlon stated that he believes higher education is entering another great era of change. Despite that, he said, “There is no debate in my mind. The liberal arts are as important as they’ve ever been.” 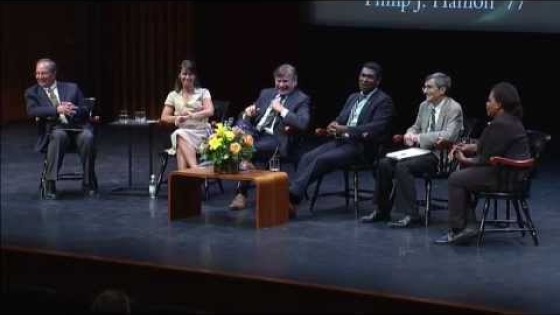 The Inauguration ceremony will take place on Friday, September 20, beginning at 3 p.m. on the Green.