When Dartmouth’s All-American lacrosse player Andrew Goldstein ’05 came out to his teammates after the 2003 season, it made national news. Described by ESPN as “the first American team sport athlete to come out while still playing,” Goldstein found strength during that time from the Dartmouth community.

“I received support from everyone—not just from then-President Jim Wright, then-Athletic Director Josie Harper and the lacrosse coaching staff, but from the community at large,” he says.

So when Goldstein got involved with the national “You Can Play” project, which aims to eradicate homophobia from sports, he knew he wanted Dartmouth to participate in the organization’s video testimonial project. 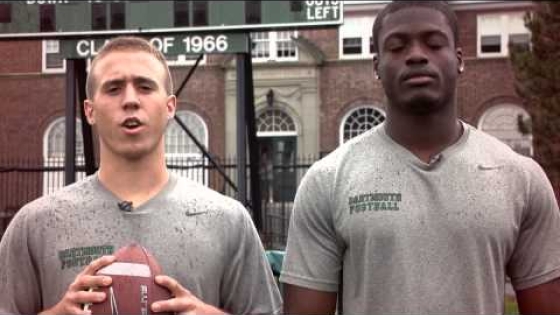 “Given the role that Dartmouth has played in accepting and supporting me and other openly gay athletes over the past decade, I thought it would mean a lot to see Dartmouth athletes and administrators proclaim on video what they have already been practicing,” says Goldstein, a research scientist at UCLA who earned a Ph.D. in molecular biology while also playing professional lacrosse.

Several professional athletes and teams had already made videos, using the organization’s slogan, “If you can play, you can play.” Among the first was NHL player Tanner Glass ’07, who told the Winnipeg Sun in March 2012 that Goldstein inspired him to get involved. When Goldstein came out, “that brought it to the forefront of my experience,” said Glass, who plays for the Pittsburgh Penguins. “No one should be afraid to come out and be themselves and be accepted in sports.”

After putting a script together, Anne Hudak then enlisted input from undergraduates on the Student-Athlete Advisory Committee (SAAC). They agreed with the Hudaks that they wanted Dartmouth’s message to go beyond addressing homophobia.

“The ‘You Can Play’ message is very important so that LGBT athletes feel safe and comfortable,” says Anne Hudak, who is now the assistant dean of undergraduate students. “But to me, being part of a team is also knowing who your teammates are. One of the things Mark and I discussed is that we always say ‘the color of your skin and your religion doesn’t matter.’ But it does matter because it’s part of who you are. And we wanted to get that across.”

Dartmouth Athletic Director Harry Sheehy, who appears twice in the video, is pleased that both current and former Dartmouth student-athletes are taking a stand against prejudice and intolerance. “We’re very proud of the role that former Dartmouth athletes like Andrew Goldstein and Tanner Glass have played in raising the visibility of this issue, and this video gives our current student-athletes and staff a chance to voice our own strong support,” he says.

“As we watched the other videos and got to thinking about it, there are so many things student-athletes deal with,” says Mark Hudak. “Some of it is sexual orientation, but there are also eating disorders, race, and religion, the list goes on and on. We didn’t want to limit it to one thing.”

Student-athletes, coaches, and administrators quickly volunteered to appear in the video, speaking lines such as, “The color of your skin does matter. Your sexual orientation does matter. Your religious faith does matter, and so does your ethnicity. They all matter to me because you’re on my team.”

Football wide receiver Jordan F. Aré ’15 appears first in the video. The government major says he participated because, “I want people to know that Dartmouth’s athletic community is full of many diverse individuals who are not only very passionate about their sport, but about the well-being of the Dartmouth community and on-campus experiences. Being an athlete is not our only identity. We are individuals who care about issues of equality and humanity, and want to see healthy relationships and interactions manifest within the Dartmouth community.”

Volleyball player Lucia G. Pohlman ’15, who is majoring in environmental studies, participated because she feels it’s important “to spread a message to all current and prospective students that they will be welcome at Dartmouth and on Dartmouth’s athletic teams regardless of sexual orientation or identification.”

SAAC member Rex Woodbury ’15, a distance runner on the track and field team, was also instrumental in the video. “We want people to know that Dartmouth and particularly the Athletics Department—a place where sexism and homophobia are traditionally found on most campuses—is an accepting place where students should feel comfortable and proud of their gender, race, and sexual orientation. Hopefully this will help us build a stronger community and allow our students and student-athletes to be happy and successful.”