Gordon Gribble was given a chemistry set at age 10, and he was hooked for life. “I knew then I wanted to be some kind of chemist,” he says. Today, the San Francisco native champions the battle against “chemophobia,” which he defines as an exaggerated and irrational fear of chemicals. This is the topic of his March 2013 paper published in the journal Food Security. 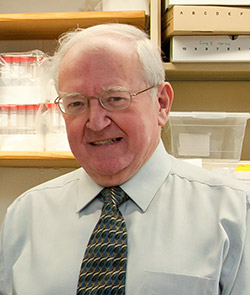 A faculty member for more than 45 years, Gribble is now The Dartmouth Professor of Chemistry, an endowed chair to which he was named in 2005.

He took a turn toward environmental organic chemistry after learning of a U.S Army program for deep-ocean disposal in 1970 of rockets leaking sarin nerve gas—a chemical weapon prominent in the news today, which was also discovered in Nazi Germany in 1938. “This got me interested in chemical warfare and in other toxic materials we typically encounter in our environment, including pesticides, herbicides and carcinogens,” he says.

While Gribble acknowledges the potential danger inherent in all chemicals, he characterizes the public perception of them as an overreaction. “Just the word ‘chemical’ evokes fear in the public,” he says.

He often cites a basic principle of toxicology— “the dose makes the poison.” This was first expressed by Paracelsus, a 16th-century German-Swiss Renaissance physician who is regarded as the founder of the discipline of toxicology.

Gribble points out that even the most innocuous substances can be toxic at extreme dosages. In his paper, Gribble cites examples of fatal water consumption (not involving drowning). One was in 2005 at Chico State University in California, where a fraternity hazing forced pledges to drink up to five gallons of water. “The ‘winning’ pledge drank six gallons in less than four hours and died,” Gribble writes.  “Conversely, even the most toxic chemicals have a threshold level below which no toxicity is observed.”

The chemophobic alarm was raised in 1962 with Rachel Carson’s book Silent Spring, which focused attention on pesticides such as DDT. The 1971 dioxin scare in Times Beach, Mo., followed by the discovery of toxic wastes at Love Canal, N.Y., added fuel to the fire. Then, in 1984, a release of methyl isocyanate gas in Bhopal, India, caused thousands of deaths and injuries.

These events set the stage for today’s pervasive chemophobia, according to Gribble, but now he sees the focus being on daily chemical exposures, specifically in foods. Gribble argues that the low doses of chemicals in food, whether the chemicals are natural or synthetic, are typically harmless and often highly beneficial. He says most people don’t know that they are routinely exposed to a host of compounds in nontoxic concentrations in what they eat and drink each day.

“Today’s pesticides are nontoxic to mammals in the amounts applied in agriculture, even if the residues are in food,” Gribble asserts. He says that the risk of getting sick is greater from eating food that might have been grown organically, and fertilized with manure, “which if not sanitized can be loaded with harmful bacteria.”

“Regulatory authorities should focus not on pesticides, antibiotics and dioxins,” he says, “but rather on pathogens, bacteria and fungi, which cause millions of cases of food-borne infections that result in hospitalization or death each year.” He cites recent cases of E. coli found in spinach, lettuce, and beef, and Listeria in celery, hot dogs, cheese, and cantaloupe. “Trace chemicals in food cannot reproduce and multiply, but germs can,” says Gribble.

“It is of vital importance for the welfare of the current world’s population—and the unborn billions to come—that a safe and abundant food supply is available,” says Gribble.