E.E. Just Symposium to Highlight Science of the Future

The 2013 E.E. Just Symposium is set to be a reprise of last year’s star-studded premiere event, though not precisely a repeat performance. “This year it takes a new tack evident in its theme, ‘Exploring the Future of STEM’,” says symposium organizer and Dartmouth theoretical physicist Stephon Alexander, the E.E. Just 1907 Professor of Natural Sciences. 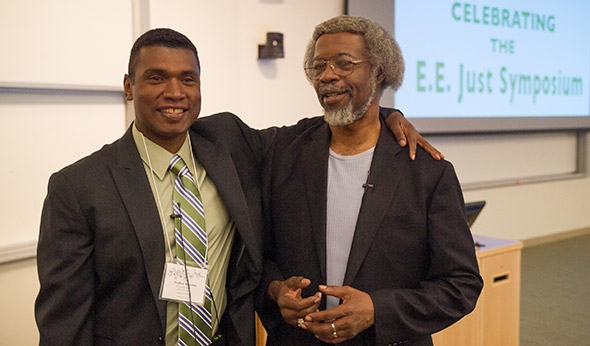 “The symposium is a Dartmouth initiative to bolster student interest in the STEM fields of science, technology, engineering, and mathematics, addressing some of the shortcomings in the American educational portfolio,” says Alexander.

A 2012 report published by Harvard University on the performance of students worldwide ranked the U.S. at 25th in math, 17th in science, and 14th in reading. Given these statistics, policy makers and educators are seeking new ways to increase the proficiency of American students with an emphasis on STEM education.

“We are focusing on STEM education in a conference that is both interdisciplinary and future-thinking,” Alexander says. “It brings together a group of world-renowned scientists, technologists, Dartmouth students, faculty, and alumni to engage in discussions and collaboration on topics at the frontiers of interdisciplinary science.”

Presentations will cover subjects that range from archaeological exploration using remote-sensing technologies to the neuroscience of music, and include developments in astrophysics, medicine, computer science, and Zen meditation.

“Interesting and exciting speakers will offer a taste of the future-thinking that characterizes the frontiers of scientific research today as well as the interface of science and the humanities,” says Alexander. “In providing this strange mix of subjects and speakers, I hope we can attract more student participation at this year’s conference, which could lead to increase student engagement in the STEM fields.”

Dartmouth President Philip J. Hanlon ’77 will open the symposium which begins at 6 p.m. on Friday, October 4, in the Arvo Oopik Auditorium, Class of 1978 Life Sciences Center. Noted string theorist and PBS television personality Jim Gates (Sylvester James Gates Jr.) will give the keynote address, focusing on the pursuit of a unified field theory that accounts for all forces in the universe, a subject first broached by Einstein.

Gates is the John S. Toll Professor of Physics at the University of Maryland (UMD), Director of the UMD Center for String and Particle Theory, and a member of President Obama’s Council of Advisors on Science and Technology.

The seven speakers on Saturday, October 5, will begin their presentations at 9 a.m. in Wilder Hall 104, and the day will conclude with a panel discussion— “The Future of STEM in the Academy”—with symposium speakers and Dartmouth faculty members. A full roster of the speakers, including times, places, and background biographies, is available on the E.E. Just Symposium website.

The symposium celebrates the spirit of scientific courage and interdisciplinary research of Ernest Everett Just, Class of 1907, a pioneering cellular biologist and one of the Dartmouth’s earliest African American graduates. “Dealing with the barriers of prejudice and discrimination, Just demonstrated vision and courage as he strived to advance his science,” says Alexander.