Good to Know: Tips and Inspiration for the Class of 2017

Six faculty members from a variety of disciplines, backgrounds, and undergraduate institutions talk with Dartmouth Now about their college journeys. They also offer advice—some of it surprising—for the Class of 2017. 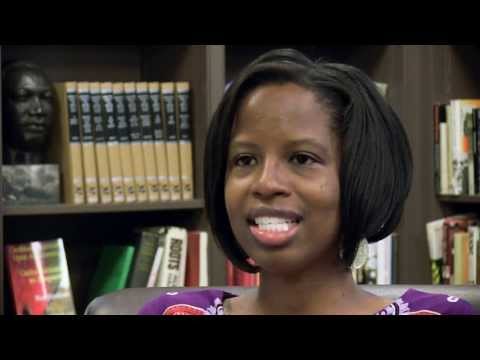 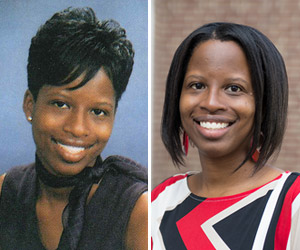 “I was completely overwhelmed,” says Professor Reena Goldthree about arriving at college. “But I was determined to not let that show.” (Photo at left, courtesy of Reena Goldthree; at right, by Eli Burakian ’00)

For St. Louis native Reena Goldthree, enrolling at Columbia meant moving across the country to a city where she knew no one.

“I vividly remember my mother driving this U-Haul truck into Manhattan during rush hour traffic,” says Goldthree. “I remember looking at the New York skyline and thinking that the city never ends. I was completely overwhelmed, but I was determined to not let that show.”

When asked whether she thought back then that she would go into academia, Goldthree laughs. “Absolutely not,” says the history and sociology major. “I had this dream of having two careers—starting as a civil rights lawyer and then eventually becoming a diplomat.”

After her first year, she received a Mellon Mays Undergraduate Fellowship, which provides support to students who plan to pursue doctorate degrees. She was accepted into a history PhD program at Duke University. “I thought, OK, maybe academia is a possibility.”

Goldthree turned that possibility into a reality when she became an assistant professor at Dartmouth in 2011.

Here are some tips for the Class of 2017 from Goldthree: 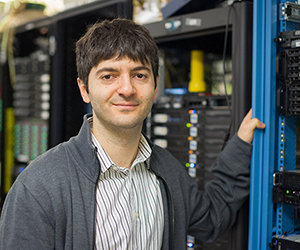 “Only you know what works best for you and how you should manage your time,” says Professor Gevorg Grigoryan. (Photo by Eli Burakian ’00)

Gevorg Grigoryan had just moved to the United States from Armenia when he enrolled at UMBC, and everything—the language, culture, and curriculum—was unfamiliar. Everything but his research partner. “I actually worked in a lab with my Dad,” Grigoryan says. His father was a researcher at UMBC.

For many students, adjusting to college life is difficult. But Grigoryan was adjusting not only to college life, but to a new country. Understanding lectures was doubly hard because English was his third language. He enrolled in a calculus course, a topic which he had already taken and mastered in secondary school, to help improve his language skills.

Initially, Grigoryan was determined to become a physicist, like his father. But then he became interested in biology, and eventually computational biology. Now, Grigoryan, who won a Sloan Fellowship this year, works to understand protein structure and to create proteins to perform useful tasks, such as fighting disease molecules.

Grigoryan went on to earn a PhD from MIT. He has come a long way from his first year at UMBC. “I guess my college experience was pretty unorthodox—moving to the U.S., working with my dad, having a language barrier,” says Grigoryan. “But everyone has a different experience. Make it your own.”

Here are some tips for the Class of 2017 from Grigoryan: 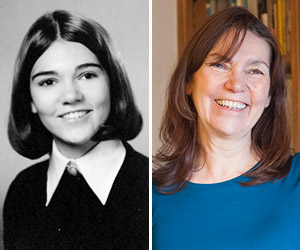 When asked how she decided on a college, Dartmouth Professor Cynthia Huntington leans closer and whispers. “Do you want the true story?” she says with a smile.

Sitting on a couch in the bright, airy lobby of Baker-Berry Library, Huntington pauses. “It was the only place I could get in.”

Huntington, New Hampshire’s Poet Laureate in 2004 and 2005, has taught at Dartmouth since 1988. Last fall, the professor of English and creative writing was a finalist for the National Book Award for her poetry book Heavenly Bodies.

When Huntington arrived on campus in East Lansing, Mich., after a five-hour drive northwest from her hometown of Meadville, Penn., she became the first in her family to go to college. While she had struggled academically in high school, college offered a clean slate.

“I was excited because it was a fresh start,” she says. “Once I got to college I really did well, but I was a late bloomer. That hunger for learning didn’t hit me until I got there.”

While on campus, she took a wide variety of courses—“I wanted to absorb as much as I could,” she says. While majoring in interdisciplinary arts and humanities, Huntington worked as a cocktail waitress. She had little idea what she wanted to pursue as a career. By her senior year, she was married.

“For all my enthusiasm for college,” she says, “I didn’t go at it with a plan. After college was when I got serious about being a writer.”

And that’s something she’s been serious about ever since.

Here are some tips for the Class of 2017 from Huntington: 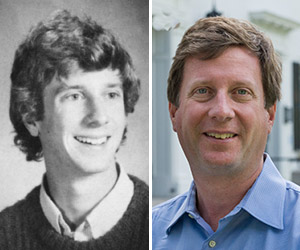 “Dartmouth offers the rare opportunity to learn from a world expert, no matter what the department,” says Professor F. Jon Kull ’88. (Photo at left, courtesy of Rauner Library; at right, by Eli Burakian ’00)

“I remember visiting Dartmouth,” says Kull, who grew up in rural Pennsylvania. “I don’t think I even went on a campus tour. But I walked through Baker-Berry Library and that was it—my decision was made. It seemed like such a great place.”

“Dartmouth offers the rare opportunity to learn from a world expert, no matter what the department,” says Kull. “After college, it is going to be either very difficult or hugely expensive to have that kind of access to an expert.”

Kull himself has become one of those experts. In fact, Kull knew what he wanted to do professionally soon after arriving on campus in 1985. “Honestly,” he says, “I knew I wanted to come back to Dartmouth and become a professor. “I thought, what a cool place—where you have such great teachers who are doing fascinating research.”

Here are some tips for the Class of 2017 from Kull: 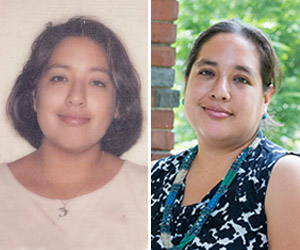 Professor Angela Parker tells students to take courses from a variety of departments. “You never know what will spark your interests,” she says. (Photo at left, courtesy of Angela Parker; at right, by Eli Burakian ’00)

Before Angela Parker participated in the Dartmouth Native Fly-In Program for high school students, she considered several colleges. By the time she was flying home to her high school in Minneapolis, her decision was made.

“I left Dartmouth thinking, I’m going there,” she says.

But her older sister, a student at Stanford University, persuaded Parker to give the California school a closer look. “I didn’t really know what I was doing,” she says with a laugh. Her sister helped talk her into Stanford.

Originally from the Fort Berthold Indian Reservation in North Dakota, Parker was hundreds of miles away from her family, but having her sister there made for a smooth transition. She was also grateful to be learning from renowned scholars.

“I remember the first time I got to campus,” Parker says, “I just remember walking around campus and feeling so lucky to go to college there.”

As an undergraduate, Parker wanted to be a high school teacher. But one of her teaching assistants encouraged her to think about graduate school, and told her that that she might like teaching at the college level. Parker would go on to earn a PhD from the University of Michigan before joining Dartmouth’s faculty.

Parker says she is glad to be at an institution that emphasizes undergraduate education. “You come to teach at Dartmouth because you believe in the undergraduate experience,” she says.

Here are some tips for the Class of 2017 from Parker: 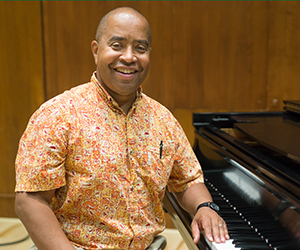 “Don’t worry about being employable. If you graduate from Dartmouth, you will be employable,” says Professor Steve Swayne. (Photo by Eli Burakian ’00)

Steve Swayne
Professor of music and chair of the Department of Music
Alma Mater: Occidental College

Sitting in Steve Swayne’s Hopkins Center office, with its floor-to-ceiling shelves stacked high with CDs and books, it is hard to imagine Swayne in a career other than music.

When he started at Occidental College, however, the Southern California native had other ideas. Even though he had received a small scholarship for his piano playing, Swayne thought he would major in computer science. “It seemed to be a burgeoning field then, and I was decently skilled in math and logic,” he says.

His first-year adviser talked him into taking a music course. “I don’t know if he saw some talent in me, or he was just trying to fill the class,” Swayne says with a smile.

So he took a course on orchestration. And then another one on harmony. The same skills that would have made him a good computer scientist helped him in music. “I studied music because I was good at it. It seemed to bring other people joy,” says Swayne. “And that was enough.”

Here are some tips for the Class of 2017 from Swayne: