Dartmouth welcomed leaders from its partners in the international Matariki Network of Universities to Hanover September 9 and 10, 2013, for the consortium’s first conference on research in the humanities. 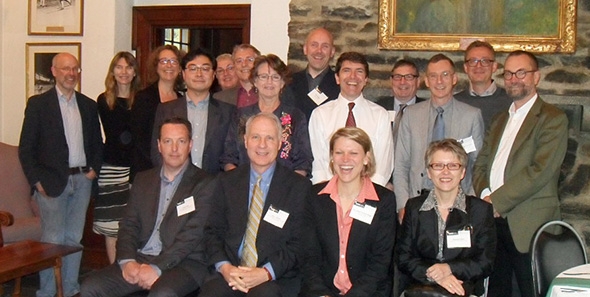 Convened by Leslie Center for the Humanities Director Colleen Glenney Boggs, professor of English and of women’s and gender studies, and Dean of Libraries Jeffrey Horrell, the gathering brought a diverse group of scholars and librarians face to face with their Matariki colleagues from around the world. It also gave the visitors firsthand experience in how Dartmouth uses its rich resources in the humanities—the collections held in Rauner Special Collections Library and the Hood Museum of Art, in particular—to foster the creation of new knowledge in the humanities.

The conference group included academic deans, library directors, faculty members, and librarians from the partner institutions. The network, launched in 2010, unites, as its website notes, “scholarly communities where excellence in research and education take equal priority; where leading researchers are directly engaged in all aspects of teaching; and where education is considered as a combination of academic learning and personal growth in a diverse community.”

During the summer of 2012, astrophysicists came to Dartmouth from around the world for a research conference on black holes, a program overseen by faculty from Dartmouth and from Durham University. Other international Matariki gatherings have looked at research ethics in the life sciences and renewable energy.

The September 2013 meeting, Boggs reports, focused on “advancing the humanities component of the Matariki Network and its paired focus on library research and resources. We shared information on current best practices in humanities research and teaching, which reaffirmed the key role that the humanities play at the heart of these like-minded teacher-scholar institutions.”

In addition to time spent in small working groups and joint sessions, attendees met with Dartmouth Special Collections Librarian Jay Satterfield for a demonstration of how hands-on engagement with primary sources can be a resource for the classroom experience while laying the groundwork for independent research by students as their undergraduate careers progress. Satterfield walked the group through an exercise used in a Dartmouth class that draws on documents linked to a smallpox outbreak near Hanover in 1777. The exercise, Satterfield explains, introduces first-year students to essential skills of humanities research: putting primary source documents in conversation with one another, taking note of questions that remain unanswered, and pursuing explanations to fill those gaps. He notes that during the 2012-13 academic year, Special Collections offered 241 teaching sessions with 89 classes representing 28 departments.

Michael Taylor, director of the Hood Museum, introduced the Matariki group to how Dartmouth uses the rich holdings of Dartmouth’s art museum to foster the discovery of new knowledge in the humanities. “As a teaching museum, the Hood Museum of Art’s mission is to create an ideal learning environment that fosters transformative encounters with original works of art,” he says. “The Hood’s rich and diverse collection of artworks from around the globe offers unique opportunities to create conversations, debate, and dialogues, which I see as one of the great benefits and contributions of the Matariki conference.” Taylor and the group explored “Picasso: The Vollard Suite,” on display at the Hood through December 20, 2013.

The libraries of the Matariki institutions have been collaborating on a benchmarking project since May 2011, setting protocols for working across an international network, tackling potential barriers to collaboration such as differing academic calendars and differences in languages, local cultures, and idioms. Members of that benchmarking team, which includes Dartmouth Associate Librarian for Information Resources Elizabeth Kirk and John Cocklin, librarian for economics and social sciences, met to further their work on assessment.

Horrell reports that the gathered librarians were “able to discuss our preliminary benchmarking activities across the network and to develop a number of potential collaborative opportunities going forward, specifically an assessment of how the library supports the student learning experience in collaboration with other groups on campus.”

The librarians also discussed the “development of a virtual forum for sharing among our special collections staffs, creating a prominent Matariki presence on our library websites, exploring staff exchanges between our respective institutions, and arranging library privileges for visiting Matariki scholars in concert with our universities’ international offices,” Horrell says.

Building on the success of the Dartmouth meeting, Boggs says, the Matariki Network will launch a series of meetings to build international connections among specialists in various fields and consider best practices in use at the various member institutions. “These meetings,” she says, “will culminate in a larger exchange about the humanities as an engine of not only scholarly but also social innovation.”

As the gathered scholars return to their home institutions, the hope, Boggs says, is that they will continue as advocates for an international outlook on the humanities:

“The ultimate goal is for us to keep going the momentum that we developed here at this groundbreaking meeting at Dartmouth, namely towards articulating the international outlook of the humanities, and the contributions that the humanities and international dialogue make to one another.”

That goal has particular value for Dartmouth’s role in the world: “We are well on our way towards envisioning a ‘moveable feast’ of sorts—a mobile and multi-faceted Matariki humanities network that will enhance the work of Dartmouth faculty and their impact on the global humanities.”