Read the full story by Kevin Nance, published in the September/October 2013 issue of Dartmouth Alumni Magazine.

“You’re going to kill me,” Daniyal Mueenuddin ’86 joked to his literary agent not long ago. “I’m writing a book set in America.” 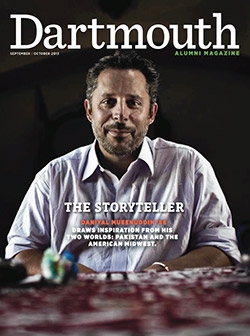 Perhaps he was only half-joking. Mueenuddin, after all, is best known as the author of In Other Rooms, Other Wonders (W.W. Norton, 2009), an acclaimed collection of linked short stories set in the mid-20th century on a farm in rural Pakistan, where he was raised. A finalist for the National Book Award, the volume earned its author comparisons to Chekhov and a devoted following of readers enchanted by its portrait of a crumbling feudal society with its elaborate hierarchies and network of carefully calibrated, often fiercely competitive relationships among the farm’s workers and their families. It remains to be seen how readers will react to Mueenuddin’s recently completed and yet to be published first novel, I. Want. You. To., which is set in Wisconsin and New York City from the 1980s to the present.

The novel—its title is a phrase from Chapter 11 of James Joyce’s Ulysses, which Mueenuddin discovered at Dartmouth and which maintains for him the status of holy writ—is the story of Kristal Slama, a smart, beautiful young woman with working-class roots in Black Earth, Wisconsin. “She’s from the kind of people who have lots of abandoned cars in the yard,” the author explains, “and tied-up dogs who aren’t fed properly.” But Kristal’s life is transformed, for better and worse, when she’s taken under the wing of a worldly couple in Madison and later becomes a graduate student in Manhattan. There she finds material success and heartbreak as the wife of a wealthy lawyer. Conspicuously for Mueenuddin’s fans, the novel has, as he puts it succinctly on a balmy recent afternoon in Madison, “nothing to do with Pakistan.”

Are you kidding me? I made that movie.