Study: Tiny Fish Might Hold a Big Answer for Aquaculture

Several hundred Nile tilapia (Oreochromis niloticus) are currently swimming in tanks in the basement of Dartmouth’s Class of 1978 Life Sciences building. These tiny fish are part of an experiment being conducted by Anne Kapuscinski and her lab, which may lead to a more sustainable future for aquaculture. 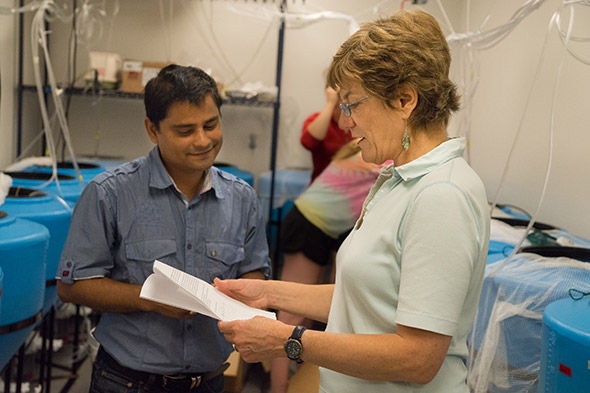 Senior Research Associate Pallab Sarker, PhD, at left, and Professor Anne Kapucinski conduct an experiment on the use of microalgae as a sustainable feed ingredient for aquaculture of tilapia. (Photo by Eli Burakian ’00)

Tilapia are the second most important farmed fish in the world by volume, says Kapuscinski, the Sherman Fairchild Distinguished Professor of Sustainability Science, “and we know that aquaculture is going to be increasingly important for achieving food security around the world. It’s the fastest growing food sector, but it’s growing in some ways that are unsustainable and raise real problems.”

Among these problems are the diets of farm-raised fish, which are fed diets consisting largely of fish oil and fish meal harvested from such fish as anchovies and menhaden. The production of this commercial fish feed is leading to over-fishing of these species, says Kapuscinski, the chair of Dartmouth’s Environmental Studies Program.

An earlier study led by Kapuscinski’s senior research associate Pallab Sarker, PhD, which was published in Reviews in Aquaculture in 2013, found that aquaculture production consumes more wild fish (in the form of protein and oil from pelagic fishes like mackerel, herring, anchovies, menhaden) than it produces in the form of edible meat from farmed fish, resulting in “a net removal of fish on a global basis.” 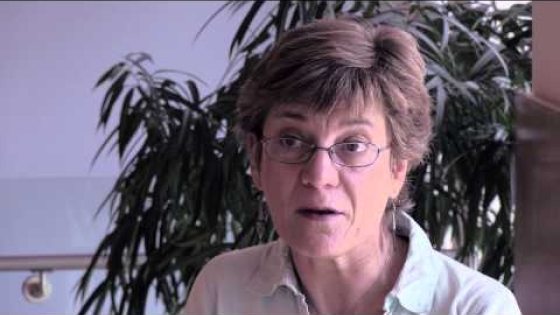 “Right now aquaculture is consuming the overwhelming majority of fish meal and fish oil, and unfortunately, they come from marine species that are really healthy and desirable for humans to eat, things like anchovies, herring, mackerel,” says Kapuscinski.

“So people have been increasingly asking, why are we harvesting these fish that people could eat and grinding them up for fish meal and fish oil and putting them into diets to raise other fish, and using up fossil fuel to do this?

“We’re trying to find some sustainable substitutes. Micro-algae as a possible substitute are ideal for a species like tilapia that feeds low on the food chain and feeds on algae in nature.”

The current experiment began August 1, and is the second phase of a study that began in winter 2013. In phase one, Kapuscinski and her lab studied how well the tilapia digested three different types of micro-algae and compared this to the digestibility of food made with fish oil and fish meal. In that first experiment, one type of marine micro-algae that is high in omega 3 fatty acids came out on top, and the diet with this micro-alga proved more digestible than the commercial diet.

As Kapuscinski explains, they are now testing how much marine micro-algae can be fed to the tilapia. “We’re going to evaluate what percent replacement (of micro-algae) still gives good fish growth, good fish survival, and also measure how much it raises the omega 3 fatty acid content of the flesh of the tilapia. Boosting that flesh concentration of the omega 3 fatty acids would make the tilapia even healthier for people to eat.”

This current experiment will conclude by the end of 2013, and then the team will publish its results. If the study shows that a higher percentage of micro-algae can be added to commercial fish feed and is more digestible, it will help reduce the water pollution (eutrophication potential) created by fish waste, says Sarker, who has performed aquaculture research in Bangladesh, Japan, and Canada.

“The current aquaculture diet produces excessive phosphorous levels in aquaculture effluents,” says Sarker. “Results of our first experiment suggest that incorporating micro-algae into the diet led to more efficient retention of the diet’s phosphorus, and this will also lead to cleaner aquaculture effluents and cleaner water.”

Kapuscinski and her colleagues are dedicated to trying to solve the “big sustainability challenges that are facing humanity around the world.”

She is part of a Dartmouth collaboration that brings together faculty and students from environmental studies and Thayer School of Engineering and private sector practitioners to study the capacity of integrated food-energy systems (IFES) to produce both healthy food and environmental benefits.

Dartmouth’s IFES team was recently invited by the United Nations Food and Agriculture Organization to be a partner on a “high impact opportunity” to assess the sustainability of integrated food energy systems around the globe, says Kapuscinski.

“This fits perfectly with our current agenda, which includes, among other things, developing a global database of IFES cases; establishing an international IFES network for practitioners, researchers, and observers; and analyzing environmental, socio-economic, and policy factors affecting adoption and outcomes of IFES cases. We’ve got a lot of important work ahead of us and we’re very excited about this partnership.”