The 2013 Stretch Student Saga: A Change in Course

Professor Carl Renshaw and 11 students just completed an unanticipated venture into the flood-ravaged canyons of Boulder, Colo. This was a detour in their 10-week off-campus odyssey known as “the Stretch.” Their original destination—the national parks—had been rendered inaccessible by the Federal government shutdown.

In a period of eight days, from September 9 through 16, Boulder experienced more than 17 inches of rain, amounting to what the National Weather Service called a 1,000-year rain, causing a 100-year flood. Houses were toppled and cars were carried away by the raging torrents rushing through the Colorado canyons. 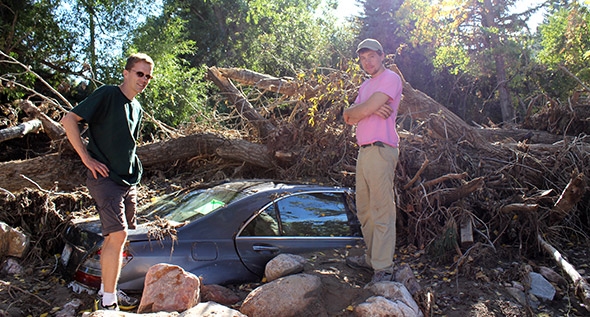 “Although the Boulder floods presented us with a tremendous research opportunity, they were also catastrophic for many who live in the area,” says Renshaw, a professor in the Department of Earth Sciences and an adjunct professor in the Thayer School of Engineering. “So in addition to mapping the flood damage, we also spent a day assisting with flood recovery efforts. This was service learning at its best.

“The Stretch is experiential learning,” he says. “There are just things you can’t really do in the classroom, and there are problems you can talk about, but you don’t really get a sense of what it’s all about until you can see them.”

Accompanying the group was a videographer. “Our original intent was to have the videographer collect footage that we could use to demonstrate different field methods in our classes and for possible forays into online learning,” says Renshaw. But after several days of talking to the students, the videographer decided to also document how the shutdown and closure of the national parks was affecting the Stretch. 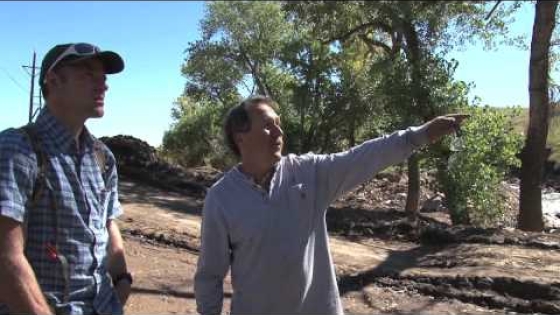 The trek to Boulder was conceived by Renshaw while the group was still at Yellowstone National Park just days before the government shutdown. He had begun his two-week Stretch stint with them on September 29. Sensing that the shutdown was going to happen, denying them access to the other parks on the itinerary, he rerouted the group to Boulder.

“The closure of the national parks and the diversion of the Stretch to Boulder gave the students a chance to be part of authentic research, testing some of the ideas about flood damage that we’ve developed from our work following Tropical Storm Irene in Vermont, work funded by the National Science Foundation,” Renshaw says.

“What we have been trying to do is to try to come up with ways to predict where erosion is most likely to occur during a flood. We wanted to test some of the tools we developed for Irene to see if they would apply in Colorado, to see if the overarching pattern of floodwater erosion is universal or only specific to what we see in Vermont.”

Renshaw says that the data collected by the students on the Stretch are instructive. “We learned that as long as the stream can control its path, then the methods we developed based on Irene work. But in a narrow canyon setting, the stream is effectively locked in place. The stream doesn’t have a lot of flexibility. If it happens to be right up against the wall of the canyon, that’s where things are going to happen. We don’t have that kind of topography in Vermont,” he says.

“Our challenge now is to find a new way to think about this kind of problem, and see if we can devise a way to do a better job in predicting the consequences of flooding in settings like Boulder.” Next year’s Stretch students may get the opportunity to develop and test those new ideas, he says.

From its beginnings in the mid-1960s, Dartmouth’s earth sciences department has offered the Stretch as a program to expose undergraduates to field techniques and practice them while learning about the spectacular geology of western North America. Throughout the 70 days of the Stretch, a series of faculty members shepherd the students through different outdoors venues ranging from the Canadian Rockies to the Grand Canyon.