Ben Randolph ’15 Makes the Most of Faculty Accessibility

When Ben Randolph ’15 was choosing a college, Dartmouth emerged as a favorite, he says, because of its “excellent study abroad program in Spain, its small size, and the opportunity to work closely with professors.”

What he didn’t anticipate was just how extensive these faculty research opportunities would be. Randolph is now in the midst of his third faculty research project, helping Associate Professor of Spanish Antonio Gómez develop a new comparative literature class. 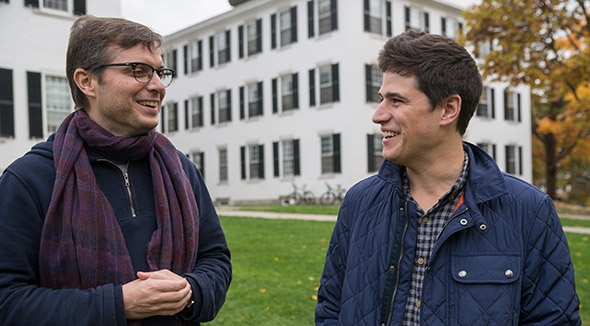 Since the summer after his first year at Dartmouth, Randolph has helped Department of Spanish and Portuguese Professor Pedro Palou (now at Tufts University) research his book about Mexican biopolitics in the 20th and 21st centuries and worked with Spanish and Portuguese Professor Raúl Bueno Chávez on researching transculturation in Latin America, a project Randolph is still working on.

Additionally, he’s performing research with Gómez, helping develop a new class, “Burning Red: Marx and Marxists in Literature and Philosophy,” which will examine Karl Marx and Marxists in literature and philosophy. As Gómez wrote in a course description, “The current crisis of capitalism and neoliberalism has, in fact, re-stressed the relevance of Marxism. … From the perspective of the post-2008 economic collapse, this course aims at critically reevaluating one of the most radical and influential traditions of cultural and political thought.”

Gómez had heard rave reviews from Palou and Bueno about Randolph’s academic abilities, but was especially eager to work with him after they spent a term together during the Madrid Foreign Study Program (FSP) that Gómez led in fall 2012. “He enjoys thinking, playing with ideas, and reshaping his opinion about a text or an issue,” says Gómez, an associate professor of Spanish and Portuguese and associated faculty of Dartmouth’s Comparative Literature program. “His thinking style is flexible, inquisitive, and self-reflective, and he is a multi-talented and multi-directional reader.”

Randolph and Gómez meet weekly to discuss their readings about the historical development of western Marxism and Marxism’s continuing influence. Randolph, a comparative literature major, describes these meetings as a “brainstorming collaboration. We’re looking at different ways in which Marxism permeates literature, but also how different fundamental thoughts in Marxism got into other areas of thought. Right now we’re tracing out what strains of Marxism we want to follow, which means getting as broad a field of reading as we can right now. It’s really interesting.”

Gómez, who is also Randolph’s major adviser, says, “Benjamin always surprises me with ideas and interpretations I had not considered before. Our weekly discussions on different Marx’s and Marxist texts are one of the most gratifying experiences I have had at Dartmouth. Our conversation usually lasts two hours and I always leave these meetings reenergized and restimulated. We rarely come out with clear-cut and definitive answers, but gradually we are achieving a better understanding of the type of difficult questions and challenges that Marxism still poses to us.”

In addition to his faculty research collaborations, Randolph has a jam-packed schedule. He is taking four courses this fall term instead of the usual three. He also works as a tutor in English and Spanish for Dartmouth’s Institute for Writing and Rhetoric (RWIT), and as a house manager for the Hopkins Center for the Arts, supervising student staff during performances, among other duties. This past summer he worked at the New London Barn Playhouse, overseeing the junior intern program.

The personable Kentucky native, who “hopes to be a creative writer and maybe teach writing,” will spend winter term in Nashville working for Humanities Tennessee, a state-sponsored literary organization. He also plans to work on a novel, which will entail reading “primary and secondary accounts of the Spanish conquest of the Aztecs. I’ve had the idea since the winter of my freshman year, and the fact that it’s stuck with me that long is maybe a signal that it’s something I should try to get done.”

For someone who “wasn’t anticipating the opportunities I’ve gotten” as an undergraduate, Randolph cherishes the collaborations and friendships he has established with his Dartmouth professors.

“I feel fortunate to have been able to work with so many smart people for such extended periods of time,” he says. “As much as I’ve loved the classes that I’ve taken at Dartmouth, I’ve grown so much more as a student and a writer because of my one-on-one collaborations with people that are a lot smarter than me.

“In terms of coming to college for academic growth, I don’t know where else I would’ve been able to have such a uniquely beneficial, healthy, challenging experience with professors. It’s been really great.”