Robert W. Staiger, an expert in global trade and international economics and the Stockwell Professor of Economics at the University of Wisconsin, Madison, is the Roth Distinguished Visiting Scholar at Dartmouth for the current academic year. 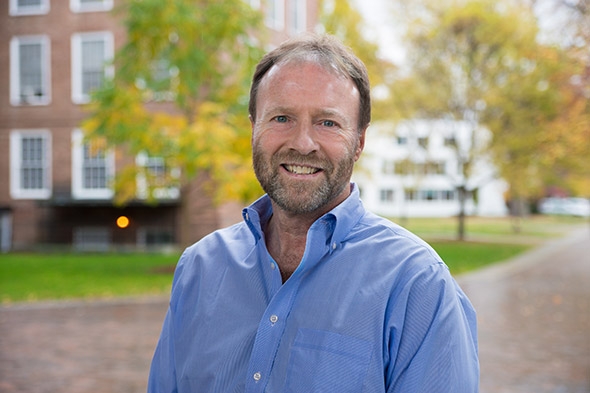 Robert W. Staiger is an expert in global trade and international economics and the Stockwell Professor of Economics at the University of Wisconsin, Madison. (Photo by Eli Burakian ’00)

Staiger researches international trade and the policies, institutions, and behavior of firms that manage, regulate, and distort it. His current project, which he will be working on at Dartmouth, focuses on trade agreements, specifically the negotiations and bargaining member states engaged in during multiple rounds, or meetings, of the General Agreement on Tariffs and Trade, or GATT.

“The Roth gift has given us a wonderful opportunity to engage with Bob Staiger and to appreciate more deeply the links between the U.S. economy and the rest of the world,” says Michael Mastanduno, dean of the Faculty of Arts & Sciences.

The detailed negotiation data for the first five of the eight GATT rounds are now publically available, and Staiger has received a National Science Foundation grant to analyze the information. GATT, a multilateral agreement regulating international trade, was replaced in 1995 by the World Trade Organization (WTO). The five GATT rounds Staiger will analyze ran from 1947 to 1961.

Staiger’s work is a challenging big-data project, with negotiation records comprising many thousands of pages. The work is complicated by the fact that the records are in multiple languages and reflect negotiations over tariffs on product names that were not consistent over time. To process the data, Staiger will need to work with computer scientists, sociologists, linguists, and other economists. Driven by a desire to make sense of both trade agreements and the aims of states that enter into these historic bargains, Staiger explains that understanding the bargaining that was possible under the informality of GATT will help in understanding the global trade challenges under the much more rigid regime of the WTO.

“These data have never before been available to the public, and, among other things, I hope to learn lessons from my research that could help ease the impasse in the current Doha Round of multilateral trade negotiations at the WTO,” says Staiger.

In this way, Staiger hopes to be able to explain and improve on the WTO.

The Roth Distinguished Visiting Scholar is endowed by Daryl and Steven Roth ’62, Tuck ’63, and their family to enhance the Dartmouth community by bringing to campus exceptional thought leaders who will inspire students and broaden the range of intellectual inquiry on campus. Steven Roth is a Dartmouth Trustee. Last year’s inaugural Roth Scholar was photojournalist James Nachtwey ’70.

“I am honored to be Dartmouth’s Roth Scholar for this academic year,” says Staiger. “With its stellar faculty and student body, stimulating intellectual atmosphere, and stunning physical setting, Dartmouth is truly a unique institution.”

As a Roth Scholar, Staiger will give talks, visit classes, and connect with colleagues across the arts and sciences and at the Tuck School of Business.

A graduate of Williams College, Staiger received his PhD in economics from the University of Michigan and has held positions at Stanford University and Wisconsin. In addition to his scholarly appointments, Staiger serves as editor of the Journal of International Economics, is the American Law Institute reporter for Principles of Trade Law: The World Trade Organization, and is a research associate at the National Bureau of Economic Research. He has been awarded six National Science Foundation grants, published more than 50 articles, and been recognized with multiple honors for his teaching and scholarship.

While undertaking this large research project and getting to know the Dartmouth community, Staiger says he’ll rely on the support of family—specifically his younger brother, Doug Staiger, the John French Professor in Economics and chair of Dartmouth’s Department of Economics.

“It’s fun to have my younger brother sitting in the office just across the hall, where I can keep an eye on him,” says the elder Staiger. “And if I need further inspiration, I can drive two hours to the historic Mount Washington Hotel in Bretton Woods, N.H., where the GATT, the precursor to the WTO, was created almost 70 years ago.”