Jason Herrmann is a wizard of sorts—an electronic archaeologist. Herrmann’s is the face of the modern archaeologist, revealing the relics of ancient peoples without even planting a shovel in the dirt. The tools of remote sensing—ground-penetrating radar, orbital satellites, magnetometers, and electrical-resistance meters—are his stock in trade. 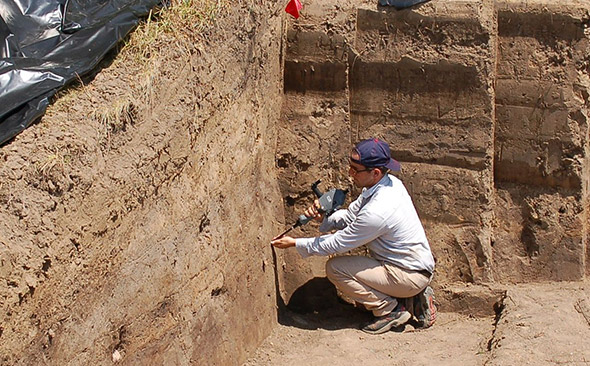 Herrmann came to Dartmouth from the University of Arkansas as a Neukom Fellow—part of a Neukom Institute postdoctoral program that provides support for recent PhDs. “I am one of three fellows from last year, the program’s inaugural year, and we are all doing wildly different but interesting work,” he says. “We get financial support, a departmental and institutional home for two or three years where we can develop our research, and we teach one class a year.”

“Jason Herrmann is a member of our first class of fellows and is now among seven Neukom Fellows, whose work spans 14 departments and programs at Dartmouth,” says Dan Rockmore, director of the Neukom Institute and the William H. Neukom 1964 Distinguished Professor of Computational Science.

These postdoctoral fellowships are for people who use computing as a central component of their research and bridge two disciplines. Herrmann’s bridge is between anthropology and geosciences and uses computer-based remote sensing to do his work.

“The Fellows bring great energy and new ideas to campus. They represent a new generation of interdisciplinary scientists,” says Rockmore. “Their work embodies the cutting edge ways in which computation and computational science are making possible great advances across disciplines. Jason is a wonderful example of the kinds of talent the program is attracting. He’s a great addition to the Dartmouth faculty.”

The Neukom Fellows Program is a key part of the mission of the Neukom Institute. The institute was established in 2004 with commitment of $22 million by William H. Neukom ’64, former Dartmouth Trustee and former executive vice president of Law and Corporate Affairs at Microsoft Corp.

Herrmann describes himself as “a landscape archaeologist who studies ancient settlement patterns and ancient human-environment interactions.” At the site of Saruq al-Hadid, in Dubai, he used a combination of traditional archaeological excavation, ground-penetrating radar, and satellite data to paint a picture of environmental change from the Neolithic through the Iron Age. “Working in southeast Arabia is a nice laboratory for seeing how people respond to very slight changes in their environment, changes in precipitation or moisture from ground water,” he says.

Herrmann found that the environment around Saruq al-Hadid, which was once much more moist than it is today, became increasingly arid in the second and first millennia B.C. The lives of its people also changed, keeping pace with its environment. What had previously been an oasis serving as a prehistoric “truck stop” became a small ceremonial center, perhaps without permanent residents.

Moving his focus forward 500 years, he found that it changed again. “The people at Saruq al-Hadid were now working on metal, making very fine artifacts,” he says. “There were gold and carnelian beads brought from India and Pakistan and tons of iron blades.” These objects suggested to Herrmann that what was once not much more than a watering hole became a center of production tied into an international economy.

From the dunes of Dubai, Herrmann moved on to the big city—Zincirli Höyük in southern Turkey. “Höyük” is Turkish for mound, and this one is in the middle of 100-plus acres of ruins of the walled Iron Age city of Sam’al. “There are 30 to 50 feet of cultural debris in the central mound, and we only understand the top 10 feet of it,” he says.

Herrmann worked his magic, mapping most of the site during 2007, ’08, and ’09, using a magnetometer. This instrument detects slight fluctuations in the Earth’s magnetic field that signal disturbances attributable to human activity. “You cannot see anything on the surface, but with the geomagnetic survey data we could see concentric streets, separating a series of very large architectural complexes, some of which rival the size of the palace buildings in the city’s center,” he says.

In a setting quite different from his Near East exploits, Herrmann has also been working at the Mound House site on the Illinois River floodplain. The site is an example of the Hopewell cultural tradition, known primarily from the hundreds of mounds its people built along Midwestern river valleys. As much a trading network as a culture, the Hopewell flourished during the Middle Woodland period (1 B.C.-500 A.D.).

For the last four summers, Herrmann has taught field schools there for the Center for American Archeology. “We began by teaching students remote sensing as part of the extended field school, where they learned traditional archaeological methods as well,” he says. “I also worked on the development of a research project imaging the internal structure of these mounds.”

This research focused on the site’s Mound 1, which is 50 meters across and six meters high. “Part of it has been dug so we kind of knew what we were looking for but we wanted to test whether our remote sensing methods would work, basically mapping the internal structure of these mounds,” Herrmann says.

Remote sensing is particularly useful since the mounds frequently contain multiple burials. “It would be unethical to dig up some of these mounds, so we are looking to remote sensing to generate new archaeological information,” Herrmann says. “I think to fully understand the internal structure of these mounds and what it represents, we need a larger sample of them than we have.”

Also sponsored by the Neukom Institute, Herrmann will host a remote-sensing workshop on March 20 to 22 that is expected to attract scholars from around the world. Entitled “Digital Domains,” it will focus on the investigation of human environments and will be open to the Dartmouth community.