One of the last places you’d expect to find an environmental studies major is working on an oil refinery. But that’s exactly where Maya Johnson ’14 was this past summer.

“It made me see things from the industry perspective,” Johnson says. “It was very interesting.” 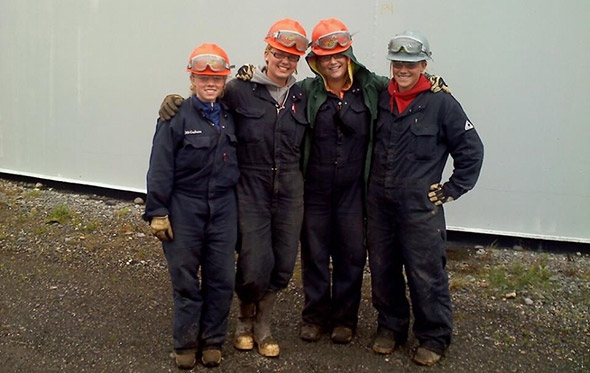 Maya Johnson ’14, second from left, with some of her co-workers at the Tesoro Oil Refinery in Kenai, Alaska. (Photo by Jacob Gilman)

Count it among the many interesting challenges Johnson has taken on. An Alaska native, she’s studied abroad twice, in Hungary and Scotland. She’s on the equestrian team, works as a Sexual Assault Peer Advisor, interns for the Environmental Studies Program, studies Russian, and is working on a senior thesis. An avid horseback rider, she has a network of scars on her forearm from a fall that caused a compound fracture. (“It’s a very exciting sport,” she says, in typically understated fashion.)

Johnson decided to take the manual-labor job at the Tesoro Oil Refinery in Kenai, Alaska, because she thought it would be a good educational experience. She was right. “Every morning we would have a safety meeting and the supervisor would assign us on different crews with different jobs,” she says.

As she did odd jobs—cleaning equipment, pulling weeds growing near oil tanks, and generally doing the work that, she says, “no one wants to do”—Johnson developed a useful perspective.

“I loved working at the oil refinery,” she says. Her work enhanced her understanding of the environmental and economic issues related to the industry. She was particularly interested in seeing how the Environmental Protection Agency’s regulations affected the day-to-day operations of the refinery. She was able to see the point of view of oil companies, which she hadn’t fully appreciated until then.

“For the moment, everyone needs cars and therefore gasoline,” says Johnson. “We might as well get oil in an environmentally safe way.”

Being able to see both sides of these types of issues should be a big help in the future—Johnson hopes to pursue a degree in environmental law after graduation.

For now, she is working on her senior thesis, which examines the Flathead Lake area in western Montana. Johnson chose to study Flathead Lake, the largest natural freshwater lake west of the Mississippi, to see how water quality influences the amount of water available to a region.

“There is an interesting dichotomy between the state and tribal water regulations and water rights,” says Johnson, referring to legal disputes that have arisen between the two groups. “I am focusing on this area in particular because there are both tribal and state regulations rather than it just being controlled by one entity.”

“She is tackling the critically important and understudied interaction between water quantity and quality issues, and is doing so in the context of water-resource disputes between tribal and state governments,” says Jones. “The interdisciplinary nature of her work will make it of interest to a wide range of scholars, policy makers, water resource managers, and those interested in the environmental justice issues related to disputes between state and tribal governments.”

Johnson is particularly thankful for the opportunity to study abroad, undertake her own research project, work at the oil refinery, and get involved in numerous activities on campus. “Dartmouth has been so great. I want to make sure I take advantage of all it has to offer during my last year here,” she says.

And what’s next? Johnson, who spent a term interning for a Brooklyn law firm, hopes her thesis work will help in her future legal career. But if that doesn’t pan out, she may have a job waiting for her at a certain Alaskan oil refinery.